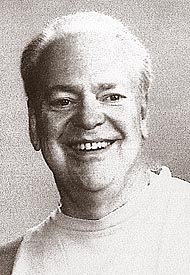 On Saturday, Oct. 5, at 6:30 p.m., there will be a celebration of the life of Bradley Bennett Johnson at the Dayton International Peace Museum, located at 208 W. Monument Ave. in Dayton, Ohio. Bradley died at age 78 during open-heart surgery in Cleveland. He lived and worked in Yellow Springs for several years, so we invite all who knew Bradley to join us. It is free. Please park behind the building or on the street. There will be music by Michael Kalter and his group, snacks to eat and the opportunity to hear a CD of Bradley singing and playing his guitar on songs we know or that he composed.

Bradley was born in Dayton, graduated from Oakwood High School, lived in Yellow Springs and ended up in Athens, Ohio. Divorced early, he left two daughters and several grandchildren. He also left his older brother, Dr. Vaughan Johnson, and wife, Pat, and his older sister, Christine Dull and husband Ralph. He was beloved by his family and friends, and even the men wept when they heard of his death. As for Brad, he was unafraid and was at peace when leaving this world.

Though he had no degrees after high school, he taught himself to blow colored glass into beautiful vases and bowls, which he would give away. He was in the Navy and sang baritone in the Navy Choir in Chicago. He also played the guitar, giving audiences uplifting music. He was a superb cook and often cooked for his friends. He read many books and then gave them to others. He was a teacher, because every Sunday afternoon, people would gather around him and study and discuss books chosen by him and recommended to his friends and relatives who didn’t live near him. The book they were studying when he died was entitled “A Course of Love.” He was an enlightened person in understanding, awareness, self-education, wisdom, culture and insight. His enlightenment is another way to say “the state of arranging spiritual knowledge or insight.”

As his nephew John wrote: “Today, Earth lost a truly transcendent soul. My Uncle Brad was never very good at negotiating this material world, though his mother said he was a genius. Every year, he sent me a Christmas card, inscribing in his shaky handwriting some beautiful poems and sayings. He had a quick wit and a sly grin, he was an artist, a musician and raconteur, frequently rattling off quotes from historic figures, philosophers and spiritual gurus. Rest in peace, sweet uncle. you were much-loved, loved much and will be remembered fondly. To quote Don McLean, ‘This world was never meant for one as beautiful as you.’”