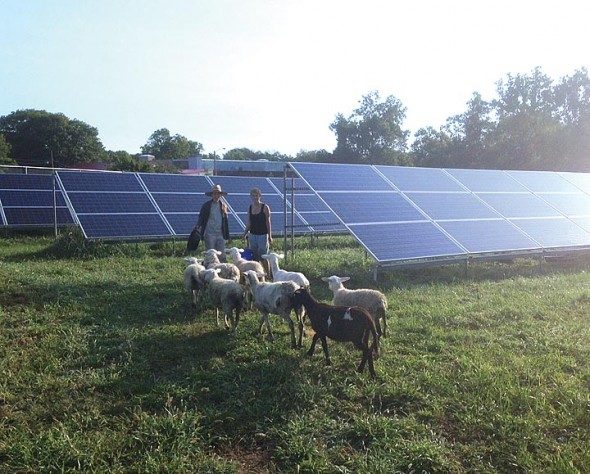 Would that you could live on the fragrance of the earth, and like an air plant be sustained by light.
But since you must kill to eat, and rob the newly born of its mother’s milk to quench your thirst, let it then be an act of worship. — Khalil Gibran, The Prophet

Antioch College’s farm was controversial from the start. The same with its solar panels. It shouldn’t have surprised anyone that a college with a tradition of balancing theory with practice would take institutional actions that dovetail with concepts learned in the classroom. Responding to the planetary challenges of our time, Antioch took courageous steps to “walk its talk.” It wasn’t too far ahead of its time, it was right on time. Yet both projects received community pushback.

It’s OK to critique our institutions. It’s how we improve. But when good faith efforts to nudge our neighbors turns into relentless haranguing — or even harassing — it’s time to back off, take a breath, and re-assess. This is the case with regards to the latest challenge to the Antioch farm: a months-long campaign to not kill for food the lambs currently grazing under the solar panels.

Because the kind of moral absolutism driving such a campaign is myopic, it would help to take a step back to look at the bigger picture. Context is everything, and an honest look at Antioch’s place in the global food system would highlight its differences from the inhumane factory farms truly driving climate change, the pollution of our waters and depletion of our soils.

Another context is time. Those farming and sourcing food at Antioch (and elsewhere) are already up against a lot these days: Regulations pushed by powerful agri-business that have decimated local farms, food processing facilities and distribution networks; eaters who have, for generations, become accustomed to meat-heavy, processed-food diets while sheilded from the negative impacts of their food choices. The footholds we have in a greener, more caring world are tenuous. How much longer before the small, humble farmers keeping traditional ways of raising animals give up?

In college, I took a Sustainable Agriculture class. Unfortunately, leaders at Miami University did not have the vision to have a working farm on campus (or locally sourced food options in its dining halls for that matter). Instead we spent time with an area farm family. I visited with, and interviewed, a family of Miami Indian heritage who grew vegetables, made soap and raised chickens and rabbits for meat on a small homestead in the country. On a morning that spring, I helped slaughter and butcher the chickens. Ritual preparations were made. Gratitude was offered. The eldest son, at the time a teenager, led the process and was solemn, efficient and reverent.

After a lifetime of eating meat, it was the first time I participated in, or even saw, how it was done. The experience was life-changing. First, it gave me a valuable understanding of a cultural context for farming, in this case how growing food and raising animals, for an indigenous family, could be tied to self-sufficiency, sovereignty and resistance to oppression. Feeding themselves from land stolen from their ancestors was an act rooted in a tradition and accomplishing a reclamation that was, quite frankly, beyond my grasp. On what grounds could I judge their ways of living and eating?

Second, after a sanitized suburban upbringing, I finally had to confront my discomfort with killing to eat. I faced the truth that something must die for me to live, whether plant or animal, and realized the importance of ensuring it is done as compassionately as possible. Just as I did, Antioch students who see where their food comes from — and witness the sacrifices made to bring it to their plate — will likely have a deeper understanding and appreciation for it. And on this planet, in these times, respect and gratitude go a long way.