Margaret ‘Peg’ Champney— A life entwined with the News

Margaret “Peg” Champney. whose longtime residence in Yellow Springs was closely intertwined with the life and history of the Yellow Springs News, died Tuesday evening, Nov. 5, after a brief illness. She was 87.

A quiet, steady presence at the News throughout her adult life, Champney’s 68-year tenure at the local paper likely qualified her as its longest serving employee.

She began her relationship with the News in 1951, as a recently married 19-year-old Antioch student. 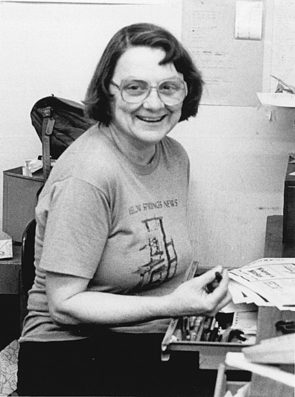 Her husband, Yellow Springs native Ken Champney, had not long before moved into the position of production manager at the paper, hired as a printer’s apprentice in 1949 under then owner Ernest Morgan.

But soon after the couple were wed, they learned that Ken would be going to prison for declaring himself a conscientious objector and refusing to serve in the Korean War.

Peg dropped out of Antioch and assumed Ken’s responsibilities at the paper — then edited by Kieth Howard — while Ken served nearly two years in a West Virginia prison.

According to a 1996 YS News article written when Peg was inducted into the Greene County Women’s Hall of Fame, the diminutive young woman “had five months [before Ken’s incarceration] to learn to set type, run a press the size of five pool tables laid side by side, keep the linotype machine with its many moving parts in working order, and other production chores.”

The manual, mechanical labor was “not my bent, but it was exciting,” Champney told News reporter Peggy Shank for the 1996 profile story.

Released from prison in 1953, Ken returned to his previous position at the paper, where his eventual 45-year career there included tenures as publisher, a brief stint as editor and as the long-time co-owner with Howard and eventually Don Wallis.

Life at the News turned fraught after Ken’s return, however, as the future of the increasingly pacifist, progressive-leaning paper was immediately threatened by a Joseph McCarthy-supporting publication called the Yellow Springs American. When the rival weekly paper failed to shutter the News, its backers then tried, unsuccessfully, to buy it.

With that challenge met, and Ken back operating the presses, Peg continued to help out in the News offices “until the babies began to arrive,” she said in the 1996 interview. The couple had five children and cared for numerous foster children.

At the same time, Peg served as an unpaid teacher at The Vale School, a Montessori-style primary school located for over 30 years in The Vale intentional community off East Hyde Road, where the family made their home and Peg still lived at the time of her death.

The couple sought to live as simply and sustainably as possible, keeping their earnings low enough and their charitable contributions high enough so as not to pay federal income taxes.
Opposition to U.S. military spending prompted the Champneys’ personal tax action and also led the News owners for a time to refrain from withholding a portion of employees’ taxes proportionate to federal military funding.

The Champneys, who were active in the Yellow Springs Friends (Quaker) meeting, also volunteered printing services to the fledgling newsletter of the Peacemakers, a national activist group dedicated to nonviolence.

Under Champney/Howard ownership, the News also implemented a liberal health insurance plan for employees and their families that continued for many decades.

Bill McCuddy, who worked as a printer and photographer in the late 1970s, recalled last week that employee wages were low, but the owners made working for the News sustainable in other ways. McCuddy said that when they learned he didn’t have reliable transportation, they loaned him the money to buy a car.

Peg eventually spent more time back in the News office, focusing on accounting and serving for decades as the paper’s part-time bookkeeper, even after Ken, who died in 2011, sold his ownership shares in the early 1990s.

She typically completed the 2.5-mile one-way commute via bicycle into her last decade.
And although her responsibilities decreased in the last year of her life, she continued to work in the News office at least one day a week until the week before her death.

A music lover who played piano, violin, viola and sang, participating for years in the YS Community Chorus, Peg also co-founded Friends Music Camp with friend Jean Putnam in 1980, teaching hundreds of young people lessons not only in music-making, but also in community building based on principles of inclusion, respect, equality and love. (See the obituary of her life written by her family on Page 8.)

At the News, Champney is remembered as an unassuming, practical worker with an eye for detail and unflagging commitment to the newspaper.

“Peg was a steady, enduring presence at the News before, during and after my tenure there,” Amy Harper, a co-owner and editor in the 1990s and early 2000s, wrote this week in an email.
“Beneath her gentle, calm, and unassuming exterior, was a strong, rock solid, capable woman,” Harper wrote. “I always felt we were in good hands with Peg.”
Champney is also remembered fondly for her frugality.

Karen Gardner, a former co-owner with Harper and the late Doug Hinckley and the paper’s advertising manager during that period, smiled at the memory this week of Champney’s penchant for reusing old file folders until they fell apart.

“She and Ken reused everything,” Gardner said.

Harper wrote that the word integrity came quickly to mind for her when thinking about Peg.
“She and Ken both walked the talk as pacifists during their lives, choosing to live simply, taking salaries from the News that kept their income low so their taxes would not be used to fund war,” Harper wrote, adding, “She was a constant presence, regardless of the weather, among the group who gathered every Saturday at Xenia Ave and Limestone with their signs protesting war and calling for peace.”

Immediate past editor Diane Chiddister, who was a co-owner from 2006 to 2018, remembers Champney’s dedication and diligence.

“Peg was just her dependable self, quietly walking in and out the back door of the News, doing our bookkeeping, helping us out,” Chiddister wrote in an email last week.

Chiddister added that during a financially difficult time for the News, around the turn of the 21st century, the Champneys “stepped up” and “fronted a loan … that kept the News going.”
For former printer McCuddy, Peg always seemed “low-key” and “self-effacing,” but she had a strength of character that is rarely encountered.

“Both she and Ken each had the courage of their convictions,” McCuddy said.