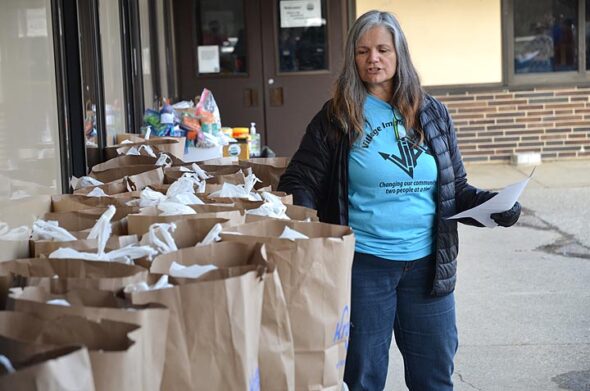 YSHS Intervention Specialist Donna Haller is pictured assisting in food distribution to Yellow Springs School students in mid-March. The district has decided to extend the program through the end of June. (Photo by Matt MInde)

School may have concluded for the summer, but the Yellow Springs student lunch and breakfast program is continuing for an additional month, through the end of June.

Donna First, director of student services for Yellow Springs Schools, said this week that a federal waiver that allowed the district to deliver food to students’ homes during the COVID-19 shutdown also permitted the extension of the meal program.

Since the statewide school closure in March, the local district has been delivering food twice a week to nearly 190 students affiliated with Yellow Springs Schools’ meal service. First said that 25–30% of Yellow Springs students qualify for the federal free or reduced meal program. But district officials widened that circle, deciding early on to include other children — such as pre-schoolers and career center students — in homes being served, as well as any child whose family asked for assistance.

“We didn’t turn away anyone who said they were in need,” First said.

The federal program allows for a financial reimbursement to the district for students who qualify, but not others. The district wasn’t able to provide the cost breakdown for the district before press time this week.

As with the deliveries during the school year, the district’s food service provider, The Nutrition Group, is continuing to assemble the daily lunches and breakfasts; the local food pantry is providing a variety of staples for family dinners; and school staff members are distributing the food to children’s homes.

While the state administers a federal summer feeding program each year, First said that Yellow Springs Schools doesn’t qualify for it, as a district must have at least 50% of its students in the free or reduced lunch and breakfast program. But there’s obviously a need here, First said, thus the decision to continue with school meals another month.

Toward that end, First and The Nutrition Group’s local manager Michelle Martin were among representatives from four regional school districts who took part Wednesday, June 3, in an online webinar to discuss ways public schools might introduce more fresh, local produce into the school menu.

The webinar was recorded and will be posted on the land trust’s website at http://www.tecumsehlandtrust.org/connecting-to-nature.

In opening the discussion, TLT’s director, Krista Magaw, said one of her interests at the land trust is addressing the question of how we can make our local food networks more resilient. Schools can have an important role to play in sustaining that network, she said.

For her part, Rachel Isaacson, a recent Antioch graduate who now works with Agraria, said her interest in “farm to school programs” began during her undergraduate studies. In focusing her senior project on the topic, she said she found three major components, with at least one necessarily present, in any successful effort.

One is effective procurement, another is the hands-on experience of school gardens and the third occurs when food production is part of the curriculum, Isaacson said.

Each of the area school panelists, representing Benjamin Logan Elementary in Bellefontaine, Cincinnati Public Schools, Springfield City Schools and Yellow Springs, had experiences with different aspects of those criteria.

With 63 schools in the Cincinnati system, and a cook at each school, districtwide procurement of fresh produce was her biggest challenge, according to Lauren Marlow, a dietician and the supervisor of nutrition for the urban district. She said her district addressed the issue by contracting with a local distributor who connects with small farms in the region, including northern Kentucky.

“We have a passion to serve healthy food to our students and to support the local economy,” Marlow said, noting that the district spent more than $230,000 on produce last year, even with the school shutdown, during which the district went from serving about 25,000 total students a day to the 3,500 on free or reduced meal plans. She said they hope to increase that amount in 2020–21.

Smith, who is also the director of the Logan County Land Trust, said the school’s efforts have included the creation of an environmental science club, the construction of on-site raised-bed gardens, in-class mushroom log inoculations, the establishment of a bee hive on school grounds, and regular food tastings to introduce students to unfamiliar fruits and vegetables.

Other curricular elements include writing about food and food production in English classes.

Kerns said one of the lessons he’d learned was the importance of getting the whole school community on board, especially the grounds staff, whose jobs could be affected by student gardening activities.

While Cincinnati and Benjamin Logan’s efforts came from within the school communities, a gardening initiative in Springfield came from outside the schools, through the nonprofit group Springfield Ohio Urban Plantfolk, or SOUP. Sherry Chen, a co-founder of the organization, spoke during the webinar about introducing two school gardens, along with a community garden near a school, all in an area of the city considered to be a food desert for its lack of grocery stores selling fresh produce.

She said grant money got the gardens started, and community partners and neighbors have helped keep them going. But she noted that limited resources in the area and struggling schools with overwhelmed staffs were continuing challenges. Time, money and energy are all factors in a program’s success, she said.

As schools move forward with farm to school programming, TLT’s Lauren Gjessing, who moderated the panel, said it was clear from the group’s discussion that such efforts “take people dedicated to making it happen.”

While the local district doesn’t have a coordinated effort along the lines of Benjamin Logan’s program, or an outside group taking the lead, as in Springfield, Yellow Springs schools have engaged in a variety of individual food-related project-based learning units, Student Services Director First said.

She also noted that the district has a number of students who are vegetarian and vegan, adding that the majority of “our kids and our families are very aware and interested” in nutrition. She said that The Nutrition Group has been a good resource for the district.

The Nutrition Group’s Martin said that the company, which is based in northwestern Pennsylvania, “is big on getting the kids educated” about healthy eating. She said that initiatives like “Wellness Wednesdays” offer the chance to introduce new fruits and vegetables to the school menu.

In the current absence of a local produce-garden program, Martin suggested students start growing herbs that could supplement their meals.

“The more kids touch and see and grow their food, the more they’re going to want to eat that,” she said.

Uncertainty, however, about the restart of school in the fall and COVID-19 related restrictions, particularly around food service, has educators rethinking cafeteria procedures.

The salad bar at the high school, for example, will likely not be usable in its current self-serve setup, Martin said.

And the panelists all agreed that their efforts have lost momentum during the nearly three-month school shutdown this spring. Distancing guidelines and the reallocation of classroom and financial resources also will affect school programs like farm-to-school efforts when classes resume, they said.

In a followup interview this week, First said that while the district awaits instructions from the state, the district is already anticipating some major changes in food service this fall.

“Everybody’s thinking through their procedures,” she said.

“Things are going to have to be pre-packaged for safety, so food won’t need to be handled. Self-serve of fresh fruits and salads won’t be appropriate. We can’t have kids helping themselves; it will have to be dished out by food personnel,” she said. And social distancing of cafeteria staff and students will have to be maintained.

She’s not discouraged, though. First said that putting the meal deliveries in place this spring gave the district insight and practice in some of the safety procedures that will be needed in the fall. She said the county health department has been helpful in establishing guidelines, and she anticipates the department will continue to offer support.