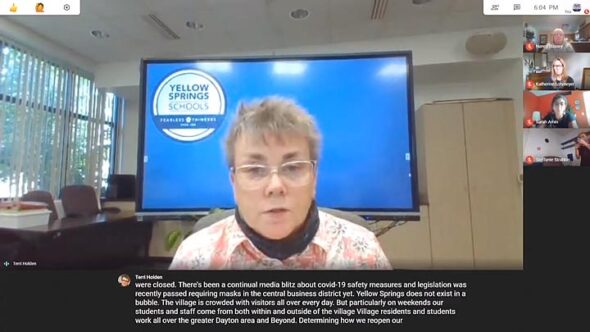 Yellow Springs Schools Superintendent Terri Holden fielded questions from local parents regarding the district’s school start options at a town hall meeting on Monday, July 20. The district could make a decision about school restart as early as Sunday, July 26.

Yellow Springs’ evolving school start plans were the focus of a virtual town hall meeting on Monday evening. Led by Superintendent Terri Holden, the meeting gave parents a chance to ask questions in advance of a deadline this Friday, July 24, by which parents must state their preference for one of two restart options proposed by the district amid COVID-19 concerns.

And ask questions they did.

At least 230 people viewed the meeting, conducted live over YouTube. Questions and comments, typed into a chat function alongside the video feed, came fast and thick. Well over 100 questions poured in during the hour-long meeting, with a number of participants offering more than one question or comment. Most commenters self-identified as parents, though at least one student posed a question, about academic supports.

At the outset of the meeting, Holden acknowledged the emotional charge of the issues being discussed — “emotion and rhetoric are running very high,” she said — and she called for empathy. The tone of the dialogue, conducted by chat, was largely civil. Some commenters pressed for answers, while commenters toward the end of the meeting offered gratitude to district employees.

Parents’ questions ranged from requests for more information about in-school health and safety measures, including mask-wearing, to what would be required of students, and parents, under specific learning options, to supports the schools planned to offer parents who work full-time and are unavailable to supervise the education of their children. Parents also asked questions about how the district would handle sports, extracurricular activities, lunch (if the district returned to some days in-person) and individual education plans, or IEPs, for students with special needs. Parents of open enrollment students sought, and received, reassurance that these students were included in the district’s reopening plans.

The single most pressing concern by far seemed to revolve around how parents who work full-time, including those not physically present during the school day, could realistically and effectively oversee the education of their children under plans that call for some or all of students’ education to take place remotely. Neither option under consideration by the district involves a five-day return to in-person learning. A plan along those lines, announced earlier in the month, was jettisoned as COVID-19 cases began to spike in Ohio.

A commenter identified as “Village Greenery” wrote, “What supports would exist for parents who work full time and cannot take off work?”

Multiple other commenters asked versions of the same question, as well as voicing concerns and offering suggestions. For instance, commenter and local parent Kineta Sanford proposed that the school provide child care on a limited basis. She wrote, “If we go 100% virtual, would it be possible to have an option for some parents who need child care to have their student go to the school for a few days a week?”

Another commenter, identified as “Laura S,” voiced multiple questions and concerns on the topic, including the following observation: “We can’t go 100% virtual without address[ing] how young students will learn when they’re in daycare because their parent(s) have to be at work. At least in a hybrid model, the child is in school 2 days.”

In response to these and similar comments, Holden agreed that such concerns were tough challenges faced by the district in coming up with a workable plan.

“That’s one of the challenges, isn’t it?” Holden said. She went on to suggest that the district would be “willing to engage in collaboration” with parents and other community members regarding school-provided child care or other potential supports for working families.

But she cautioned that the district’s capacity was limited, and nothing has been decided regarding such supports.

“I understand the strain,” she said later in the meeting.

As it stands now, parents are being asked to choose between two school start options.

Under one option, all students would do 100% remote/online education taught by Yellow Springs Schools teachers. A second option would give parents a choice between a hybrid pathway that incorporates in-person and online learning with Yellow Springs Schools teachers and a 100% online pathway that utilizes curriculum from a third-party provider. Using the third-party provider curriculum is necessary under this option given the difficulty for educators of simultaneously teaching online and in-person models, the district has previously said.

Yellow Springs Schools are scheduled to start the 2020–21 academic year on Thursday, Aug. 27, one week later than originally scheduled to allow teachers and others in the district more time to prepare.

Parents’ input will shape but not wholly determine Superintendent Holden’s decision, she said during Monday’s town hall. Holden noted that the school start decision was “tremendously difficult” and required balancing multiple factors, including the health and safety of students, teachers, staff and the wider community; academic goals and students’ mental health; and the economic realities of families struggling to work and provide academic supervision and child care for students at home.

No clear consensus emerged from parents’ comments about a preference for wholly online versus hybrid learning, although stated concerns about child care and parental supervision seemed more acute regarding the 100% online option.

District teachers, however, have staked out a clear position.

In a letter to the superintendent and school board last week, the local teachers union stated its preference for a 100% virtual learning approach to the start of the 2020–21 school year, citing health and safety concerns.

“The Yellow Springs Education Association (YSEA) stands united in the belief that a 100% virtual option for our community is the only solution to begin the school year. The variables and risks that present themselves in our current climate indicate that it is not the time to return to in-person education experiences with our students,” the letter reads in part.

The local staff union mirrors that position, Holden said in response to a question.

“Safety is the number one thing,” Amin said on Monday, emphasizing that teachers want to be back in the classroom with students “but not at the expense of people’s lives.”

Nancy Bussey, a Mills Lawn School administrative assistant and president of the local chapter of the staff union, also took part in the town hall. While she didn’t address the question of online versus hybrid learning, she stated that staff employees are brainstorming ways to shift and reconfigure their roles under either school start scenario.

In response to questions about staffing changes under the school start options, Holden said the district is currently engaged in discussions about job shifts. While she stated her belief that the district “can shift folks’ responsibilities to support remote learning,” she also offered a caution about preserving jobs.

“I can’t say at this point” what will happen with some positions in the schools, she said.

Threaded through parents’ comments were concerns about what learning would look like in wholly or mostly online formats; whether the district had improved its curriculum and approach from what one parent called “crisis schooling” this spring; what was reasonable, and healthy, to expect from children regarding online education; and whether the district had considered innovations such as outdoor classrooms and separate approaches for younger and older children.

While there were few concrete answers provided on any of these topics, several new pieces of information emerged.

Regarding learning formats, it seems likely that learning for most students will involve some combination of “synchronous” and “asynchronous” education. This means that some instruction will happen live through Zoom or other online platforms, while students will also be expected to complete projects and activities on their own time, individually or in combination with groups of peers.

The exception for this would be the option that allows for a choice of hybrid or 100% online, in which case the children of families choosing 100% online would receive pre-recorded instruction from a third-party provider.

Holden stated her preference for Yellow Springs Schools teachers to broadcast their instruction from their classrooms rather than from their homes. The teachers at the meeting did not weigh in on the topic.

Regarding experiences with online learning this spring, Holden acknowledged parents’ widespread dissatisfaction with the district’s choice of an inquiry-based curriculum called InquirEd. She said she had heard from parents that the curriculum, which encouraged students to explore general themes each week, lacked rigor, fell short on providing adequate learning time and didn’t offer enough of a schedule.

The fall’s learning would “look more like real school,” she promised.

Holden said teachers have received training in online learning over the past four months, and were developing curricular approaches to address students’ academic, emotional and social needs.

Lohmeyer and Amin affirmed local teachers’ readiness to develop what Lohmeyer called “creative solutions” in collaboration with students to meet the challenges posed by online learning.

“We have a learning curve, too,” she acknowledged.

Regarding lessons learned from the spring, Amin cited the need to stay connected with students, engage in one-on-one learning and create more structure as among the key take-aways for local teachers.

Holden ended the meeting a little after the scheduled hour, with some questions still unanswered. She promised responses in writing to those and other outstanding questions.

The district is maintaining an FAQ on its website, wws.ysschools.org, to which unanswered questions from, and prior to, last night’s meeting will be posted, according to district secretary Steffanie Stratton this week. A recording of Monday’s town hall is also available through the school’s website.