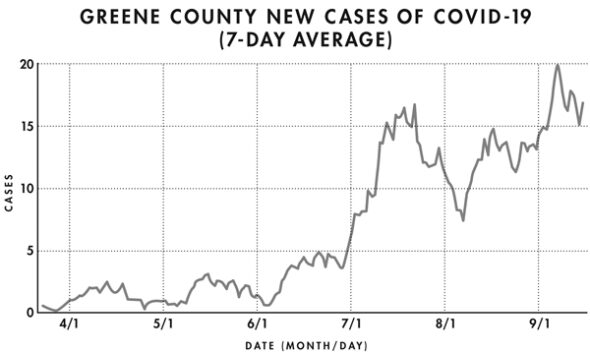 Cases of COVID-19 in Greene County are “surging,” according to the Greene County Health Department last week. Cases were low in the county until July, when they first spiked. Cases have been on an upward trajectory since Aug. 7, when the county recorded a seven-day average of 7.4 cases per day; on Sept. 15, the seven-day average for new cases was 17 per day. Nursing homes and college campuses are driving the recent increase, county health officials believe. (Chart Data: Greene County Health Department)

Clusters of cases of COVID-19 at area nursing homes and among college students are behind a recent surge of cases in the county, according to a press release from Greene County Public Health on Monday, Sept. 14.

Forty-one residents and 19 employees have tested positive for the virus at two nursing and rehabilitation facilities in Xenia and two others in Beavercreek in recent weeks, the press release reported. County health officials became aware of the cases beginning on Aug. 25.

The affected facilities include the Harmony Center for Rehabilitation and Healing in Xenia, Xenia Health and Rehab and Heartland of Beavercreek.

No cases have been reported at Friends Care Community in Yellow Springs, according to its director, Mike Montgomery, on Tuesday. The local nursing and assisted living facility has done four mass tests of all employees in recent months, with all 344 tests coming back negative. All residents who have been tested after developing potential symptoms or possibly becoming exposed were also found negative for COVID-19.

Another factor contributing to higher than average case counts were area college students, according to the county health department this week. That tally includes students who attend a college out of the county and are self-isolating at home with COVID-19, as well as students who have fallen ill at a university in the county.

No cases have been reported at Antioch College, according to spokesperson Christine Reedy on Tuesday. All students were required to submit a negative COVID-19 test result before arriving on campus.

College students congregating on and off campus is leading to a rise in cases statewide. Ohio Gov. Mike DeWine pointed out at a briefing last week that 34% of all COVID-19 cases in Ohio recorded in September are among those ages 0–29, up from 22% in that age group in August.

The University of Dayton, for instance, has recorded 1,215 COVID-19 cases among students since Aug. 10, which is around 10% of its enrollment. At Wittenberg University in Springfield, active student cases initially rose from just two to 22 in a week, according to its president last week. On Sept. 15, they were at 89 active cases. What’s more, Clark County public health contact tracers found each student confirmed with COVID reported 10 to 15 close contacts, while two to three is more typical in contract tracing investigations. That indicates how quickly the virus could spread among college -students.

There are currently three active cases of COVID-19 in the village, according to YS Police Chief Brian Carlson on Monday, the most the village has seen at one time since the start of the pandemic. The total cumulative cases in the village is unknown but is around 15, according to data compiled by the News. The county health department has declined to release case numbers by community, citing privacy considerations.

According to the press release, there are currently 25 people countywide are ill and 15 are in the hospital, with 289 ongoing investigations to monitor the symptoms of those confirmed to have COVID-19 and self-isolating at home.

The News has documented a marked rise in county cases since early July. After moderating somewhat in late July and early August, cases took off again through August and into the first two weeks of -September.

Since the start of the pandemic, the county has tallied 1,224 cases, with half of all cases recorded since Aug. 1. From Aug. 7 to Sept. 7, the seven-day average for new cases in the county nearly tripled from 7.4 per day to 20 per day. By Sept. 15, they had fallen somewhat to 17 per day.

Another possibly worrying sign is that Greene County’s positivity rate was 7.4% for the week of Aug. 27 to Sept. 2. A positivity rate of more than 5% indicates that testing may not be sufficient to find, and thus isolate, cases. However, according to county epidemiologist Dr. Don Brannen later in the week, a high positivity rate may necessarily indicate high rates of community spread. Instead, targeted testing of nursing homes residents and college students could be inflating the positivity rate.

“Our positivity is only for a defined cohort — not the entire population,” Brannen said. “If you tested everybody all at once, then you could have a positive rate for the entire county.”

As of Sept. 8, Greene County had the 16th highest COVID-19 case occurrence out of Ohio’s 88 counties, looking at new cases per capita over the prior two weeks. In total cases, the county ranks 26th and is the 18th most populous county.

County residents are advised to avoid large gatherings, wash their hands, remain a six-feet social distance from others and wear a mask when indoors or when unable to stay six feet from others. Ohio currently encourages residents of the state to avoid traveling to Alabama, Kansas, North Dakota and South Dakota because of high numbers of positive test results in those states.