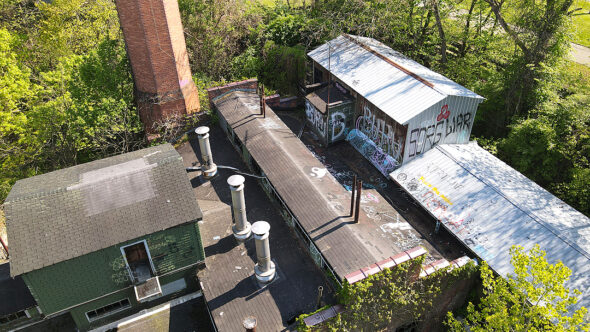 An aerial view of the abandoned Antioch College power plant, which was built in 1929 and operational until 2007. (Photo by Bryan Cady)

When the Glen Helen Association purchased the 1,125-acre Glen Helen Nature Preserve in 2020 from Antioch College, as part of the deal the association assumed responsibility for a shuttered power plant owned by the college. The plant, constructed in 1929, is located across the street from the campus on the edge of the Glen. It is now a hazardous site that includes a large oil tank full of unused diesel fuel, coal ash residue and friable asbestos — all of which pose a serious threat to the natural resources of the Glen and to village groundwater, according to Glen Helen Association Director Nick Boutis in a recent interview.

That runoff takes any friable asbestos or coal ash leaking from old ducts in the site’s buildings. The remnants get swept away by rain, into the wetland area and then down into the creek, Boutis explained to this reporter on a recent tour of the site.

Another deteriorating energy production building just down from the original power plant is an additional source of concern for the Glen. It was built somewhere in the 1960s or ’70s, and rests less than 20 feet from a particularly sensitive area of the preserve.

Walking around the rear of the site, Boutis observed the shiny reflection of broken glass against the sun resting on the ground. “You can see where the runoff has taken broken glass from the site into the preserve,” he said.

To offset a potential ecological emergency, the Glen plans to demolish the plant, clean it up and restore the area into a safe and healthy wetland that can be enjoyed by plants, critters and humans, Boutis said. The Glen’s cleanup efforts received a boost from the Village on May 17 when Council members voted unanimously to provide a $125,000 grant match. The match will help the Glen leverage funds through a grant application to Clean Ohio, a conservation fund of the Ohio Public Works Commission, from which it is seeking $375,000. The estimated cost of the demolition, cleanup and site restoration is $500,000.

Reflecting on the environmental consequences of building structures like power plants near important ecological sites, Boutis offered this insight: “To the extent that there is a place for this type of building in society in general, I think it’s just important that you isolate it from those things that you are trying to protect. And that wasn’t done, so it’s on us to clean it up.”

This article takes a closer look at plans to demolish the building and restore the area, the plant’s history and the current state of the former power plant. 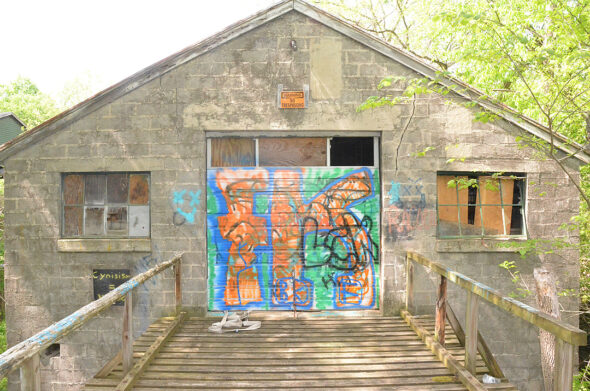 An abandoned building, part of the now-shuttered power plant site that used to be owned by Antioch College, was built within a few feet from an area that is considered ecologically sensitive by the Glen. (Photo by Cheryl Durgans)

Once the funds are secured to start the demolition, cleanup and site restoration, the Glen will contract with a demolition and specialized salvage firm. The entire site is slated to be dismantled.

“If parts of the foundation go really deep, they will stay, but anything within the first foot will go. Then it’s graded and topped with soil,” Boutis said.

Despite the current ecological threat, Boutis believes that the location has a bright and promising future once the hazards are mitigated and the land is restored to good health.

“The Glen does not have much open water, and we see this as a real opportunity for us to incorporate a wetland environment as part of the ecological attributes of the preserve,” he said. “You can see turtles in here, and you can see some cattails down there, but it’s not a very healthy wetland right now.”

What would it take to make it a healthier wetland? At present, the man-made hole drilled in the rock keeps the water level low in the wetland. For now, the plan is to keep water levels low, but widen the wet area. The Glen has plans to plant wetland species, which additionally will help filter the water flowing through it. The work to restore a healthy wetland will be ongoing, but it is a project that the staff members at the Glen look forward to working on.

“The fun of it is watching as the water becomes healthier, and the plant community becomes healthier. We’ll be able to see the evidence of that by the diversity of plants and wildlife that utilize it,”  Boutis said.

The restoration of the wetlands will mean greater accessibility for the mobility challenged in a location that is easier for people to access from the parking lot. Another benefit is having access to a wetland for educational purposes. Right now, it isn’t possible to take students to the site because of the environmental hazards. But that can change with site restoration.

According to Boutis, a restored wetland creates a “ripe opportunity” for teaching visitors about wetland ecology.

“It’s right by our main visitor access point for creating good and accessible educational opportunity where there was once blighted, dilapidated, dangerous buildings,” he said.

When the college acquired the Glen from Hugh Taylor Birch in 1929, there was one precondition — to build a power plant there, according to a letter from Boutis to Village Council. And, throughout the years, the plant was maintained by Antioch, outside of the scope of the Glen staff to do anything with it despite its proximity to the plant.

The power plant was built within a former quarry site, a local limekiln industry off Corry Street, part of which is now the Glen’s main parking lot. Operational in the late 19th to early 20th centuries, the quarry was along the railroad line that ran through the village. After closing,  structures from the quarry were dismantled, and in the 1950s Antioch students used the rock to help build the Trailside Museum, Inman terrace and the steps down into the Glen, Boutis shared.

The power plant was conceived and built in 1929 during the presidency of Antioch College president Arthur Morgan as part of an infrastructure expansion involving the construction of a science building funded by then Vice President of General Motors Charles F. Kettering. The new science building required a large outbuilding to house the furnace needed to heat the structure that would be the largest building on campus at that time. Morgan realized that centralizing the entire college heating and electricity over a single power grid would be the best path forward for the institution. Plans then expanded to include powering the entire village. The Antioch power plant provided coal-powered energy until the college transitioned to natural gas in the mid 1990s, according to Antioch College Archivist Scott Sanders. The plant continued to heat the campus until 2007.

The power plant was constructed at a time when harmful industrial decisions such as building power plants near nature preserves, waterways and residential neighborhoods had yet to be discredited as dangerous practices. According to Boutis, these are not acceptable practices today.

“From where I sit now, that was a decision that you wouldn’t make today knowing what you know about hydrology and air quality and the kinds of things that you use,” he said.

The power plant is a remnant of industrial management policies that pushed dilution as the solution to pollution, Boutis explained. The belief was it didn’t matter how much pollution was produced “if it’s getting diluted over the entire atmosphere. Or a whole river or aquifer,” he said.

And these practices have “mostly come back to bite us,” Boutis added.

However, despite the urgent need to address the hazardous conditions of the power plant less than a year into becoming a privately owned and operated nature preserve, Boutis is quick to acknowledge previous Glen Helen directors for their work in preserving the Glen in such proximity to the plant for all these years. Boutis also cites “the lineage of those who took those first steps 90 years ago,” that helped the organization get to a pivotal moment that he feels will bring success.

“Standing on the shoulders of the people who toiled in the trenches before us, we will see how it plays out. We have this moment of new beginning now,” he said.

Along with the work accomplished by his predecessors, Boutis also credits the Tecumseh Land Trust for helping the Glen establish permanent conservation easements that ensure further land protection and bolster efforts to dismantle the power plant as a course of policy. 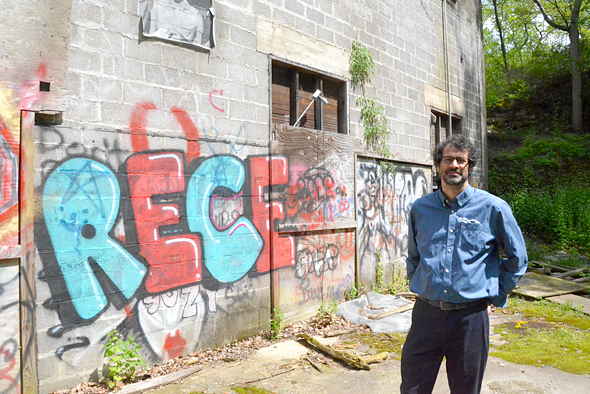 Over the years, the power plant has become a kind of underground destination spot. The abandoned site has offered creative inspiration for music videos, album covers and graffiti artists. Abandoned industrial era spaces have become subject matter for photographers captivated by the residue of the past, and the plant has received its share of attention. However, Boutis pointedly asks that the public stay away from the location. Afterall, he says, the Glen is “first and foremost a nature preserve, and a place of environmental learning.”

“We value and appreciate art, but for the health of the preserve, for the safety of the people that visit the preserve, it is an important step to remove this dangerous structure from the face of the planet,” he said.

“And to the folks who seek this place out as a canvas, I’d say I understand the desire but please don’t, you’re putting yourself in harm’s way doing so,” he added.

Boutis is also aware of the impact that social media has in drawing people to the site. Posts on Facebook and Instagram have attracted people outside of the community to explore the structure. Boutis calls it “vandal tourism.” He is concerned about people endangering themselves by climbing on structures not designed or maintained for that purpose.

The demolition and restoration of the former power plant is one of the many steps that the Glen will take in the coming months to ensure a future for the preserve. The effort is under the umbrella of the Glen Helen Association’s $3.5 million capital campaign initiated shortly after the purchase of the nature preserve from Antioch.  They are about halfway to their fundraising goal that will support infrastructure, preservation and educational programming efforts, according to Boutis.

Boutis views the health of the preserve as part of his legacy.

“I feel like that’s the solemn work of land management — to understand that it’s our job to make good decisions now with the idea that we’re succeeded by good people that are hopefully making good decisions, and over time you end up with an area of land that’s ecologically healthy and significant and meaningful to the people,” Boutis said.

Council, in its resolution to support the Glen’s cleanup efforts, acknowledged that “mitigation of this potential environmental hazard, which poses a threat to Village groundwater, is in keeping with Village goals and with the Wellhead Protection plan — which assesses the highest potential risk source of pollution that directly threatens the water supply” in Yellow Springs. The Village’s contribution of $125,000 will come from proceeds raised through the sale of Village-owned renewable energy credits or RECs. The Village receives RECs for purchasing green electricity.