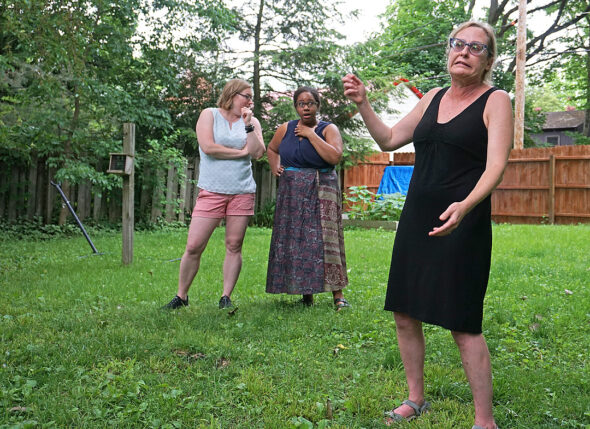 The eighth annual 10-Minute Play Festival is set for this coming Friday and Saturday, June 26 and 27, on the south lawn at Yellow Springs High School. Performances will start a 7 p.m. Above, from left, actors Jeanna GunderKline, Jessica Thomas and Ellen Ballerene — who’s also coordinating the festival — rehearsed for their play in Thomas’ backyard earlier this month. (Photo by Reilly Dixon)

10-Minute Play Festival is back

A child comes out of the closet to her parents. Boutique workers form a union. A businessman breaks convention. An ode to George Floyd.

These provocative scenes and others will take the stage for this year’s 10-Minute Play Festival, produced by the Yellow Springs Theater Company, or YSTC. Performances are slated for Friday and Saturday, June 25 and 26, at 7 p.m. on the south lawn of Yellow Springs High School. The event is free and open to the public, but $10 donations to the company are encouraged.

Now in its eighth year, the 2021 10-Minute Play Festival is keeping to tradition by bringing local talent into the limelight in the form of seven short performances. And as ever, the bulk of the plays were written, produced, directed and will be performed by area residents — most of whom are from Yellow Springs.

However, this year’s festival will be a little different from years past. For the first time, the plays will be held outdoors — attendees are asked to bring their own chairs, blankets and bug spray. This is also the first time the 10-minute plays are being performed in the summer — not to mention in the midst of a slew of YS Pride activities.

But what really sets the 2021 festival apart isn’t so much the location or its season, but the overarching theme that will set the tone for the event.

“All the plays this year deal with matters of social injustices — people who’ve been marginalized by the status quo,” festival coordinator and YSTC chair Ellen Ballerene said in a recent interview.

“The goal this year is to highlight some of the larger inequities going on in the world and to really make people think differently about the experiences of others,” she said.

Ballerene said she and the rest of the YSTC board were inspired by the events of 2020 to add some political heft to their annual festival.

The massive political mobilization that swept the U.S. following the murder of George Floyd and the continuation of the #MeToo movement — both occurring in the midst of the worldwide COVID-19 pandemic that laid bare economic inequities — spurred the board and festival coordinators to rethink their approach to staging the theater event.

“We wanted to do things differently this year,” Ballerene said. “Earlier in the year, when we asked the community for play submissions, we asked that playwrights focus on more serious issues.”

According to her, the seven-play lineup deals with a smattering of these serious issues — racism, classism, homophobia, bigotry and others.

Whereas past play festivals have been lighter in tone, mostly consisting of comedic and occasionally absurd pieces, Ballerene said this year’s festival won’t stray too far from that trend, even though the topics are a little heavier.

“Some of these plays are really funny! But others are also serious.”

When asked if the 10-Minute Play Festival’s quintessential slapstick humor would appear, Ballerene said with a laugh, “Oh, yeah! There’ll still be some of that.”

The prerogative, though, with this year’s set of plays was to bring a broader cast of people onto the stage. Ballerene said she, YSTC board members and festival organizers cast a bigger net when soliciting for festival play submissions and actors earlier this year.

“We were hoping to attract more writers who were people of color, but we did not get those submissions,” she said. “We’re thinking of ways to reach out differently in the future to try to encourage more diversity in our writing pool.”

According to Ballerene, the talent pool has grown considerably this year — both in size and diversity. She said several first-time actors from the Dayton area responded to the call for actors, and now, Ballerene believes, these actors have a good chance of sticking with the YSTC and being in future company productions.

“That’s what we like about the 10-Minute Play Festival: if you’re new to live theater, this format is a great way for you to try it out without the full commitment of a bigger production,” Ballerene said.

Beyond having new talent coming in from outside of the village, Ballerene said that a number of villagers have stepped up into new roles in the festival. Several of the plays featured in this year’s festival are written by first-time playwrights, and several of them are being directed by first-time directors.

Ballerene suspects, though, that audiences will still recognize a lot of familiar faces. One returning actor is Shekinah Williams, who has starred in a number of past YSTC productions, including full-length dramas and past 10-Minute Play Festivals.

In catching up with the News, Williams echoed Ballerene’s views on the importance of the pervading theme of this year’s festival.

“There are some deeper and more intense issues that are going to be addressed in each piece,” said Williams. “One of the plays I’m in addresses workers’ rights in a small town. The other really takes what I think is a realistic look into mental health and socializing with people about those issues.”

Both Ballerene and Williams admitted that discussing some of these issues may be challenging — and as Ballerene put it, “requires a lot of vulnerability on both sides of the stage.”

“For actors, it can be difficult playing the bad guy,” she said. “And more than likely, it’ll be challenging for audiences also. Dealing with some of these topics can be uncomfortable. But it’s important.”

Ultimately, both Ballerene and Williams want their audiences to walk away from the 10-Minute Play Festival feeling thoughtful and conversational.

“In this year’s production in particular, actors and the audience, really, all have the opportunity to imagine what it’d be like to be someone else — a person with a different past than yours, with additional or fewer privileges than you, with different challenges and barriers to overcome,” Ballerene said.

“We take things for granted too often, and if this past year has taught us anything, it’s that we shouldn’t do that.”

The Ten-Minute Play Festival is slated for Friday and Saturday, June 26 and 27, with performances starting at 7 p.m.. The stage will be set on the south lawn of Yellow Springs High School at 420 E. Enon Road. No ticket purchase is necessary, but a $10 donation is encouraged. For more information on the event, or to get involved in future Yellow Springs Theater Company productions, email the company at ystheatercompany@gmail.com.