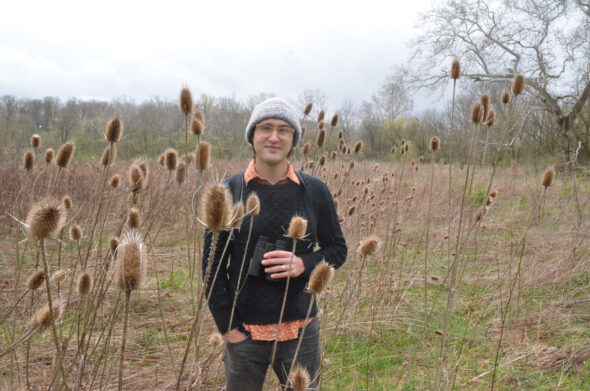 Longtime villager and Antioch alumna, Gabby Loomis-Amrhein, recently published a collection of her poetry titled “evening primroses,” through Recenter Press. “evening primroses” memorializes what it means to move through the Midwest as a queer trans woman. Here, Loomis-Amrhein stands just outside of the South Glen on a brisk April afternoon. (Photo by Reilly Dixon)

I’m no naturalist, but I’m getting better at differentiating Queen Anne’s lace from poison hemlock. I can hear a red-winged blackbird before I see one. And I can typically pick a box elder out of a crowd of maples — I think they’re in the same family of trees. Later this week, I might harvest some of the invasive garlic mustard in my yard to make a nice pesto.

After nearly 30 years of living in Southwestern Ohio, I’ve begun to experience the rhapsodic joy that comes with knowing the names of the nonhuman life that surrounds us — of finally becoming acquainted with my natural neighbors after all these years. What a thrill it is to stand in the South Glen and parse out a confluence of wildflowers into individual organisms, each one idiosyncratic. And yet, just the same, to watch each separate petal recombine with others into larger brushstrokes on a whole canvas coming into bloom.

It’s on a spring afternoon earlier this year when Yellow Springs poet and naturalist Gabby Loomis-Amrhein teaches me these names. I walk alongside her as we trace the banks of the Little Miami. She stops periodically to admire an old sycamore or a grove of skunk cabbage.

Published just last month out of Philadelphia-based Recenter Press, “evening primroses” is a ballad of the Midwest. Its constituent poems — sometimes pastoral, sometimes confessional — root out what it means to move through a changing landscape as a changing self. In doing so, Loomis-Amrhein names something quite particular: the complications and celebrations of trans womanhood in the country.

A Yellow Springs native and 2016 graduate of Antioch College, Loomis-Amrhein, a queer trans woman, currently works as a regenerative land manager at Agraria. 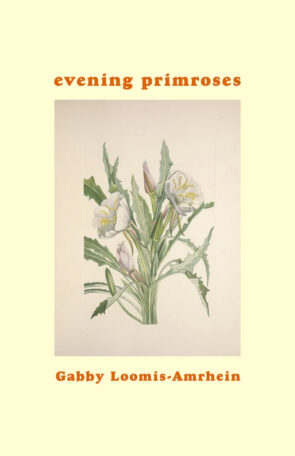 As she told me on our springtime walk through the Glen, she has been assembling the poems that amounted to “evening primroses” over the years since her graduation. All the while, since her Antioch days, Loomis-Amrhein has been outside — she’s been under the Ohio sun, growing in the world, as the imagery of “evening primroses” attests.

Loomis-Amrhein brings her readers down her well-trodden paths through Glen Helen, in the gardens at Agraria, on the country roads, squarely into the thick of the Midwest that she knows so intimately.

And yet, despite the apparent locality of “evening primroses,” readers are occasionally flung into the unknown. Loomis-Amrhein’s poems move across state lines and through the seasons. They take us down into limestone mines and past rows of monocropped corn. Once, we even find ourselves under fluorescent lights in an underwear aisle at Target.

While some of these scenes may feel vaguely familiar to some readers, Loomis-Amrhein nevertheless defamiliarizes them into novel places. A compost pile becomes a site for falling in love. A saltmarsh spurs feelings of gender dysphoria.

In a word, the poetry of “evening primroses” is queer. And Loomis-Amrhein herself readily admits that early on in the book. It’s the “queerness” of the flower itself that provided Loomis-Amrhein with the publication’s namesake.

“Evening primroses are queer, even among flowers,” she explains in the preface of the collection.

“Crepuscular,” which means relating to or occurring during twilight, is, in fact, the title of the first poem in the collection. Loomis-Amrhein begins her ode to life in the liminal with these lines:

“everything is trans at the edge of everything else / growing like grandmother’s morning glories / out of the whiskey barrel, up the rail” writes Loomis-Amrhein.

Here she points toward one of the central motifs that continually crops up throughout the collection: that the kind of vibrant matter that amounts to what we call a lifetime, nature, even love, can all find a way to thrive in unlikely spaces.

She elaborates further on this idea in the preface: “I’d like these poems to complicate the idea that the country is not queer itself, that our presence in it inevitably leads to queer exodus to the city, and that in the edge, the margins, there can be no belonging or home.”

“I write these poems to remind myself, to remind other country queers, the queer spaces in the city, the queer mist on the edge of the queer wood, that despite the margins, we belong in the world,” writes Loomis-Amrhein.

“render me riparian,” a poem that appears midway through the collection, testifies to this sense of belonging. Up to this point, Loomis-Amrhein has moved her reader through poems of late winter, past spring, depositing them here, right into the thick mugginess of high summer in southwest Ohio. It’s “render me riparian” that exemplifies her insistence on belonging within, rather than outside of the world.

here.
my body.
render me riparian,
compress my lungs underwater,
cool my skin and my blood,
run through my hair,
until we float downstream from ourselves,
carving this world into a canyon
safe enough for every bee.

In this poem, as she floats down the Little Miami in a midday meditation, Loomis-Amrhein animates the world around her in unexpected ways. In doing this — that is, “verbing” her nouns  — Loomis-Amrhein presents us with her vision of the world. It’s a place that contains multitudes, with dramas unfolding at every scale. Here, Loomis-Amrhein rejects the privileging of the human experience over the lifeforms that pass by. The speaker of the poem finds herself — whether it’s Loomis-Amrhein or someone/thing else — among a cast of organisms also catching a ride on the river’s current. In contemplating the trees that arch above the river, the “maples / with principally red sounds,” Loomis-Amrhein reminds us how intimately entangled we are in a complex web of things big and small, human and not.

Seasons go by. It’s getting colder. “evening primroses” leaves readers standing on a fresh blanket of December snow in the final poem, “wintermoons.”

two nuthatches cling
and hop downwards
(can you imagine hopping downwards?!)
encircling the trunk of a silver maple
fat slivers of the moon,
dancing down to earth
to flit up and meet again
among the canopy of the whole world

to do it again
thru and thru

Quietly, almost with a whisper, Loomis-Amrhein leaves us there, at the end of her collection of poems, standing in the still of the night, loitering somewhere in between moon beams and snow-drifted tree trunks.

These formless winter scenes — with the glassy whiteness of the snow blurring out detail under its frozen veneer — have the potential to incite our collective imagination. Sunlight transforms into citrus; moonlight is given substance.

Here, the snow calls us to reinvision our relationship to the world; to rethink the dormant vegetation below; to understand that we may appear just as queer to the bobbing nuthatches as they do to us; and to consider how the moonlight extends its gossamer rays into spaces we’ll never know.

And it’s these very spaces that Loomis-Amrhein sees as teeming with expressive possibilities and revolutionary potentials. She assures us that all these earthly stories will endure “thru and thru,” well beyond the margins of the poem and the fringes of ourselves.

“evening primroses” is a publication with a touch of magic. On one hand, it’s a field guide for all the Ohio scenes that I know affectionately and cherish perennially. But on the other hand, Loomis-Amrhein reimagines it all anew. She renders the trees and birds and fungi and flora — whose names I’ll maybe one day know — as things quite queer.

At the end of it all, “evening primroses” reminds us that we are a part of the world, and the world is a part of us.

“evening primroses” can be purchased at Recenter Press’ website at http://www.recenterpress.com for $12.