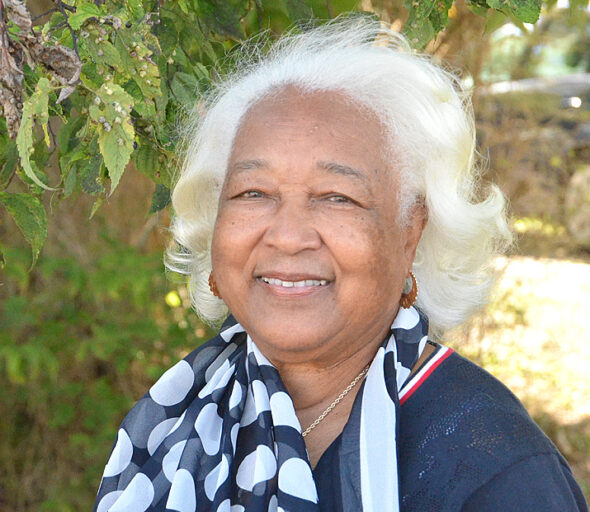 Mary Gail Simpson will be inducted into the Greene County Women’s Hall of Fame on Saturday, Sept. 25. (Photo by Matt Minde)

Yellow Springs women have had a strong presence in the annals of the Greene County Women’s Hall of Fame since its inception in 1981. The Hall of Fame annually honors women who have, according to its website, “made Greene County a better place to live.”

This year, another villager, Mary Gail Simpson, will be inducted into the Hall of Fame, and is being celebrated for both her volunteerism and her long career in social work.

Simpson, who is 83, will be honored at the annual Recognition Day Luncheon at Walnut Grove Country Club in Riverside on Saturday, Sept. 25, beginning at 11:30 a.m. Also being inducted are Cassie Barlow, of Beavercreek; Marlene Labig, of Xenia; Rebecca Morgan, of Beavercreek; and Carolyn Tipps, of Beavercreek.

Simpson was born in Clayton, Ala., and made her way to the Miami Valley via Central State University in Wilberforce as a student. Graduating from the historically Black college in 1964, Simpson received her Bachelor of Arts degree in social welfare, a major which she told the News in a recent interview aligned with her personal interests.

“I’ve always had a liking for helping people,” she said.

While living in Wilberforce, Simpson met her future husband, Bill Simpson, who was an industrial engineering student at Wilberforce University. The two married on Christmas Day in 1965 and settled on Omar Circle in Yellow Springs. Bill Simpson briefly took a job at Vernay Laboratories before transitioning to a long career at General Motors in Dayton. The couple raised two sons, William “Huey” and Alston. Simpson later received her Master of Science degree in counseling education from the University of Dayton in 1978.

Simpson’s own long career began in Montgomery County, where she worked for the county’s Job and Family Services department, before moving to the Greene County Children’s Services Board in Xenia.

“I had many jobs and positions there,” Simpson said, “but my main work was in adoption.”
Simpson said she worked briefly as a caseworker for adoptive and foster families, but that the majority of her professional career was spent as an adoption and foster care supervisor. In that role, she trained and supervised case workers.

“I really had to be up on my own training in order to train and supervise [the case workers],” she said.

Looking back at her work, Simpson said her goal, and the goal of her department, was always to reunite children in foster care and county custody with their families — and when that couldn’t be done, to find them adoptive families. She added that she was proud of how few children were kept in permanent custody of the county during her time at the Children’s Services Board.

“We kept that number down — our judge [Robert Hagler] would always ask, ‘What is the plan for this child?’ — so Greene County was known for providing high-quality care,” she said. “It really disturbs me when agencies have a high number of children in permanent custody that they can’t find homes for.”

Another aspect of Simpson’s career was evaluating and recruiting the potential foster parents themselves, whom she said were critical to her work.

“Foster parents were the backbone of the agency — they would take children any time of the day or night,” she said. “It takes a special kind of person to do that, and I was so fortunate to have a group of really dedicated foster parents.”

Simpson also supported the county outside of her career through volunteer work, mainly through her memberships in the Wilberforce Rho Omega Chapter of the Alpha Kappa Alpha sorority and the women’s community service organization Altrusa International. Through those memberships, she was able to help raise funds for clothing items for Children’s Services and for scholarships.

Simpson retired from her career in 1999, and said she likes to spend her free time playing card games like Bridge and Frustration. A longtime member of First Baptist Church of Yellow Springs, she’s also had a hand in the church’s traditional Annual Tea. All of those pastimes, however, have been put on hold due to the ongoing pandemic.

“With COVID, everything has just changed — I’m about tired of Zoom!” she said.

After retiring, Simpson said she also began donating her time to working in the Glen Helen Nature Shop.

“I love working in nature,” she said.

However, Simpson had to give up that work following a fall that resulted in a traumatic head injury requiring two surgeries. Now she confines her nature work to her own garden, where she grows flowers, herbs and vegetables — when the local deer don’t get to them first.

“I’m in my 80s, so I’m kind of lucky to be able to get out there and do anything, but my neighbors will see me chasing the deer away,” she said. “After two brain surgeries, I’m a walking miracle!”

For more information about the Greene County Women’s Hall of Fame Recognition Day Luncheon, or to make a reservation, contact Hall of Fame Chair Ann Byrd at 937-429-1805.