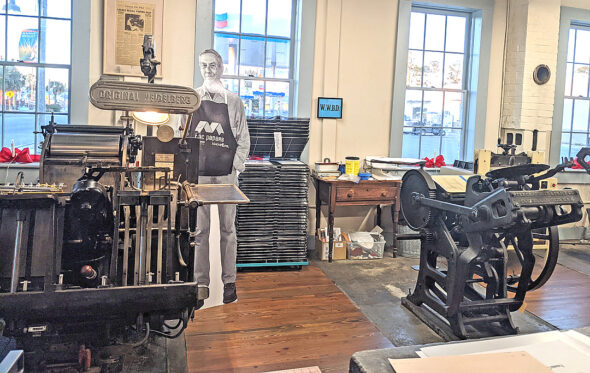 The Panama City Publishing Company Museum. At left is a Heidelberg letterpress — similar to one used at the Yellow Springs News in days of yore — and at right a Chandler and Price letterpress. Between them is a cardboard cutout of Buddy West, lifelong printer and great-great-grandson of George West, founder of Panama City’s first newspapers. (Photo by Lauren “Chuck” Shows)

Editorial | When local news is history

A few months ago, I visited the Panama City Publishing Company Museum in my hometown, Panama City, Fla. Once billed “West Florida’s premier printing plant,” its rectangular brick edifice has squatted on the corner of Beck Avenue and 11th Court for 100 years.

I had never heard of the museum, and didn’t know much about the history of newspaper publishing in the place where I grew up. Between you and me, when I left Florida in young adulthood, newspaper writing was not on my perhaps imprudently lavish agenda.

Nevertheless, stepping into the museum after all my years away from home felt familiar. Along one wall there was a Heidelberg press, a row of letterpress type and plate trays in shelving units and a Linotype machine. Though they were clean and well-lit, I recognized all of these printing elements as siblings of the dusty machines and implements that live in the dim back space of the YS News office.

The Panama City Publishing Company Museum building is small, no bigger than the YS News, though definitely less labyrinthine. The company published Bay County’s first three newspapers: The St. Andrews Bay News, the Lynn Haven Free Press and The Panama City Pilot. All of the papers were founded by George M. West in the early 20th century, and were edited and published by West and his wife, Lillian West.

The Wests were, like many newspaper people, personalities in their time. George West was responsible for much of the development in the early days of Bay County, but he was also a botanist whose editorials were often florid meditations on native flowers. Lillian West owned three-quarters of the publishing business, and only ever wore men’s shoes.

I introduced myself to our museum docent, Lisa, as “something of a newspaper person myself,” and she let me get behind some of the roped-off sections to take a closer look at the displays. There were laminated archives of the three newspapers from the ’20s and ’30s, which look a lot like the News’ own archives of the time: Bible study meetings and local government meetings, new babies, new marriages, retirements.

“Of course, it’s owned by Gannett now,” she said, referencing the multimedia conglomerate that owns USA Today and has acquired a host of community newspapers over the years.

“They fired the last local editor a few years back — I don’t know who the editor is now,” Lisa said.

The News-Herald’s current masthead lists six employees, and these six are tasked with covering all of the news for a county of 175,000 people, with a new issue every day of the week. Though the paper’s staff is no doubt talented and dedicated, there’s no time to cover every county school board meeting when you have to fill so many inches every day, and there are certainly not enough writers to cover the council meetings for every town and neighborhood in the county. With the exception of an occasional feature story, there are no pictures of the newly wed and affianced or speech and debate team winners or well-known local folks retiring from jobs.

A good portion of the daily content News-Herald subscribers read is news from elsewhere in the country — the same stories every Gannett subscriber is reading. Even the editorial content is often not local, written by people subscribers have never heard of and will never meet.

By this point in an editorial, I should be making a point, and I think you’ve probably landed on what it is, or something close to it, anyway.

We’ve got the makings of a good museum here at the Yellow Springs News. We’ve got our press and our linotype and our smelter and our plates and our big collection of archives. We’ve been maintaining the history of this paper — and this village — every week for the last 140-odd years.

When I left the Panama City Publishing Company, I couldn’t help but hear a little trill of divination at the back of my mind: Will the News be only past-tense one day?

If you’re reading this, I’m preaching to the choir. You already think local news is important. You send us your triumphs and your griefs. You read about what’s going on with your neighbors, and you respond to their concerns.

By design, this newspaper will never be absorbed by a media conglomerate. If people stop reading the Yellow Springs News, it will simply disappear — and so will the ongoing record of our community life.

Outside of the obvious implications that possibility would mean for my personal employment, it’s a pretty scary future to contemplate. Even though I never thought much about local newspapers in my youth, I now can’t imagine life without this one.

But I don’t want to end this editorial — the first of the new year — with fear and trepidation.

Gratitude is a better place to start.

Thank you for reading the Yellow Springs News.

One Response to “Editorial | When local news is history”