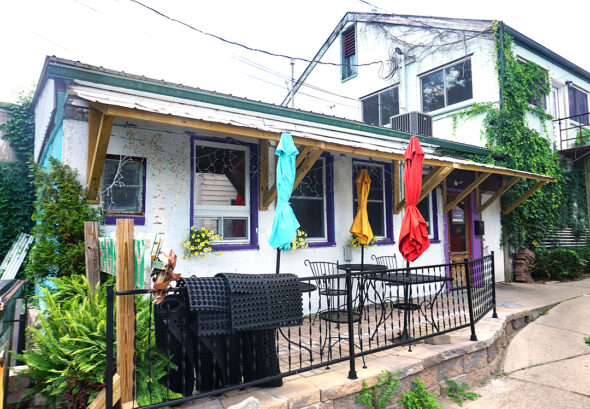 Ownership of the Veganry, which opened its doors in January of this year, is changing hands. Owner Jayne Brahler recently announced villagers Angie Hsu, Matan Mazursky and Kumar Jensen will be taking the helm of the vegan restaurant. (Photo by Reilly Dixon)

“The great news first: the restaurant is changing hands and will continue as a vegan establishment. The good news is that the Black Barn Veganry ice cream will still be available,” Veganry owner Jayne Brahler wrote in a recent email to the News.

While many villagers who enjoyed the Veganry’s menu options may be disappointed by the announcement, Brahler is hoping that the community will embrace the site’s new owners, villagers Angie Hsu, Matan Mazursky and Kumar Jensen.

“I am sure many of you know Angie, Matan and Jensen and will agree — they are a perfect match,” Brahler wrote.

In an email to the News, the new owners expressed excitement for their new venture, which is not yet named.

“We look forward to joining the small business community in Yellow Springs. Clearly, not only do the people want it, but our environment needs it,” they wrote. “We are thrilled for this new opportunity, one that has captured our hearts and minds and imaginations very quickly. We are passionate about the power of food as a vehicle for storytelling and sharing, as exploration of identity and community, and as a force for bringing people together. Jayne has forged a new path for plant-based food in Yellow Springs and in the region, and we are excited to continue that journey.”

Brahler told the News that during the time since she opened the Veganry — one of the few entirely vegan restaurants in the area — people came from all over the region, including Cincinnati and Columbus.

According to Brahler, one of the reasons she decided to sell the restaurant goes against the grain of current restaurant industry economic trends. During a time when many restaurants are struggling to remain open, Brahler had the opposite dilemma — high demand. The Veganry, which opened its doors on Jan. 1, was a labor of love and “immediately took off like wildfire,” Brahler wrote.

Brahler, 69, a former professor who recently retired from the University of Dayton, conceded that, despite her love of running the restaurant, time has caught up with her.

“I will miss that experience. But let’s face it, I’m no spring chicken, and the additional time that was required of me on the days we were not open became too much. So, I decided to focus back on my ice cream and desserts, and have someone else do the food,” she wrote.

Brahler said that before deciding to sell the restaurant to Hsu, Mazursky and Jensen, she received several offers from people outside of Yellow Springs, but turned them down, because it just didn’t feel right.

“Those parties, however, planted the seed in my mind that I could sell if I felt a need, or desire to do so,” she wrote.

Brahler, who continues to have mixed emotions about selling her beloved restaurant, finally determined she needed to do so to preserve her health and to focus on family needs more fully.

“I contacted some friends who are Yellow Springs residents to see if they might be interested in running a vegan restaurant and it was a perfect match,” she wrote.

While the new owners decided not to purchase Brahler’s food menu, her popular vegan ice cream will be offered in the yet-to-be-named new restaurant when it opens. The owners plan to open in early 2023, and will announce a “more precise” opening date at the end of the year.

“We are excited to keep the community updated as we get closer to the restaurant’s launch,” they wrote.

In the meantime, people can still purchase Brahler’s treats. She plans to maintain some limited hours until the new restaurant opens, and people can purchase ice cream through the end of the year. Hours will be announced on the Black Barn Veganry’s Facebook page.

The News will update the community as more details about the restaurant become available.