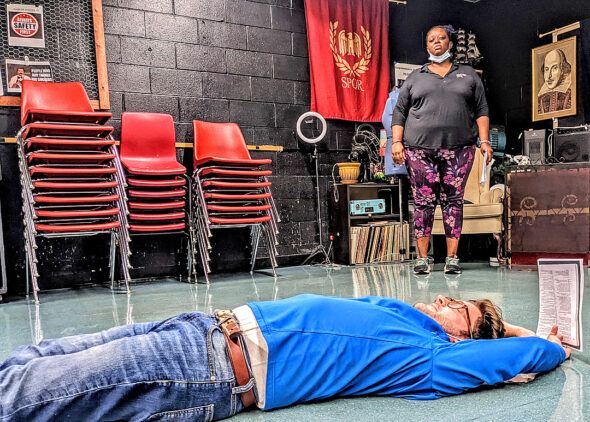 As The Bard looks on, Stephanie Radford and Garrett Young rehearse a scene from Shakespeare’s “Othello” in which the genders of Othello and Desdemona have been changed, allowing for new readings of the text. The scene will be performed as part of the YS Theater Company’s “Pop-Up Shakespeare” event, which will be performed downtown on weekends in August. (Photo by Lauren "Chuck" Shows)

How often, when walking in downtown Yellow Springs, are you surprised by actors playing out scenes in five-century-old verse?

Frequently and soon, if the YS Theater Company has its druthers.

This month, the company will debut its “Pop-Up Shakespeare” performances, which will be mounted outside, in public spaces downtown, on weekends. Scenes and soliloquies, set apart from their larger contexts, will be performed for anyone who happens to be downtown at performance time, though they will be announced on social media shortly beforehand.

YS Theater Company Artistic Director Lorrie Sparrow-Knapp, who is directing the pieces, said the performances are a return to form for the company. Under Sparrow-Knapp’s leadership, the YSTC began its “Summer Shakespeare Shindig” outdoor performances in 2016 with “Much Ado About Nothing.” The debut effort was followed over the next three summers by “Julius Caesar,” “A Midsummer Night’s Dream” and “Othello,” until the pandemic halted the burgeoning annual performances.

“It’s a tradition that we want to keep going,” Sparrow-Knapp said.

“And then … some things happened,” she said with a laugh.

This spring, Sparrow-Knapp was diagnosed with multiple sclerosis, an immune disorder that affects the central nervous system. While she said the diagnosis answered some questions she’d had about her own health for years, it also meant scaling back her plans for returning to The Bard.

“Not to mention we’re still in the throes of a pandemic, right?” she said. “It takes a lot of effort to make art right now — it just does. So I decided to pivot.”

For Sparrow-Knapp, the change in direction meant opening up Shakespeare’s words to anyone in the company who wanted to try them on. Any scene, any soliloquy — it was all fair game.

Sparrow-Knapp would act as director for each actor or group of actors, but the choice of what to perform would be solely up to them. That wealth of choice, she said, was creatively liberating for some company members.

“A core group of people came back with scenes that really spoke to them,” she said. “For some of them, they’re things that they have done before. For some of them, it’s stuff they’ve always wanted to do.”

The line-up of performances includes scenes from “Othello,” “Antony and Cleopatra” and “Macbeth” and soliloquies from “The Tempest,” “Hamlet” and “Henry V.” Sparrow-Knapp said each of the selections is, in some way, personally meaningful to the actors bringing them to life, which she thinks is crucial.

“We have to ask ourselves, ‘What is the relevancy of what we’re doing? And if we’re going to speak to the human condition, why are we using 500-year-old words?’” she said. “What we have are scenes and soliloquies that are incredibly powerful commentaries — not only about what the actors love and what speaks to them, but also about the 21st century.”

Sparrow-Knapp said that, in addition to the freedom to pick anything from Shakespeare’s body of work, actors have also had the freedom to interpret those selections based purely on the words that appear within their confines, unmooring them from the larger contexts in which they’re typically presented. Doing so has allowed the actors to find new dynamics and frames of reference within the text, and to anchor those dynamics to modern issues, presenting a thrilling theatrical challenge.

Actors Stephanie Radford and Garrett Young, both of whom have performed in “Summer Shakespeare Shindig” offerings in the past, have used the opportunity to re-examine a scene from “Othello.” Swapping the genders of the characters written in the scene, Radford becomes Othello, and her spouse, Desdemona, is played by Young.

In the play, Othello has been deceived by the villainous Iago to believe that Desdemona is engaging in an extramarital liaison with Othello’s friend, Cassio. The evidence for this, planted by Iago, is Desdemona’s handkerchief. With this evidence, Othello is driven to murder his beloved.

But Radford said that, when Othello becomes a woman — and when Iago is removed from the context — the story plays differently.

“When we decided to gender-swap, all of the choices Othello made as a woman — I felt less like she was being manipulated, and more like Othello had calculated through everything,” Radford said. “In that sense, Othello isn’t as victimized in my mind.”

Young, who played Iago in the company’s 2019 production of “Othello,” said performing the scene is a way to re-engage with the text, and to get a ground-level view of a character who was only in his periphery before.

“I’m tackling this character after I’ve done the play as its villain,” he said. “It’s very interesting to approach it as someone who’s innocent — kind of.”

To clarify the “kind of,” Radford said the two actors are “treating the handkerchief as fact,” muddying the waters on whether Young’s Desdemona is as innocent as he claims.

Young added: “I’m approaching this as a man who maybe has one thing to hide, but who’s ultimately innocent — and does not deserve to die. I would like to point that out!”

Another challenge for the actors is the “pop-up nature” of the performances: presenting these reimagined scenes outdoors, in unconventional spaces, in front of audiences who may or may not be expecting them. Sparrow-Knapp acknowledged that, in some ways, this prospect is “terrifying,” but that it also brings a new dimension to the work.

“Some of these pieces are confrontational, and some are very heavy-hitting,” she said. “I’m going to be very interested to see how people react — particularly when they have not necessarily planned to go to the theater!”

Each scene and soliloquy will be performed multiple times, and performances will be free, though donations will be welcome.

For those who prefer their theater experiences to be scheduled well in advance, Sparrow-Knapp said the company is also working on securing a space where all of the scenes and soliloquies will be performed together; that collective performance will be announced in the News when a date and location are solidified.

Sparrow-Knapp said she still intends to tackle the grand Shakespeare idea she originally had in mind, aiming to bring it to audiences next year. Being of a — naturally — dramatic inclination, however, she stayed mum on its finer details, preferring to save those for a future story.

But for now, working closely with a smaller group of actors to really dig deeply into Shakespeare has, she said, been one of the most rewarding experiences of her life.

“It’s been a bite-sized rehearsal process, which is about what I could personally handle — and yet the bite has been so delicious,” she said. “I took a step back to figure out my health — but Shakespeare has been the best pharmaceutical.”

Visit facebook.com/ystcohio to get updates on “Pop Up Shakespeare” performances.