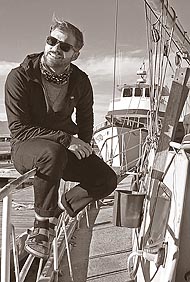 The beloved son of his late father, David, Jonathan is survived by his beloved mother, Denise; sister, Jennifer; daughter, Ava; and stepfather, Stephen.

Jonathan was born in Dallas, Texas. At the age of 6 he moved to Yellow Springs, Ohio, where he spent his school years; he later joined the U.S. Army, and had a family. Jonathan was a fun-loving, hard-working, spirited and capable man. He attended a vocational high school and became a precision machinist. After joining the Army, he served in Iraq during the Gulf War.

From a 2007 letter regarding Jon’s character and competence: “Jonathan took part in Operation Iraqi as an infantry sergeant in the Army. He was a team lead in combat for six continuous months in 2006. In an arduous environment, against an unforgiving enemy he made complicated decisions at the highest level achieving objectives while securing the welfare of his subordinates.

His ability to lead from the front epitomized a leader of soldiers.” —Department of the Army, Alpha Co., 2nd Battalion, 6th Infantry Division.

After leaving the Army with an honorable discharge, he returned home and married his high school sweetheart, Cheryl. Jon and Cheryl had one beautiful daughter, Ava, whom he adored and took on many adventures in both Ohio and California. He worked in the tech startup world and eventually moved west to San Francisco. There he continued his college education, studying engineering, architecture and construction management. In order to help fellow veterans, he volunteered and completed a work study program at the San Francisco Veteran Counseling Center in the Civic Center. Most recently, he was a manager at a Bay Area-based outdoor sporting goods store.

Jon loved to ride his road bike through the country roads of Ohio, the city streets of San Francisco and the hills of Marin County. You’d be likely to find him wearing his Levi’s, riding his Surly, cruising to Bob Dylan. He played the guitar, listened to all types of music, though mostly classic rock and the blues, and attended many concerts. Jon was an avid news reader and stayed well-informed in current affairs, politics and sports.

David Jonathan lived a full and varied life in his short time here. He will be laid to rest at the Yellow Springs-Clifton Union Cemetery in Clifton, Ohio. A portion of his ashes will be spread in a few of his favorite places — Clifton Gorge, the Eel River at Richardson Grove, Fort Point at the Golden Gate Bridge and the Yuba River at Hoyt’s Crossing.