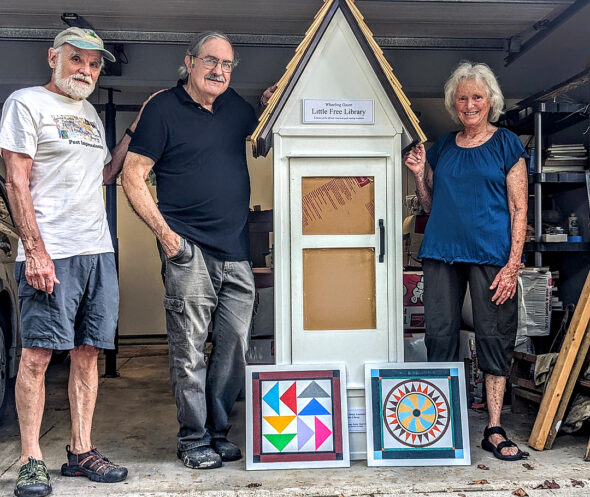 Racial justice, one book at a time

As summer comes to an end and Gaunt Park’s usual warm-weather activities wind down, villagers can look forward to another activity that will be available at the park year-round: reading.

A new Little Free Library is on track to be installed at Gaunt Park this month, and the library will be filled with books themed around social and racial justice. It will be located near the playground at the entrance of the park, and will mainly feature books aimed at children and teens, with some books for adults.

YS Community Library Youth Librarian Nacim Sajabi, who initiated the idea of the library, told the News last week that she could think of no better place to host the new library than Gaunt Park.

“Wheeling Gaunt was able to buy freedom [from enslavement] for himself and his family and then donated the land [for the park] — what an incredible example,” she said.

According to Sajabi, the new compact library has been about a year in the making, with the idea first presented to area youth at last year’s annual Young People of Color pool party at Gaunt Park.

Kids were asked to vote on ideas for designs. One of the ideas with the most votes — a structure surrounded by pieces of art — was presented to local designer and artist Keith Kresge. He went on to conceive of the tall, white cabinet structure, secured on a pole and topped with wooden shingles, and flanked on each side by 12 paintings of quilt squares.

“Because most of the Little Free Libraries [in the village] are smaller, I wanted this one to kind of grow out of the ground,” Kresge said of the design. “And then we’ll have basically these totems with the quilt symbols on each side, and visible from both sides of the library.”

The colorful wooden quilt patterns were painted by Kresge and his wife, Elaine Kresge, and by local McKinney Middle School students and youth involved in the Village Impact Project.

The significance of the quilt squares rests on widely reported historical lore that quilts were hung along the Underground Railroad with hidden symbols stitched into them as messages meant for Black Americans escaping enslavement. One pattern might mean to follow the North Star; another to leave the road and follow animal trails through the woods; another to follow the paths of geese.

But Sajabi said that the historical veracity of the use of quilt squares as methods of communication has come into question in recent years. According to the Smithsonian’s Folklife Magazine, the theory of quilt squares as messages was first introduced to American readers by the 1999 book “Hidden In Plain View: A Secret Story of Quilts and the Underground Railroad” by writer Jacqueline Tobin and quilter Raymond Dobard. 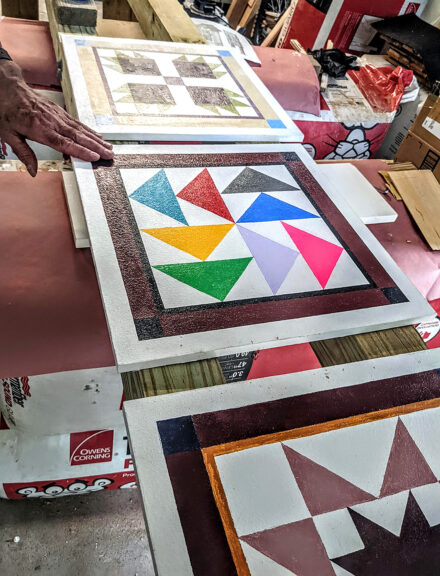 The new Little Free Library, on track to be installed at Gaunt Park this month, will feature wooden squares with quilt patterns. (Photo by Lauren “Chuck” Shows)

In the ensuing years, some historians have disputed the claims made in the book, citing evidence that some of the designs didn’t yet exist when they are purported to have been used as symbols.

Historians have also noted that such uses of quilts were not mentioned in any of the 2,000 interviews of formerly enslaved Americans conducted by the Works Progress Administration in the 1930s.

For her part, Sajabi said she was alerted to the ongoing historical debate after running the idea for the library art by Dr. Carolyn Mazloomi, a quiltmaker, author and founder of the Women of Color Quilters Network, who spoke at the library earlier this year.

“When you dig a little deeper, you see it’s not so concrete,” Sajabi said. “But we do know that the quilting tradition is important in African American history, so we’re still using the quilt squares as art pieces.”

The construction of the little library itself was completed by local carpenter David Mader, who is Sajabi’s stepfather. He said the library’s door will hold a pane of high-quality plexiglass, so that visitors at Gaunt Park can see what books are on offer from the outside. He chose utility-grade eastern white cedar, he said, to build the structure’s rustic, unpainted wooden-shingled roof — a common feature for 18th- and 19th-century American homes, after which the library was, in part, modeled.

“Cedar was used for shakes [a type of hand-hewn, wooden shingle], and we used the same idea, but ours are much thicker,” Mader said. “And over time, [the shingles] should age into a silver color — that’s one of the qualities of cedar.”

He added that villager Todd Van Lehn will be digging holes and pouring the concrete to anchor the library and the art pieces this week, and that they are set to be installed soon after.

Mader said the money for the materials needed to build the Little Free Library — about $750 — was provided by the YS Library Association. All of the time and labor to bring the project to fruition was donated by Mader and Keith and Elaine Kresge.

“We’re all [part of the Bahá’í Faith], and to be a servant is the highest calling,” he said. “So for the three of us, the idea of service is a spiritual endeavor — and [Sajabi] is my kid, and I love what she’s doing at the library.”

What Sajabi is doing extends beyond the Little Free Library; this project is the product of two years’ worth of programming centered around issues of racial and social justice that began, she said, when George Floyd, a Black man, was killed by police in May of 2020.

“I’m married to a Black man and I have biracial kids — it hit so close to home and it was so, so tangible,” Sajabi said. “I remember coming to work and saying, ‘We have to do something — we’re here to serve the community.’”

Thus began the Racial Justice Book Club, a series of reading and discussion group meetings for teens and adults. After its first meeting via Zoom, which Sajabi said was well-attended, she kept planning more meetings to keep up with demand. Since the book club’s inception in the summer of 2020, attendees have read and discussed such books as Nic Stone’s “Dear Martin,” “Caste” by Isabel Wilkerson, “This Book is Anti-Racist” by Tiffany Jewell and Aurelia Durand and Ta-Nehisi Coates’ “Between the World and Me,” among others.

Sajabi has also planned programming like the screening of biopic “Just Mercy,” which follows the founding of the Equal Justice Initiative by civil rights attorney Bryan Stevenson; the Asian American and Pacific Islander Month panel discussions in 2021 and 2022; the placing of books by Black authors in Little Free Libraries around the village; and collaborating with Xenia Library’s SparkPlace to create a banner featuring photos of local teens participating in the local Black Lives Matter marches and rallies, taken by villager and photographer Kathleen Galarza, which was hung in the library’s teen section.

Sajabi said that, though she initially felt emboldened by the civic responsibility of her position at the library, she also had some misgivings about implementing library programming based around antiracism.

Sajabi said she did get a little criticism — but not the kind she expected — when a colleague told her that “nobody would come” to any of the programs she had slated. This pushback, though, solidified her resolve to shore up the library as a bastion of knowledge for anyone who wanted to learn about antiracism efforts.

“I’m really glad I didn’t listen to that, and mostly I was really supported,” she said.

That support came, she said, from a lot of places, including educators like Eli Hurwitz and John Gudgel, and from The 365 Project, which offered to donate to the new Little Free Library copies of “Blacks in Yellow Springs: An Encyclopedia,” “Legacy of Grace: Musings on the Life and Times of Wheeling Gaunt” by Brenda Hubbard and “Wheeling Gaunt’s ABC’s” by Mikasa Simms’ 2017–18 first-grade class at Mills Lawn.

Sajabi meditated on the fact that the United States — and Ohio in particular — are at a crossroads when it comes to educating its children about antiracism and social justice for other marginalized populations.

She cited Ohio’s House Bill 616 — popularly known as the “Don’t Say Gay” bill — which, if passed, will not allow public elementary school educators to discuss sexual orientation or gender identity; and House Bills 322 and 327, both of which would limit what teachers can say about racism. In the same vein, according to recent reports in The New York Times, USA Today and The Washington Post, access to books that cover these topics is increasingly tightly monitored in school libraries around the country. Public libraries, Sajabi said, may be the last stronghold of knowledge for students who are denied access to education on these topics.

“Every year, I always have a list for [young readers] of the banned books, and we’ve had discussion groups based on banned books,” she said.

And as long as public libraries are still supported by their communities, Sajabi said, the librarians there will remain, “to help guide you to find information, not tell you what you shouldn’t read.”