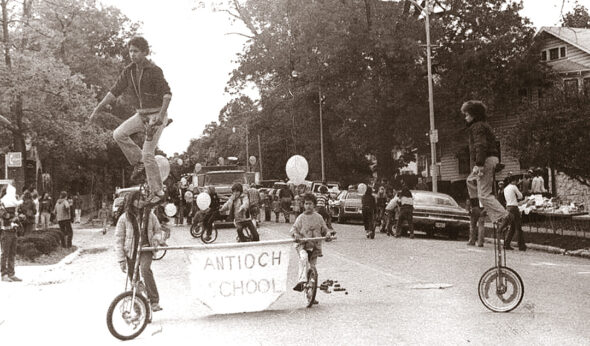 Antioch School students ride unicycles in a parade in the 1970s. Unicycles are now quintessentially associated with the school, whose logo features a unicycle-riding bear. (Submitted photo)

Last year, The Antioch School — oft-billed as the nation’s “oldest democratic school” — turned 100 years old. As the News reported earlier this year, celebrations for that milestone birthday were put off due to the pandemic. This month, however, the 101-year-old school is pulling out the stops to celebrate with its most ardent supporters: its alumni.

The school is hosting a three-day celebratory reunion from Thursday, Oct. 20 through Saturday, Oct. 22, which will include music, workshops, art projects, skits, the long-loved Harvest Supper Potluck — and plenty of memories.

In the service of reminiscing, the News caught up with four Antioch School alumni in the lead-up to the reunion. All of them were students in the first half of the school’s life — in the days before modern-memory associations like election day Soup and Souls dinners, the ubiquitous unicycles and, in some cases, even the school’s current Corry Street building.

The Antioch School was founded in 1921 by then-Antioch College President Arthur Morgan as an institution that aimed to “emphasize the joy of living” for its students, according to a 1924 brochure.

Originally located in the former mansion of locally renowned Yellow Springs founder William Mills — on the lot where Mills Lawn Elementary School now stands — the first incarnation of the Antioch School hosted students from first through 12th grade. Within a decade, the school shifted its focus to first- through sixth-grade students.

The Antioch School’s educational philosophy at the time was similar to what it is now, allowing freedom for students to chart their own learning journeys, according to Martha Heller, who began attending the school as a first-grader in the mid-1930s and continued through sixth grade.

“The school was extremely casual,” she told the News. “We had meetings in the morning, and then we did what we wanted to — I remember reading on the teeter-totter for days on end.”

Heller said the school didn’t give its students grades or homework, but that learning about the ins and outs of American government was an important part of their instruction — particularly for teacher Ernest Morgan, who would go on to be the editor of the YS News and run for both state senate and government as a socialist.

“We studied civics a great deal — that was very important at that time,” she said. “[Morgan] wanted to teach us about what was going on in the world.”

Accordingly, Heller added, her class spent a whole year studying war — both in play, where students would pretend to fight and work for the Red Cross, and in deeper reflection.

“I wondered why adults were so silly to have wars, and we had a long discussion about that,” she said. 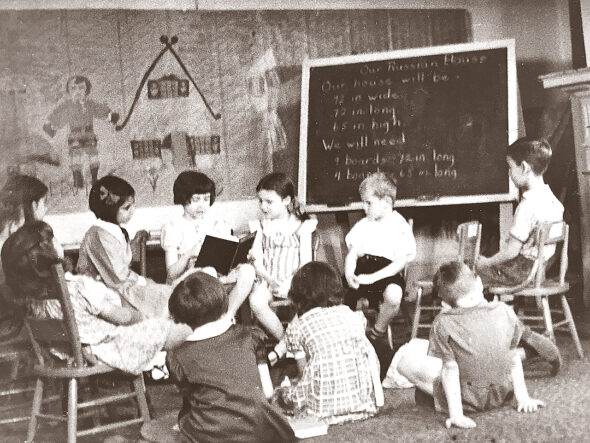 Students read to one another in the 1940s in the former Mills mansion — the first home of the Antioch School. (Submitted photo)

Jessica Andrews, who began her Antioch School education in 1948, said she and her classmates, too, studied politics and held mock elections — but that it was the school’s emphasis on allowing students to forge their own creative paths that stands out for her more than 70 years later. She pointed to annual plays that students would choose and produce together, and to the production of The Antioch Bugle, a newsletter written and published by students.

“[Students would] write a poem or a little story or something — and if you look back on them, they’re just wonderful,” she said. “Because you know, we didn’t know what we were doing, but we had the freedom to try.”

Andrews, who is on the steering committee for the upcoming reunion, noted that part of the festivities will include readings from The Antioch Bugle.

Barrie Grenell, who came to the school shortly before it relocated to its current Corry Street building in 1952, remembered a love for the Antioch College students who would come to the Antioch School, both to teach the students there and to learn about the process of teaching themselves.

“They were younger and they did fun things with us, singing and teaching us how to dance,” she said.

Having moved to Yellow Springs halfway through the school year, she narrowly missed out, she added, on having a young Coretta Scott, later Coretta Scott King, as a student-teacher. She remembered, however, that fellow student Robin Lithgow had been taught about simple song structure by Scott, and had gone on to pen a song of her own.

“[My classmates and I] all know that song to this day: ‘My little boat is sailing on the old blue sea/Whenever it bumps it really bumps high/and it always bumps me,’” she said.

Tucker Viemeister, who attended the school from the mid-’50s through 1960, said that the liberty to decide what worked for him as a student — an approach still reflected in the school’s self-descriptor, “democratic” — meant learning things he would most likely not have learned in a traditional school environment. He reflected on a student-chosen project, building a totem pole.

“First, we needed to make chisels and stuff — but to do that, we needed to have a blacksmith forge. And if we wanted to build a forge, we had to cast the foundation,” Viemeister said. “Next thing, we’re driving out into the country [with teacher Louis King] to get gravel to make the cement. We didn’t actually get all the way to making the totem pole — but we did make a forge.”

He added that this “experimental” approach to education meant that trying new things — and even failing — never felt like a wrong turn.

“If you think you’re in an experiment, that changes your attitude about … what the outcome is supposed to be — it feels like things are more flexible,” he said. “And if you don’t like this experiment, the next one might be better.”

Viemeister said this kind of process — figuring out what’s needed for a project, changing the process along the way as new information is gathered — is pretty similar to his own working process now as an adult. A longtime and award-winning industrial designer and founder of Viemeister Industries in New York, he said he has long noticed a connection between progressive education and the design process.

“It’s the same thing, basically project-based learning — learning by doing, in other words,” he said. “You don’t just read a book about how to do something, you immerse yourself in it.”

Grenell, who now lives in San Francisco, California, and who went on to have a long career in nonprofits, said she also felt emboldened by the Antioch School’s “jump in and try” approach, and that it led her to feel more capable than she might have in later years.

She described herself as “shy” when she first came to the school — so shy, in fact, that she would only whisper to her teachers. Initially intimidated by the “clutch of boys” who would regularly cluster around the ball during class soccer games, kicking in a closed circle, she suddenly found an opening — and her courage.

“One day I just went in there after the ball and it was fine — I didn’t die,” she said with a laugh. “So that really is something that laid the foundation for me jumping in and participating in my life since then. I’m not shy to stand up and talk or complain.”

She also noted the long friendships that were formed at the school: She and Andrews are part of a group of nine — five of whom, including Grenell and Andrews, are Antioch School alumni — who have met weekly via Zoom since the beginning of the pandemic.

“I have lifelong friendships — very, very tight friendships — and that might have happened anywhere, but it did happen at the Antioch School,” she said.

Andrews, too, said her experiences at the Antioch School informed her later life’s work as a theater administrator for the Hartford Stage Company in Connecticut, and then the Arizona Theater Company in Tucson, where she now lives.

“It’s kind of based on what I’m sure started at Antioch School for doing school plays — everybody sort of does whatever is necessary,” she said. “I credit [the school] with helping me understand that I was there to support the work, and that was what everybody was there for.” 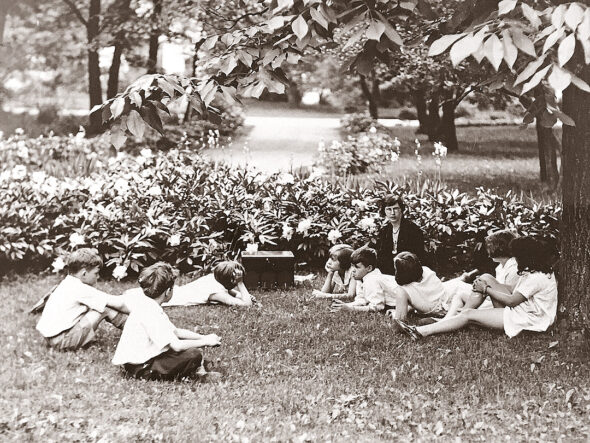 Pictured above are students and a teacher from early in the school’s life in the 1930s on the grounds of its original location, the former home of Judge William Mills. (Submitted photo)

For Heller, now 92, who went on to pursue music as a pianist; artwork through dollmaking, which she called a “long story,” the short version being that she was once contracted by “Zippy the Pinhead” comic creator Bill Griffith to make dolls bearing Zippy’s likeness, and now writing, she said the Antioch School encouraged her never to worry about what she was creating — only to revel in the joy of creation.

“People are afraid sometimes to start doing something creative because they think they’re not going to be good or something — that would never occur to me,” she said. “Nobody told us about any of those things. We could do what we wanted.”

Heller added that she hasn’t been back to Yellow Springs since her family moved away in the early ’40s — though her daughter, Julia Payne-Lewis attended the Antioch School in the 1970s, staying with a family friend in the village while Heller and the rest of her family lived in Maine. Both Heller and Payne-Lewis plan to return to Yellow Springs for the upcoming reunion, as will Viemeister and Andrews.

Now a resident of Rochester, New York, Heller said she’s excited to return to Yellow Springs — which she called part of her “bucket list” — and see the ways both the school and the village have changed in the eight decades since she left.

“It was like growing up in a paradise,” she said. “I’m not sure I will recognize the town, but I’m thrilled to death to see it again.”

The Antioch School 100-Year Class Reunion will be held Thursday, Oct. 20–Saturday, Oct. 22, at various locations. The celebration will kick off at 6:30 p.m. on Thursday at the Antioch College Foundry Theater with food and drink, slide shows, entertainment, toasts and sharing.