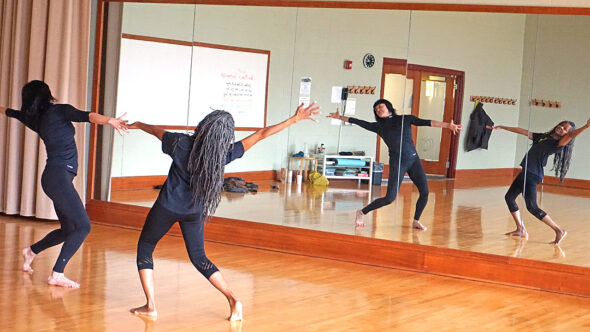 Terry Hempfling, left, and Valerie Blackwell-Truitt rehearsed a piece for the upcoming Valerie Blackwell-Truitt Community Dance and Performance Arts Concert and Art Exhibition. The annual community concert, which has not been held since 2019 due to the pandemic, returns to the Foundry Theater on Friday and Saturday, Dec. 2 and 3. (Photo by Lauren “Chuck” Shows)

Though the pandemic halted many of the events to which the community’s cycle is attuned, Yellow Springs has slowly begun moving again to the rhythms of village life. In December, one of those rhythms will be restored in leaps and bounds.

The Valerie Blackwell-Truitt Community Dance and Performance Arts Concert and Art Exhibition returns to the Foundry Theater on Friday and Saturday, Dec. 2 and 3 — the first such concert in more than three years.

In the lead-up to the concert, villagers and dancers Valerie Blackwell-Truitt and Terry Hempfling rehearsed in a studio at The Wellness Center. They moved together, whirling and embracing, relearning and revising a dance they performed in May this year at a World House Choir concert.

Their two-woman dance is set to the song “Why Do You Hate Me?” by Columbus-based father-daughter hip-hop musicians Montez “Tez” and Makayla Mickens. Blackwell-Truitt said Tez Mickens asked her to choreograph a solo piece to be performed along with the song at the World House Choir concert, but she felt that two dancers were needed to bring the piece to life.

“I thought of Terry because we always dance so well together,” Blackwell-Truitt said. “We’ve known each other for years and she’s always willing to try different types of movements.”

Hempfling, a YS High School and Antioch College alumna, is a modern dancer and videographer who returned to the village during the pandemic after years away. She said she and Blackwell-Truitt originally crossed paths when Hempfling was in high school, transitioning from years of focus in ballet to modern dance as part of the Dayton Contemporary Dance Company’s youth ensemble.

In a village the size of Yellow Springs, being dancers, the two might have met eventually — but it was proximity, Hempfling said, that hastened their meeting.

“She lived literally right across the street from me,” she said.

“We collaborate really well — maybe she’ll be dancing with me until I can’t,” Blackwell-Truitt said.

As Blackwell-Truitt and Hempfling rehearsed, the lyrics of “Why Do You Hate Me?” reverberated off the walls of the studio: “I thought I had a little bit of time before I told you: This world don’t treat us all equally; some do. Crooked-ass cops look at us like we dumb, too, and that’s just something every Black man gotta go through.”

The lyrics of the song, framed by the 2020 Columbus killing of Casey Goodson by a Franklin County Sheriff’s deputy later indicted for Goodson’s murder, recount a Black parent explaining police violence against Black Americans to their child.

Blackwell-Truitt said social justice issues like those outlined in “Why Do They Hate Me?” were foundational to the origins of the community dance concert. Beginning in the late 1980s, Blackwell-Truitt co-directed the One Nation Performance Ensemble, which was based at Miami University, where she earned her master’s degree.

“A lot of the pieces that [One Nation] did were for social change, making people aware that there are so many of us who are different, but … that we all have things to contribute, regardless of our sexual orientation, regardless of our race,” she said.

In 1992, Blackwell-Truitt presented her first dance concert in the village at the Foundry Theater with One Nation — an event that spurred her to continue presenting performances that eventually became the annual community dance concert.

“That was the first performance that I artistically directed and produced — and I’ve been trying to do it ever since,” she said.

Some of Blackwell-Truitt’s own choreographed pieces in past community concerts have, she said, been “just for fun,” like dances set to “American Woman” or “Footloose.” Sometimes, however — true to her past work with One Nation — she’s felt like she has “something to say.”

“So how do I say something through movement? When I dance — believe it or not — that’s one of the easiest ways that I can actually express myself,” she said.

Blackwell-Truitt added that dance has not been the only way local artists have expressed themselves at past community performances — they have also made room for musical and spoken word artists. This year’s line-up will do the same: The program, among others, will feature dance and spoken word from past community dance concert mainstays Tricia Gelmini and John Booth, respectively, as well as a vocal and piano performance from villager Phillip O’Rourke.

Also included will be an exhibition of works by artists including Blackwell-Truitt’s son, Kyle Truitt, and her sister, Nisa Blackwell-Turner, as well as Hempfling, who has created prints from video recordings of past Antioch College dance concerts. These works and others will be on display in the Foundry Theater’s foyer for viewing by concert attendees.

Blackwell-Truitt said it’s been a long road to re-establishing the community dance concert; she was just a few weeks away from putting on the 2020 concert when the world slowed to a halt as a result of the pandemic. She said she had considered producing an online or livestreamed concert with dancers performing in isolation, but like many, felt the burnout associated with the screen-based activities that were so pervasive during the lockdown.

“I just didn’t have the mental energy, I guess — the desire to try to pull something like that together,” she said. “So I thought, ‘OK, I’ll just wait and see what happens next year.’ Then it’s 2021 and, oh, here we still are.”

During that time, Blackwell-Truitt also underwent knee surgery, which kept her from dancing for months. After physical therapy, as well as working with her son, Kyle Truitt, who is a personal trainer, she said she was cleared by her doctor to return to her passion. She had the chance to do so in September 2021, when World House Choir Director Cathy Roma asked her to choreograph and dance to a piece the choir would present, “I Feel Like Going On.”

As the song’s lyrics repeat — “Though trials mount on every hand, I feel like going on” — Blackwell-Truitt said returning to dance after the isolation of the pandemic and her surgery “got [her] started again.” She also began belly dancing again, a practice she gave up following the loss of her husband, Buck Truitt, who died in 2018.

“There was so much going on emotionally, and I just couldn’t function because of the loss,” she said. “But dancing last September was momentum for me, and I was like, ‘OK — we’re going to have a community dance.”

Blackwell-Truitt said she feels that dance is central to her being; her grandfather, Barrett “Buck” Gee, was a tap dancer who used to hop trains and perform from city to city in the early 20th century, sometimes with legendary tap dancer Bill “Bojangles” Robinson. When his five children were born, he taught them all to dance. That family connection to dance, she said, might be why it’s always been so close to her heart.

“It’s a part of me. I just have this need — a desire — to move,” she said. “It’s hard, but I never look at it as work. If you love something that much, why would you consider it work?”

She added that she hopes Yellow Springs audiences will see the joy she and her fellow performers feel in presenting their passions, and that the concert will become part of the rhythm of village life once again.

“It’s really important for me that people have an opportunity to express themselves,” Blackwell-Truitt said. “I just hope the audience members will have as much fun watching us as we will performing — and if something moves you, make some noise!”

The Valerie Blackwell-Truitt Community Dance and Performance Arts Concert and Art Exhibition will be held Friday and Saturday, Dec. 2 and 3, at the Foundry Theater on the Antioch College campus; both performances will begin at 7:30 p.m. General admission is $12; admission for students and seniors is $10, and children ages 8 and under are free. For more information, call 937-532-4500.