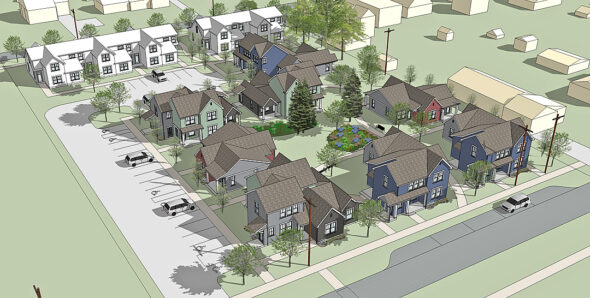 Design rendering of Home, Inc.’s newly planned senior-focused development, tentatively to be called “The Cascades,” from the southwest. The development, to be completed in four phases, is planned to include 22 senior rental units in duplexes and triplexes, and 10 for-sale townhouses for a range of ages. At the bottom of the rendering, facing Herman Street, are the eight units planned for the first phase, on which Home, Inc. hopes to break ground at the end of next year. (Rendering by City Architecture, Inc.)

At a public presentation on Thursday, Nov. 17, affordable housing nonprofit YS Home, Inc. unveiled its latest planned project: a 32-unit development on 1.8 acres along Marshall and Herman streets. The land is located behind Miami Township Fire-Rescue and across the street from Friends Care Community.

Tentatively named “The Cascades,” the housing development will be “senior-focused,” with 22 affordable rental units earmarked for seniors and 10 two-story townhomes to be sold at low cost to qualifying buyers of varying age demographics. The rental units will be built in duplexes and triplexes, with some second-floor units and mostly first-floor units. The plans for the development were designed by Cleveland firm City Architecture.

According to a 2017 Housing Needs Assessment conducted in the village by Columbus-based Bowen National Research, affordable senior rentals are among the top housing needs in Yellow Springs. The Nov. 17 Home, Inc. presentation cited the study, which found at the time that nearly 60% of senior renters in Yellow Springs had an annual income of less than $24,999.

“The need for senior housing in Yellow Springs is acute, and has only risen over time,” Executive Director Emily Seibel said during the presentation.

An affordable senior housing development has been in the works in Yellow Springs for more than a decade. In 2008, Friends Care Community purchased the 1.6-acre former Barr Property, now the site of the Mills Park Hotel on Xenia Avenue, with an aim toward developing the land with rental units for seniors; the Morgan Family Foundation purchased and gifted the land to the elder care facility.

Citing economic downturn, however, Friends Care decided to sell the land in 2011. Nonprofit Buckeye Community Hope Foundation, part of whose charge is building low-income senior housing, partnered with Home, Inc. to propose concept plans for a $3.4 million 37-unit senior apartment complex on the land. However, Buckeye released its option to purchase the property the following year when it was unable to finance the project before the option expired.

Home, Inc. and the foundation had worked to obtain financing through the Ohio Housing Finance Agency’s Low-Income Housing Tax Credit program — a competitive program that grants tens of millions of dollars of funding to low-income housing projects around the state annually — but did not receive the funding.

In 2018, Home, Inc., with the aid of a below-market-rate loan from the Morgan Family Foundation, purchased the 1.8-acre plot currently planned for development with the aim of building senior rental housing. The land was formerly part of the site that housed Wright State Physicians medical clinic; the remainder of that plot was purchased by Miami Township as the site of the current fire station.

In partnership with ​​St. Mary Development Corporation of Dayton, that year Home, Inc. began moving forward with a plan to develop a 54-unit affordable senior apartment complex that would have cost about $10 million. In 2019 and 2020, St. Mary and Home, Inc. again applied to receive financing through the Low-Income Housing Tax Credit program, which would have offset about 75% of the development’s cost, but were denied both times.

At the same time, local residents were vocal about disliking the designs put forward for the proposed apartment complex, citing both the edifice’s height and its aesthetic as drawbacks. The location of the development, which is near emergency services and located along a Greene CATS public transit route, was considered a plus, however.

Over the last two years, Home, Inc. has gone back to the drawing board in its approach to developing affordable senior housing, according to the presentation. The organization’s new plans come after listening sessions and a survey conducted by Home, Inc. this summer, as well as past work sessions and meetings with Village Council, Planning Commission, local seniors and neighbors who would be affected by the development.

Feedback from those sessions netted a few refrains on desires for the new development: an aesthetic that fits in more closely with the surrounding neighborhood with plenty of greenspace, private entrances for renters and a mixture of second- and first-floor units to address a range of accessibility needs. The most desired amenities cited by those surveyed were laundry facilities and porches for each unit and adequate parking.

Those already living in the neighborhood cited construction disturbances, stormwater retention and runoff as concerns, according to the presentation. Also cited was a desire to retain a portion of a small wooded area at the back of the 1.8 acres, where deer often take refuge.

“As a deer advocate, I pledge that we will be as sensitive as possible to the wildlife,” Seibel said.
Because Home, Inc. was unable to secure tax credits for the senior housing project, the nonprofit has pivoted toward building the development in phases, with funds being raised as the project progresses. The first phase will be devoted to eight senior rentals along Herman Street, facing Friends Care, with two triplexes and one duplex. The estimated development cost for the first phase is $1,938,755, with the entire four-phase project expected to cost around $8 million.

During the presentation, Seibel said that Home, Inc. had already obtained commitments of $385,500 from the Village of Yellow Springs and the Ohio Department of Developmental Disabilities toward the project; she also announced she had just received word that day that another $400,000 had been committed to the project by the Federal Home Loan Bank Affordable Housing Program.

“So the next stop, now that we have close to $800,000 with Phase One, is to go in next year for Ohio Housing Finance Agency gap funds,” Seibel said, referencing financing through the agency provided for projects not utilizing tax credits. “And right now we’re fundraising for just under $200,000. … We’re very confident that this is moving forward, and not in several years — moving forward into the next year is our goal.”

To view an infographic slideshow used by Home, Inc. during the presentation, go to yshome.org/recent-news.html and scroll down; a video of the full presentation will be posted on the same page at a later date.

*The writer of this report is married to a member of the YS Home, Inc. board and owns a home purchased through Home, Inc