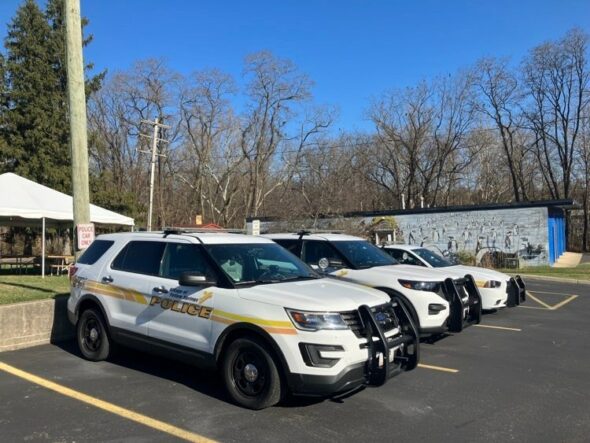 At a meeting on Tuesday, Nov. 1, Yellow Springs Police Chief Paige Burge gave a presentation on the police department's expenses and estimated the coming year's budget at $1.7 million. (Photo by Reilly Dixon)

A recent spike in officer and dispatch turnover, higher overtime costs and mounting expenses to maintain and replace outdated equipment are among ongoing challenges identified by the Yellow Springs Police Department in proposing a 2023 budget totaling $1,731,805.34.

The increase, Yellow Springs Police Chief Paige Burge told the News, primarily comes from the department’s growing capital expenses to replace, repair or update some of the technologies upon which staff and officers rely.

Principal among those technologies that need servicing are the department’s Tasers, a police cruiser and the hardware needed to integrate the forthcoming body-worn camera technology, Burge said.

The proposed budget also accounts for the creation of two new positions — a full-time dispatch supervisor and a deputy chief, who would serve second in command to Burge. Additionally, many staffers would receive wage increases that are more aligned with the wages of neighboring police departments, according to Burge.

All these expenditures and more were explored on Tuesday, Nov. 1, when Burge gave a virtual presentation before Council members Kevin Stokes and Gavin DeVore Leonard. Also present at the meeting were Village Manager Josué Salmerón and Village Clerk Judy Kintner. Burge’s presentation came amid the continuing conversations within the Village government about the coming year’s overall budget.

“I wanted to come at [my department’s] budget from a new perspective,” Burge said. “I’ve done what I believe can provide some insight and clarity into what the department’s needs are, and to propose cost savings and revenue opportunities.”

In her presentation, Burge drilled down on three areas of the department’s needs: capital, operational and personnel, with particular focus on the latter. Personnel costs, Burge said, account for 80–95% of the annual budget, and include not just salaries and wages, but also the department’s mounting turnover and overtime costs.

Since 2021, the department has spent over $136,000 on turnover costs as a result of losing two police officers, two dispatchers and a chief of police. Former Chief Brian Carlson left the department in November 2021.

Acknowledging the plethora of reasons a staffer may leave the department, Burge honed in on the wage disparity between the Yellow Springs Police Department and other departments in Greene County. She emphasized the need to retain and bolster staffing levels — by increasing wages — to prevent burnout and turnover among her staff.

“For the overall department, I want to commit to wage scale adjustments to be more competitive in today’s job market,” Burge said. “Longevity is a critical piece in achieving the policing style that’s expected of us. The longer we have [an officer] in the community, the more intimately they know that community.”

Referencing data she compiled by reaching out to every police department in Greene County, Burge pointed out that the Yellow Springs Police Departments’ wages trail behind the county average. Whereas an entry-level position with the YSPD starts at $24.18 per hour, the county average is $25.68. The Beavercreek Police Department, for instance, pays its entry-level positions $31.69.

She said the wage-scale adjustments she aims to implement would cost $5,520.36. An added “shift differential” pay increase of $1 more per hour to those officers and dispatchers who work less desirable shifts, such as weekends and nights, would add an additional $16,224 to the budget. That’s a total of $21,744.36 on department pay hikes.

Paying her staff more, Burge said, would allow the department to save money in the long-run.

“Small agencies such as our own have historically been viewed by other, larger agencies as starter agencies,” Burge said during her presentation. “In other words, you hire [officers], you work out all the kinks with them, invest money in training them, then after three to five years [larger police departments] will swoop in and offer them a few more dollars.”

Burge continued: “We cannot afford — with the community expectations of our officers — to lose the people we’ve invested the time and money into, especially if we’re losing them for such a small price to pay.”

Burge told the News she’s been averaging 60 hours a week since she took over from Carlson — many of which are spent on “road coverage.”

“People who are not overworked, who feel supported and have the equipment and training to do their jobs do [those jobs] better,” Burge said at the meeting. “Over the last several months, [scheduling] was a huge challenge. It really contributed to officer burnout, and we’re still recovering from that, despite bringing on additional people to alleviate that.”

Burge concluded her presentation by reminding the two Council members of the department’s ongoing efforts to generate revenue for the Village. A recently implemented program in which a YS police department officer serves as a school resource officer at the county’s Educational Service Center is on track to generate over $18,800 annually.

She added that the department is also continually on the lookout for grant opportunities to help subsidize future costs.

Village Council will review the department’s proposed budget in a work session on Thursday, Dec. 1, at 3 p.m. Following that work session, Council is scheduled to vote on the Village’s overall 2023 budget at the group’s regularly scheduled meeting on Monday, Dec. 5.