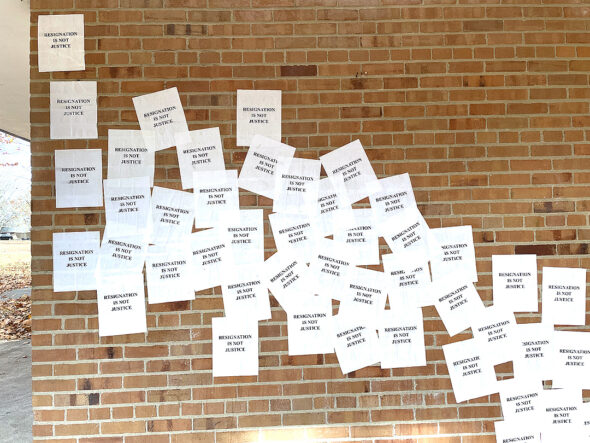 Signs reading “Resignation is not justice” were plastered on buildings throughout Antioch College’s campus following an Oct. 25 campus Community Meeting, during which a student publicly shared a sexual encounter that had occurred between them and an Antioch faculty member. Dissatisfied with the college’s investigation of the incident and the resignation of the faculty member in question, many Antioch students have been advocating for changes to the Sexual Offense Prevention Policy, or SOPP. (Photo by Cheryl Durgans)

The message sent by students to Antioch College administration, board of trustees, faculty and staff gathered on campus for a Friday, Oct. 21, board meeting: “Resignation is not justice.”

That message — handwritten in chalk on brick walls outside the library and other buildings and printed on simple 8.5” x 11” white copy paper with bold, black letters — was an act of protest in response to the administration’s handling of an investigation that revealed a sexual encounter had occurred between an Antioch professor and student last summer.

The News reached out to the involved student for comment, but they declined. A written statement presented by the student at an Oct. 25 public meeting on the Antioch College campus, and printed in the Nov. 2 issue of The Antioch Record identified the professor, though the college declined to name them.

The student wrote: “I used all avenues available to me to seek accountability. Instead of filing my case under Title IX, administration mishandled my report as solely an HR matter.”

According to Antioch College President Jane Fernandes in a recent interview with the News, the encounter was in violation of the college’s sexual misconduct policy. Fernandes confirmed that the professor resigned from the college before a termination process initiated by the college was completed.

In an email statement to the News, Fernandes wrote that the sexual misconduct policy is included in the college’s employee handbook, which is a different document from the college’s Sexual Offense Prevention Policy, or SOPP. The handbook states: “Sexual relationships between Antioch College faculty members or staff and Antioch College students are unacceptable and constitute professional misconduct.”

Fernandes said the college responded immediately after learning about the situation.

“We remain committed to standing by our students,” she said.

Fernandes also wrote in the email that, “Faculty, administrators, and staff members are strictly prohibited from dating, pursuing to date, pursuing, or having romantic or sexual relationships with students,” and that, “college employees who are found to violate this policy will be subject to appropriate disciplinary procedures, up to, and including termination of employment.”

According to a statement made by students, which was submitted, with a list of 11 demands, to the college in October and later obtained by the News, the administration’s investigation and response fell short, and was perceived to be both “unethical” and a “cover-up.” Seemingly frustrated by a lack of accountability, students wrote: “Without accountability, there can be no justice.”

Students demanded an update to Antioch’s current SOPP and other non-fraternization policies. Students also called for the policy to be reviewed and updated periodically, along with “explicit definitions for affirmative consent, assault, quid pro quo, harassment and coercion.”

Antioch’s SOPP was created in 1991 and at the time, was considered groundbreaking policy in higher education in its attempt to protect students, faculty and staff from sexual harrassment and discrimination.

Along with an updated SOPP policy, demands made by students also include:

• Appointing a third-party contractor to assess how closely the college follows its own SOPP policy.

In speaking with the News, Fernandes confirmed the administration’s receipt of the list of demands.

“[I] am working to respond to the thoughtful demands from students, while we will continue to honor the confidentiality of all involved,” she wrote. “I understand why people are upset. I am also upset and appalled.”

Fernandes said she is committed to reviewing current policies for potential improvement, including receiving comprehensive input from students and staff. She said the response, in deference to the fact that most students will be away from campus in November and December, will most likely be finalized by mid-January 2023.