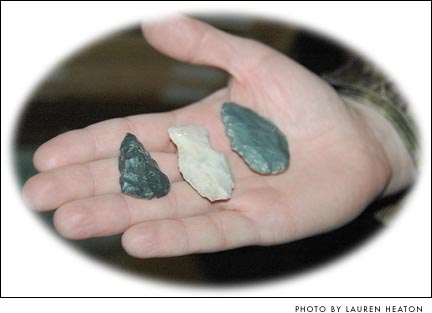 The completion of the Baldwin Artifact Collection of Native American projectile points and tools, such as those shown in Glen Helen Ecology Institute Director Nick Boutis’s hand, will be commemorated by two archaeologists speaking at the Glen Building on Wednesday and Thursday, March 12–13, at 7:30 p.m.

The unveiling of a collection of ancient Native American points and tools donated to Glen Helen 20 years ago may not play like a riveting drama. But talk to natural historian Geoffrey Sea, and he might convince you of quite the opposite. His work on the mound-building societies who made these tools has contributed to a theory that Ohio may be the site of the world’s earliest known astronomers. And talk to archaeologist Bob Riordan about the 6-acre earthworks built in the South Glen, oh, about 2,000 years ago. He might say there’s a lot more to a so-called “arrowhead” than the chert and flint that composes it.

Both scientists will speak about the history of the Glen’s native inhabitants next week to contextualize the opening of the Baldwin Artifact Collection, a treasure trove of perhaps 200 artifacts from the early Adena, Hopewell and Fort Ancient peoples now on display at the Glen. The collection was donated to the Glen in 1979 by Bob Baldwin, senior, whose father-in-law, Frank Knox, collected native artifacts as a mining engineer around Scioto Valley, Ohio, Kentucky and West Virginia between 1910 and 1925. Baldwin died in 1982 before the exhibit became public, but the display of the collection’s best specimens currently housed at Trailside Museum opens the door to a history of place that, according to Glen Helen Ecology Institute Director Nick Boutis, few are aware of when they visit the Glen.

Riordan will speak about the Baldwin collection on Wednesday, March 12, at 7:30 p.m. in the Glen Building. A professor of anthropology at Wright State University, Riordan did some excavation of Bell Works earthworks in the South Glen in the 1980s and found previously-known evidence of a 6-acre polygon embankment thought to have been built by the Middle Woodland people approximately 2,000 years ago. His talk will also touch on other earthworks in the Glen, such as Orator’s Mound and several rock shelters.

Sea’s presentation the following evening, Thursday, March 13, at 7:30 p.m., will focus on the three animals, the passenger pigeon, the rattlesnake and the black bear, thought to be sacred to the Scioto people who settled along the Scioto River corridor through central Ohio.

Sea, who lives near Piketon, Ohio, on one of the oldest known geometric earthworks in the Americas, has been involved in several decades of research on the chronology of Ohio’s native cultures. Sophisticated forensic tools such as radio carbon dating and pollen analysis revealed in the 1990s evidence that the Scioto people were not agrarian, as previously thought, but were instead eating primarily seeds and nuts, especially acorns found in abundance in this region, Sea said.

These are the same people, according to Sea’s research, who apparently knew enough about the earth’s relation to the stars to mathematically map out and build enormous earthen walls 15 feet high and encompassing up to 20 acres, according to Sea, in the shape of a perfect square whose sides are aligned to the cardinal directions.

“Some of these earthworks are 40 percent larger than the base of the great pyramids, large enough to fit 50 Stonehenges inside of them, and they are built to a degree of exactitude that we have no way to explain,” he said. “This puts almost all construction in the world to shame.”

But Sea goes even further to explain the significance of these new connections to our general understanding and current application of human development. If these hunters and gatherers developed a sophisticated knowledge of astronomy, then the traditional concept of the chronology of mankind that begins with migratory hunting and gathering, and advances into settled agriculture, and from there on to scientific understanding and more centralized civilizations, is “completely wrong,” he said.

The evidence also points to the fact that Ohio’s native people, who were previously thought to be descendants of the great Mayan civilization, can be shown to predate the Mayans altogether, according to Sea, and suddenly makes Ohio one of the richest historic places in the world.

These discoveries have great power to inform our society today as well, according to Sea, who says that the patterns of mythological worship of Ohio’s Miami and Shawnee people point to the passenger pigeon, rattlesnake and black bear, all of which were important to wetland ecosystems like the Glen but are now extinct or are no longer present in this region of the country.

“It’s important for us to step back and look at what we’ve done in our modern society by eliminating all three species so that there are none left in these locales,” Sea said. “If we can appreciate that tremendous cultural exuberance came about from the incredible animal life here, we can begin to lift our psychological block and admit that’s the natural richness we’ve eliminated.”

The objects from the Baldwin Artifact Collection on display include hammerstones, spears, darts and other projectile points, affectionately known as “arrowheads” but technically used not with a bow but with a sling thrower known as an “atlatl.” According to Boutis, they range from the Archaic Period at the end of the Ice Age, 8,000 to 500 B.C.E., through the late Woodland’s Adena and Hopewell cultures all the way to the Fort Ancient cultures ranging from 1000 to 1650 C.E.

While some of the objects will remain on display, Glen staff members plan to develop educational programs using the rest of the collection, Boutis said. He hopes the artifacts will help residents and visitors remember the history of the Glen and the lessons we can draw from it.

“The story of the passenger pigeon’s extinction is one we lose sight of, but it’s an important parable about humans’ ability to lose track of the things that were held sacred in North America, Yellow Springs and the Glen before we began converting this area to other uses,” Boutis said. “Learning about the wildlife here helps us understand our local history and our place in it.”