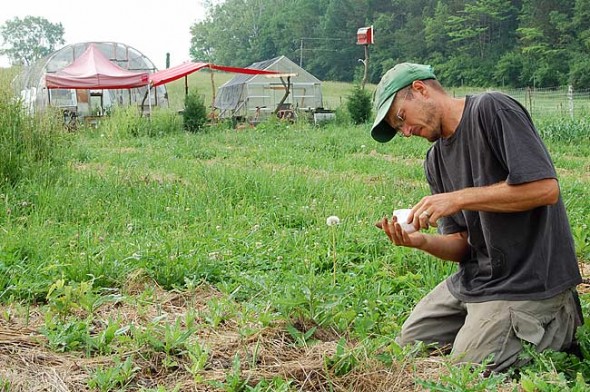 Both farms have thrived since going into business in 2006 by growing vegetables directly for their members using a model called Community Supported Agriculture, or CSA for short.

“There’s a more intense connection between people and the farmers who grow food for them,” said Kat Christen, co-owner of Smaller Footprint, a three-acre farm at Fowler and Jackson Roads. “You’re their farmer for the whole summer.”

Members pay for a share at the beginning of the season and each week from late May through mid-October pick up a bag of fresh vegetables — everything from crisp kale to hearty potatoes, depending on what’s available.

Both farms are still accepting new members for this year. A share costs $425 at Smaller Footprint Farm and $460 at Heartbeat Community Farm. For convenience, shares can be picked up in town at the farmers’ homes.

By paying ahead of time, members share the risk, and the bounty, with the farmer, who is guaranteed a fair price for his work, said Andrew Manieri, owner of the two-acre Heartbeat Community Farm on Swimming Pool Road off of State Route 343.

“CSA is a deeper commitment to good farming and good farmers,” he said.

While some people join CSAs because of the ecological benefits of consuming local, naturally-grown food, there are other reasons as well.

“For many people, it’s not ethics that attracts them to CSAs, it’s the freshness of the food,” Manieri said.

Kat and Doug Christen view farming as a natural extension of their ecology backgrounds.

“So much is connected to the growing of food — the health of the environment, the health of the community and the health of our bodies,” Kat Christen said. So when Eric Wise began looking for someone to start an organic farm on his property, the local couple jumped at the opportunity.

Manieri founded Heartbeat on a property once owned by Willis and Rod O’Connor, who specified in a conservation easement that the land be farmed organically. Having visited more than 150 farms, Manieri, a local resident and former philosophy student at Oxford in England, noticed that CSA farmers were the happiest.

“They had that security and connection with the community,” he said. In addition, Manieri said that CSA farmers can focus on giving people the best quality food using the most sustainable practices, rather than producing the largest quantities of food as cheaply as they can.

In fact, both farms have aimed to be as sustainable as possible, growing their food without pesticides or synthetic fertilizers, sourcing compost materials locally and minimizing the use of machines.

These methods have paid off, Kat Christen said, as the amount of organic matter in the soil has doubled in the farm’s first five years.

At Heartbeat, the overall plant diversity has increased, according to Manieri.

“The soil has become loose and deep and rich, to our amazement,” he said. Manieri additionally protects soil fertility by not tilling, which disturbs the soil’s biodiversity.

“The soil is a complex ecosystem — it’s our rainforest,” he said.

Over the years, the two farms have found valuable sources of fertility at local restaurants and coffee shops. Smaller Footprint gets compost food scraps from Ha Ha Pizza, the Winds and Main Squeeze, while Heartbeat recycles the food waste from the Emporium, Sunrise Café and Brother Bear’s. In addition, both farms use locally-sourced horse manure.

Though the CSA model has existed in Europe and Japan since the 1960s, it didn’t take root in the United States until the early ’90s. Today there are about 3,200 registered CSAs in the country, according to online farm database Local Harvest, including 144 in Ohio.

Another local farm, Orion Organics, began offering CSA shares in 2007. Though the 25-acre farm mainly sells to restaurants, they are also seeking new members for their 40-member CSA at a share price of $425.

“The customers have a greater appreciation of where their food comes from when they see the farm — the dog, the cows, the chickens, the strawberry patch,” said Megan Walsworth, farm manager at Orion.

While CSA members at Heartbeat favor peas, lettuce and cherry tomatoes, they have also started eating a wider variety of vegetables, including some previously unknown ones like kohlrabi, edamame, and daikon radishes.

“One of the beautiful things about CSA is also one of its greatest inconveniences — it changes how you eat,” said Manieri, who grows around 300 varieties of 40 different vegetables. “In a few years with us, our members have grown to love the variety, whereas they said they used to hate leafy greens, like kale.”

Heartbeat Community and Smaller Footprint have changed significantly over the years. Growing practices have improved, relationships with members have deepened and more people are helping to share the work.

In addition, Smaller Footprint has hired two interns from local colleges, who are contributing their labor in exchange for a CSA share, housing with a local family and an education in farming.

Heidi Heckel, 20, a University of Dayton student, had never heard of kale before coming to work on the farm. “It’s a big difference from conventional agriculture and I didn’t realize it,” she said.

At Heartbeat, in addition to two full-time farmers and one part-time farmer, an average of four to five volunteers per week come to help. But the biggest change has been to Manieri as a farmer, who now sees himself as just another species in the garden.

“I had more desire for control in the garden,” he said. “Farming has brought me much closer to real nature rather than nature as humans want it.”

“It’s a matter of people in the community deciding what they want and using their food dollars to support that,” she said.

“If we want to be locally adapted people who thrive in this area, we need to eat what grows here, not from places thousands of miles away,” he said.