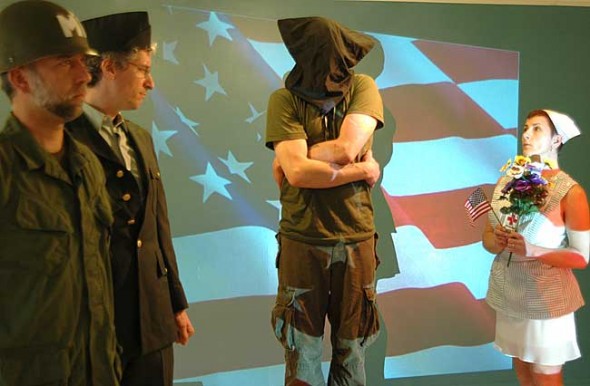 A contemporary music, theater and dance performance of Igor Stravinsky’s Soldier’s Tale score with a libretto by Kurt Vonnegut will be presented at 7:30 p.m. on Saturday, April 23, in South Gym at Antioch College.

The free performance features an ensemble from Columbus Symphony Orchestra collaborating with the director and choreographer team of Rani Deighe Crowe and Melissa Heston and their company of local dancers and actors. The event is sponsored by the Johnstone Fund for New Music.

Based on a Russian folk tale, the Soldier’s Tale follows a deserting soldier who sells his soul to the devil in exchange for a book that predicts the future. The virtuosic score that Stravinsky composed for The Soldier’s Tale in 1918 has been re-conceptualized many times. In 1993, novelist Kurt Vonnegut revamped the story to explore the life of Eddie Slovik, the only American soldier executed for desertion in World War II and the first since the Civil War.

One Response to “Free Soldier’s Tale Performance at Antioch”