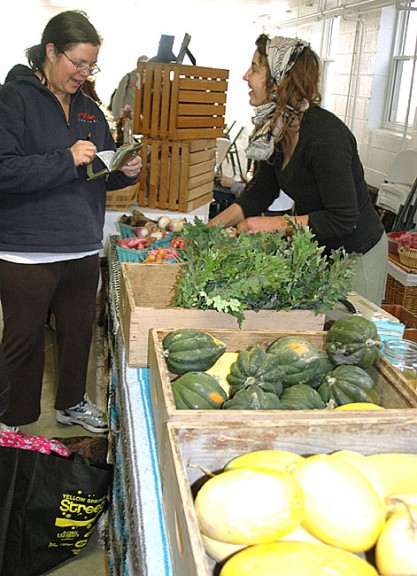 A good crowd turned out for the first winter farm market of the season last Saturday, held in the basement of the United Methodist church. Shown above, market co-organizer Amy Magnus buys some fresh greens from the produce of Patchwork Farm near Trotwood, helped by Patchwork employee Kate Salatin. (Photo by Diane Chiddister)

At winter market, greens in the gray

Fresh, locally grown vegetables, including kale, radishes, carrots and turnips. Nutritional snacks made of vitamin-packed nettles. Homemade granola in flavors of blueberry, apple and coconut. Socks and scarves made from the wool of alpacas. Homemade soap. Dried fruits and nuts. Sausage from locally raised pigs. Homemade chicken pie from local chickens. And cinnamon rolls made from scratch.

These are only some of the products available at the Yellow Springs Winter Farmers Market on Saturday mornings, which launched its third season last Saturday, Jan. 7, in the basement of the First Methodist Church. A good crowd turned out for the market, which did not in the least surprise organizer Roger Reynolds.

“Three years ago we started out with four vendors and on the first day, 200 people showed up,” he said in an interview. This year, organizers, who accept products grown or made within a 50-mile radius, expected about 15 vendors and several hundred shoppers.

The village clearly wants a winter venue for fresh produce and local foods, and Reynolds and co-organizer Amy Magnus, both members of the church, are pleased that the Methodists are able to host such a popular event.

For Reynolds, the reasons to host a winter market are many. The market provides revenue to local farmers, and helps the village develop a sustainable economic resource. The event also helps to educate people about nutrition, and provides fresh local food during the winter months.

And he especially appreciates that the market helps build community.

“My impulse is that I just enjoy the Saturday farmers market,” he said. “I like to get a cup of coffee and talk to people.”

Retired from Wright Patterson Air Force Base and a former adjunct professor at University of Dayton, Rogers appreciates food mainly as an eater, he said, crediting his wife, Macy, for her cooking and gardening skills. Magnus, retired from the Air Force but still working as a research assistant professor at the Air Force Institute of Technology, has been a foodie all her life, and also writes a food blog, the Village Gravy. After moving to the village in 2007, she found herself becoming involved with local food issues.

“I always fall in with the foodies wherever I am,” she said.

Villagers’ interest in, and appreciation for local food helps to draw the vendors to bring their wares to the church basement each week. Vanessa Fallas of Kettering, who makes the homemade granola, said she doesn’t mind traveling to Yellow Springs because the village market has a unique appeal.

“I like the people here, that it’s a community,” she said. “We have one in Kettering but it’s not the same.”

Kate Salatin of Patchwork Gardens in Trotwood, which on Saturday offered a variety of greens and root vegetables, also appreciates the sophistication of Yellow Springs shoppers.

“The customer base here really appreciates what goes into raising food the natural way,” she said. “I get so much life from getting fresh produce to people. They need good food.”

A thriving winter farmers market is good for the village economy, according to Chamber of Commerce Executive Director Karen Wintrow, because it brings new people — both shoppers and vendors — to town.

“The farmers market here in the summer has such a following that it’s great for people to have a place to go during the winter as well,” she said.

Local farmer Doug Anderson of Anderson Farm brings to the market sausage made from the pigs he raises, along with winter squash, and during the summer he brings an array of vegetables to the Kings Yard market. While most of his farm income comes from raising corn and soybeans for wholesale, he gets the most pleasure from growing his own vegetables and bringing them to the market, he said, especially after the 10 years he spent working at a large commercial farm.

“It’s challenging to make a living this way, but I’ve worked on the other end before,” he said. “This is something I can feel good about at the end of the day.”

The growing popularity of the local winter market follows a national trend, according to a January 8 article in the Columbus Dispatch. In Ohio, which ranks fifth in the nation in the number of winter farmers markets, 50 winter markets are operating in the state, up from 34 last year, according to the U.S. Department of Agriculture. And nationally, winter farmers markets increased about 38 percent, to 1,225 compared to 886 last year, the USDA states.

The national trend follows Americans’ growing interest in eating healthy food and farmers’ increased efforts to meet that demand, according to Adam Schroe­der, president of the Farmer’s Market Management Network, a Columbus-based collaborative of markets cited in the

Dispatch article. That article also quotes Kathleen Merrigan of the USDA on ways that farmers have lengthened their growing season, including building hoop houses, which are similar but less expensive than greenhouses, to extend the growing seasons. The hoop house structure is simply wood or metal covered in layers of plastic, which trap daytime heat inside.

The Methodist Church organizers are looking for more vendors, especially anyone who has local greens through the winter. But there’s also a waiting list of four vendors who have been turned down, mainly because their products duplicate those of other vendors, Reynolds said. While he and Magnus enjoy their association with the winter market, they’d be happy to hand it over to others, and would like to see a larger site so the market could include all who are interested in taking part.