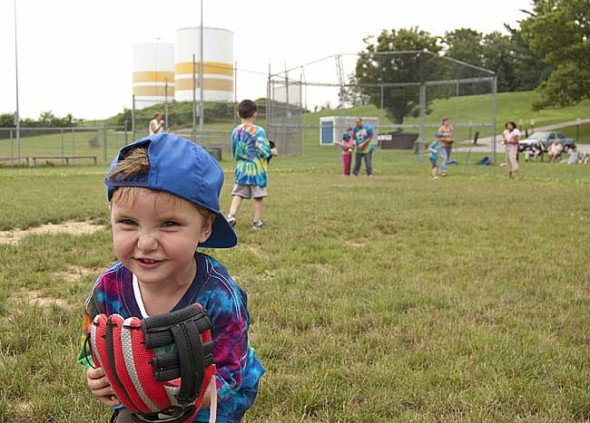 Perry League t-ball starts up again on Friday, June 1 at Gaunt Park. Pictured is Oriah Foley in June of 2010. (Photo by Aaron Zaremsky)

A true horoscope for t-ball

My horoscope for today — Sunday, May 13, the day I am writing this — says, “You’ll expend more than the usual amount of effort chasing after others, trying to get them to take care of themselves and be safe, aware and smart.”

“Chasing after others”? Yes, I am chasing after those darlings; they can be angels, they can be devils — or at least “devilish.” Our young children, our toddlers, kindergartners, middle childhood-aged kids, girls and boys ages 2–9, we invite once again to join the Perry League and play some t-ball with us, Yellow Springs style — which is free and open to all regardless of race, color, creed, physical ability or disability; which is seriously, assiduously non-competitive; which is (we hope and try to be) loving, kind, patient, welcoming to all; which is quite often wonderfully silly, even hilarious and which is all-volunteer.

“Trying to get them to take care of themselves?” Are we? In t-ball?  Well, yes, you might say so. Like when we’re yelling, “Look out!” Or when we’re warning each other, calling out to each other, “Heads up!”

Even when we’re enjoining our t-ballers to “Keep your eye on the ball!” we’re trying to get them to take care of themselves? Well, perhaps, but we say it and there’s an agony on the face of that sweet wee-bit of a dear, she’s 3, and she (and every one of our 3-year-olds as far as we can tell) is completely and totally literal.

“Trying to get them to be safe, aware and smart.” Yes, I guess that is true, too. We are teaching them (making them aware?), if only a little bit, the beautiful game of baseball, teaching them when we’re exclaiming over and over again, they’ve hit the ball, they’re standing there at the plate, as still as a summer night, doing nothing, not knowing they’re supposed to do anything: “Run! Run! Run!”

And, check this out, we are helping them become smarter, because we get them to run, we let them run, we watch them run, we run with them. And, now here’s a wallapaloozer, when we run, we get smarter  Yes, it’s true. I just read it in the New York Times: when we run, our brains create new brain cells, and these new cells, as one scientist said, “multitask”. The neurons are lit up later when we’re doing things, cognitive things, other than running. They don’t just work when we’re running. Apparently the brain creates new cells with other physical activity, but only those created by running “multitask.”

So come out. Chase after the little ones with us. Help us keep them safe, help us make them aware, and watch with us, as they get smarter and smarter, running! Running! Running!

That’s the Perry League, Yellow Springs’ t-ball program, our beginners baseball program for girls and boys, ages 2–9. We kick off our 2012 season Friday night, June 1, 6:30–8 p.m., and will be out there at Gaunt Park for ten Friday nights until Aug. 3, when we end the season with our wiener roast potluck picnic trophy night.

Another exquisite summer of t-ball is upon us. Wanna play?