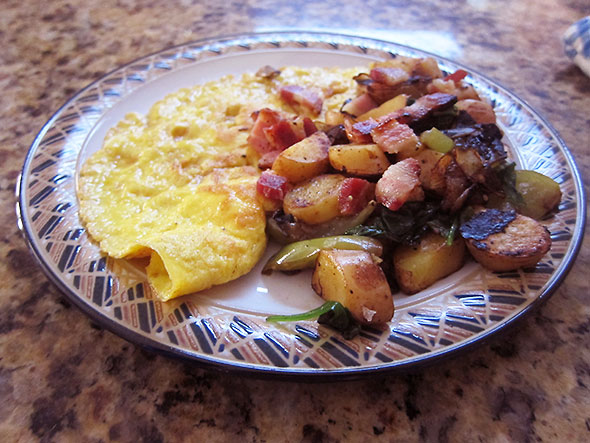 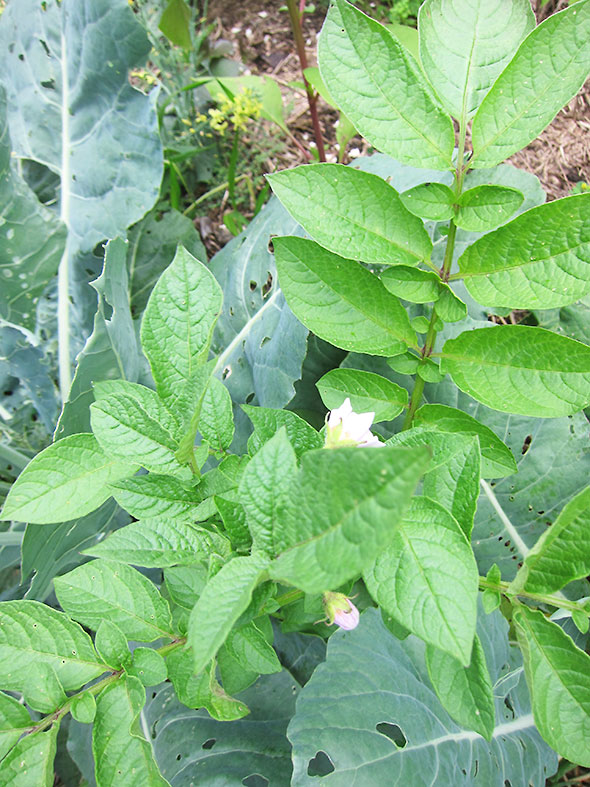 The summer star of my garden is the potato. I planted seed potatoes about the garden on warmer winter days then largely forgot about them. When they began sprouting around Mother’s Day, the first shoots might have been mistaken for a tomato plant. However, the maturing stalk sprouted leaves in a clearly distinct pattern alternating small and large leaves. The potato leaf itself unfolded in a shape less complicated than a tomato’s and fleshier. Its flower buds also proved more voluptuous.

As my potato plants grew, I piled straw on top. Hilling, or burying the plant loosely, promotes root growth and thus more potatoes. Resplendent sun lovers, the plants on the southern slope of my lawn grew three feet tall then flowered white and purple as the summer began. Heirloom potatoes are sensitive to daylight hours. Stored buds sprout in the winter as the days get longer, and new tubers form now as the days get shorter. 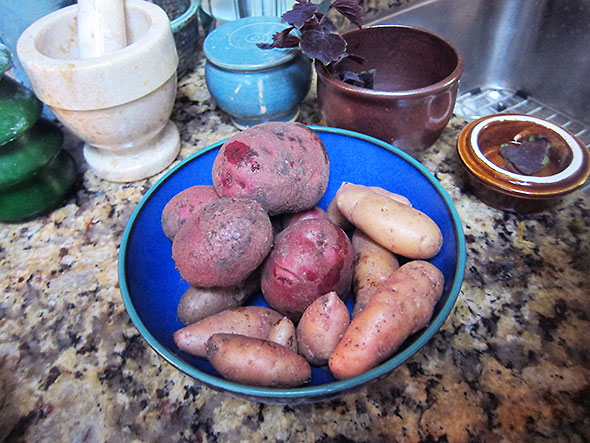 I harvested potatoes from two of my gardens this week. The more fertile garden on the southern slope produced mature red-skinned tubers. The soil here was particularly rich from the buried wood, compost, and worm castings I added. A side garden yielded flesh-toned fingerlings. The fingerlings were less mature telling me that soil in this side garden needs attention and I suspect better irrigation, but I can’t really complain. I rather like the thinner skinned new potatoes, and once in my kitchen they were the first ones I reached for. 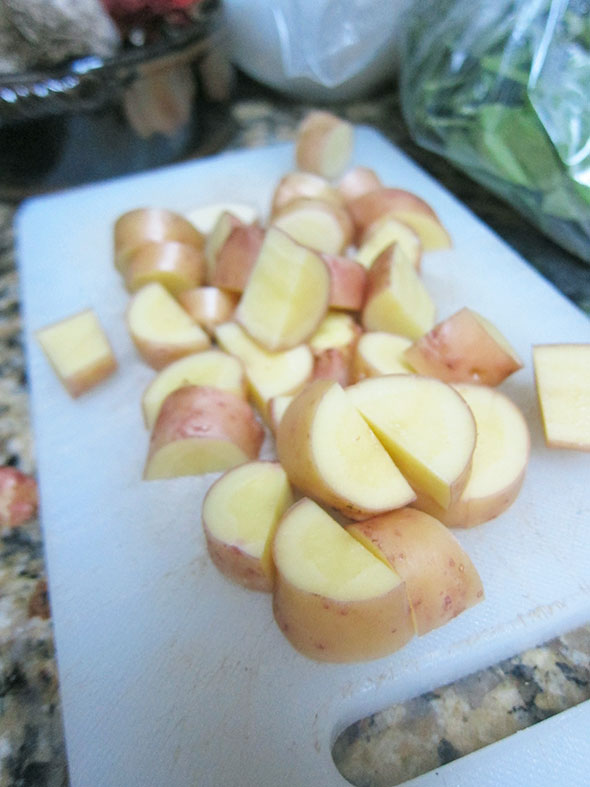 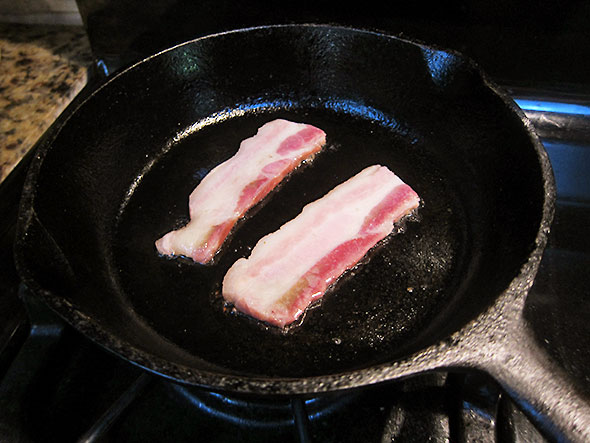 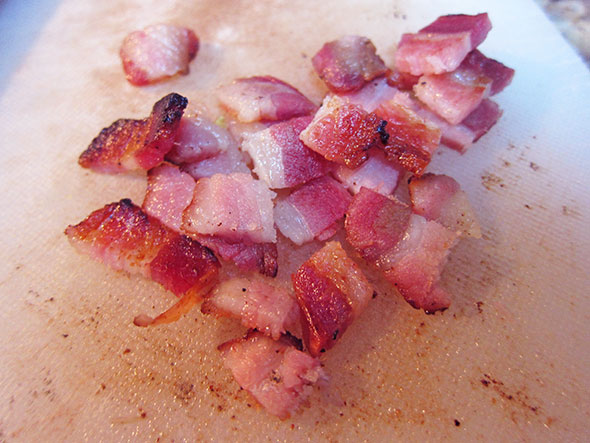 Another thing I reached for was a slice of my favorite bacon, a thick slab from the hind of pigs at Anderson Farms. I had a sudden craving for breakfast potatoes just like my sister Kate makes. I imagined her at her stove throwing the chopped vegetables in the air and set to work.

Place the bacon in a cool skillet and cook over medium heat. The fat will rend and provide the grease for cooking so use more bacon if the strips are lean. Turn the bacon strips when the white fat turns pale and the meat reddens. Remove from the skillet before crisping occurs and place in a bowl to drain and form into curls. The strips will dry out as they cool and the bowl will collect grease that can be added back to the skillet. Add the onion to the skillet and toss to coat with the bacon grease. When the onions become tender, add the potatoes and cover the skillet. Wait a minute before tossing to allow the potatoes to caramelize. Cover the potatoes again and, after 5 minutes, add the chopped tomatillo. Toss and cover. When the potatoes have cooked for 10 minutes and the tomatillos have cooked for 5, add the spinach on top to wilt and cover the skillet again. Give one final toss to mix the vegetable medley and serve. 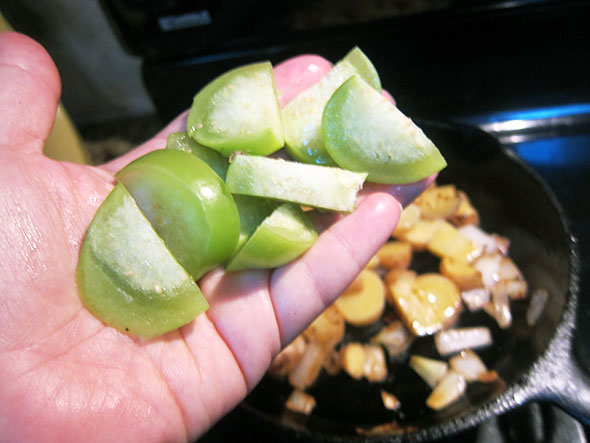 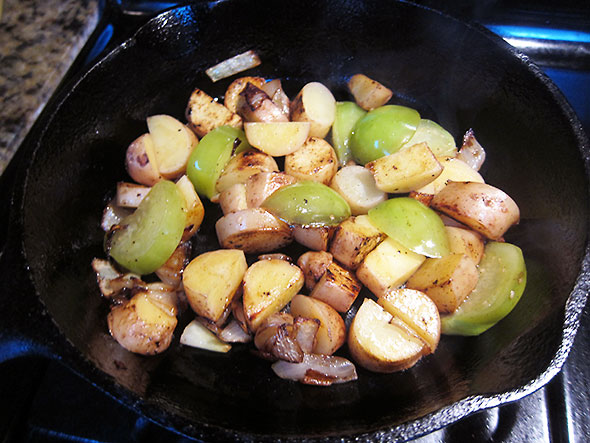 During the relentless hot weather we experienced last summer, potatoes were off the menu. Smaller Footprint Farm supplied us with bags and bags that I stored for fall and winter. I planted the sprouting leftovers. I suspect I’ll have fewer leftovers this year, so for the next planting I will chop my seed potatoes into wedges and spread the wealth. 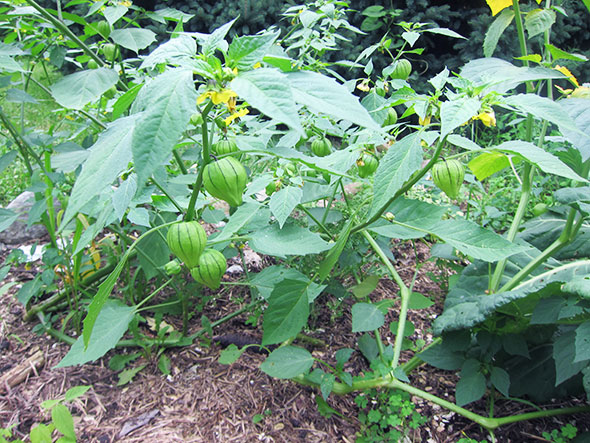 Last fall, I also threw out some overripe tomatillos which have flourished in the garden. I didn’t really expect them to propagate but, considering the amount of seeds the fruit produces in one slice of tomatillo, I should not have been so surprised. I was most fortunate in that several plants took root as tomatillos need pollination buddies. The plants loaded up with blossoms and, most recently, beautiful blue-striped lanterns which house developing green orbs. The fruit will mature in another month or so, and until then I must ensure each plant get an inch and a half of water so that its fruit plumps up good. A single plant can produce as much as 10 pounds of tomatillos. I’ll need to get out there soon and stake the vines so that they can carry the accumulating load. 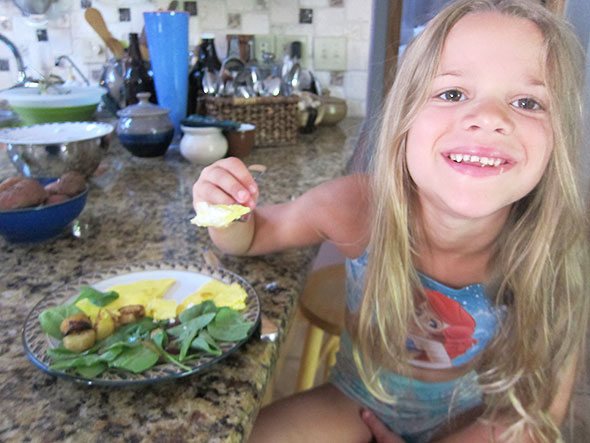 The breakfast potatoes rounded out a hearty breakfast for my daughter and me. In just the two last weeks, she has swum her first laps across Gaunt Pool learning freestyle, breaststroke, backstroke, and—her favorite—butterfly. As a Yellow Springs Sea Dog, our daughter needs a good store of energy to make those multiple passes. Cheerios is not cutting it. For our swimmer and—as she reminds me—future professional cheerleader, egg, potato, and a pile of spinach is just the thing.