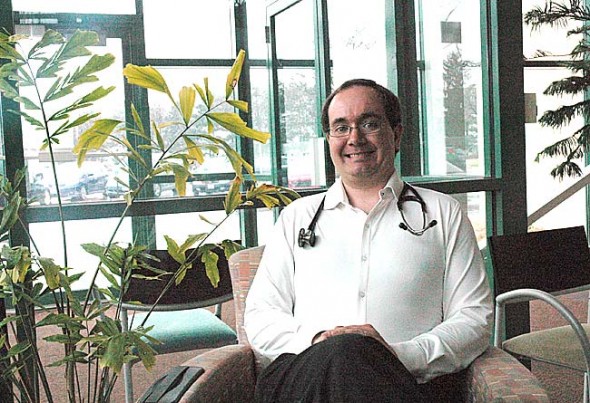 A new family medical practice is set to open at the former Creative Memories building now owned by Yellow Springs, LLC. Donald Gronbeck, a 2002 Antioch College graduate, hopes to start his first practice, Yellow Springs Primary Care, the first week of May at the south edge of the building fronting on Dayton Street.

The 1,800-square-foot clinic space is currently being remodeled by the building owners, who hope to have a grand opening for the medical office on May 4. But they need to change the zoning of the 10-acre property in order to allow medical offices and multiple tenants not currently permitted in the industrial district.

Village Planning Commission will hold a public hearing on the matter on Wednesday, April 16, at 7 p.m. at the Bryan Center. The planner’s recommendation will then need approval by Village Council, which will meet at the regular time on Monday, April 21, at 7 p.m. in Council chambers.

Gronbeck has known for some time that he wanted to return to Yellow Springs to open a practice. He lived here while attending Wright State Medical School and served on the Miami Township Fire-Rescue squad. He moved to Columbus and completed his residency at Grant Medical Center last month and has been looking for a potential office space in town for about a year. Gronbeck initially found no existing space that was practical for a physician’s office, and he didn’t inquire with the three existing medical practices because he wanted to be independent of the larger corporations that own them. So he began looking in Columbus, Xenia and the Dayton area, and found many options, he said.

Still, his dream was to be back in Yellow Springs, and when he heard the LLC had purchased the building on Dayton Street, he approached the group about remodeling for a doctor’s office. The LLC was amenable.

The property owners purchased the building from Creative Memories in November because they thought it had potential to bring new tenants and function as a multi-use facility, according to Josef Bobek, the California real estate attorney who manages Yellow Springs, LLC, a group (of unknown size) of investors located in California and around the country. And they intend to continue to remodel the 60,000 square feet of available space to accommodate more professional offices and potentially one light production purpose.

If the zoning permit is issued, Gronbeck will be the first new tentant to occupy the building since e-Health Data Solutions and Antioch University moved in in 2011 and 2012. While those uses, which include professional offices and multiple tenants, are noncomforming to the new zoning code adopted last year, the pending zoning change would help to bring the current building use in line with code, according to Village Planning Administrator Tamara Ennist this week.

Gronbeck intends for his practice to include everything from children to elderly patients with a focus on wellness care, including osteopathic manipulation, ultrasound testing, small surgical procedures, and limited lab testing. He believes that wellness is best acheived in a place such as Yellow Springs, which supports the whole person, including access to healthy food and strong community ties — things that make his job as a physician easier, he said.

Americans are headed down the wrong road in terms of diet, obesity rates and diabetes, according to Gronbeck. “To promote good health you need homegrown foods, exercise, knowing your neighbors — it’s a whole package of health,” he said.

Many of those elements of healthy living can be found in Yellow Springs, which is partly why Gronbeck is returning to the area this month and hopes to eventually move back to town himself, perhaps rejoining his local Wednesday night bridge group.

“I appreciate Yellow Springs — we do things differently than most of the surrounding neighbors,” he said. “That’s why I lived there, that’s why I’ve missed it, and that’s why I want to come back.”