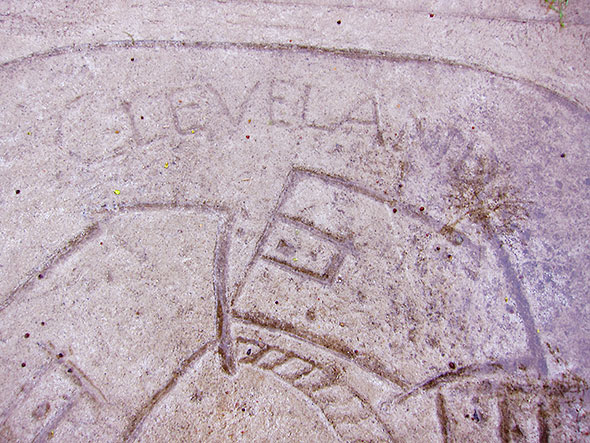 Wednesday took me on a day trip to Cleveland. I set off at 6am in a misting rain to drive 198 miles. Before leaving the house, I was nervous about driving north by myself even though I had done so many times before. Just before my 24th birthday, I drove my little Dodge hatchback 3000 miles from the rolling hills of Nichols NY to the Hollywood hills of Los Angeles CA to take up an assignment at Los Angeles Air Force Base. Three years later, the Dodge took me back across the United States 2500 miles to Wright Patterson Air Force Base. In those cross-country trips, I ran that workhorse of a car 10 to 12 hour each day so that I had time enroute to linger in Colorado with my sister Heidi. When I got my current Honda 15 years ago, I took so many long distance trips in its first twelve months that I put 30,000 miles on the odometer. Since then, however, I’ve experienced a growing reluctance to leave home, delaying some trips, canceling others. In part, my unease was a reaction to the terrorist attacks of 2001 and 2002, but I can trace back the roots of my anxiety to my youth where, as a tiny child, crossing a bridge would horrify enough to find me tunneling deeply into my mother’s shoulder. 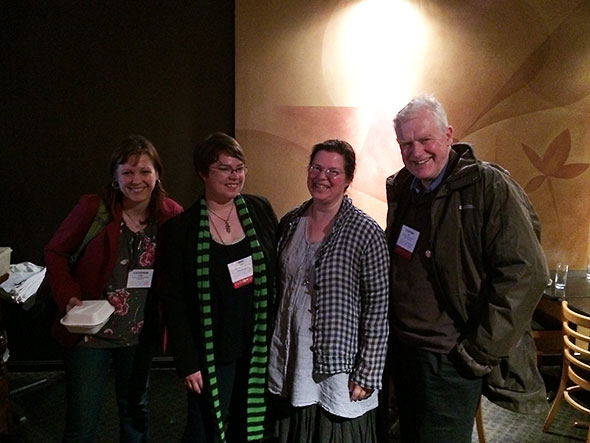 The curious thing though is that I can hardly imagine a finer adventure once I’ve started a road trip. A car is after all a snug cocoon for someone with agoraphobia, and how much fun is it to emerge from its close confines into the Oz-like landscape of an entirely different world. At the end of Wednesday morning’s rain-studded journey, that world was a sun-lit pier on Lake Erie which was hosting a conference of passionate activists, the 2014 National Conference of the National Community Land Trust Network.

I was attending the final day of conference at the invitation of Emily Seibel, the Executive Director of Yellow Springs Home, Inc. As a new member to the organization’s board, I was there to learn and also to lend my moral support to the able Seibel who gave her first talk at the National Conference. Unphased in her inaugural run, Emily took charge of her session like a pro. She introduced her four fellow presenters and lead the assembled experts and audience in discussion. Our topic covered the common goals and distinct characteristics of Community Development Corporations (CDCs) and Community Land Trusts (CLTs). People tend to associate CDCs with cool real estate markets especially those suffering high foreclosure rates and low occupancy rates. Community Land Trusts such as Yellow Springs Home, Inc., are often associated with securing affordable housing in hot markets. However, the panel encouraged us to throw off distinctions based on a service areas’ real estate appeal. The panel members embraced applying the two models to a range of situations…noting how well both promote solutions designed for and by the community and without the over-reaching interference of outside interests.

The main distinction that I found was in the temporal arc of the mission: generational versus multi-generational. Land Trusts preserve community resources and hard-won locally-designed solutions over multiple generations. While development organizations may reign in their ambitions over time, Lashawn Hoffman—Chief Executive Officer of the Pittsburgh Community Improvement Association, Inc.—touted the strengths borne out of a broad mission base that addresses not just housing but also safety, security, health, and economic challenges. Taken in sum, these community initiatives add powerful momentum to the cause of neighborhood self-determination and stabilization. Advocating for increased collaborations between trusts and development corporations, Emily Seibel hit home the message that land trusts sustain community development through long term stewardship…keenly focusing on home asset management, homeowner success, and preservation of the invested public subsidy. 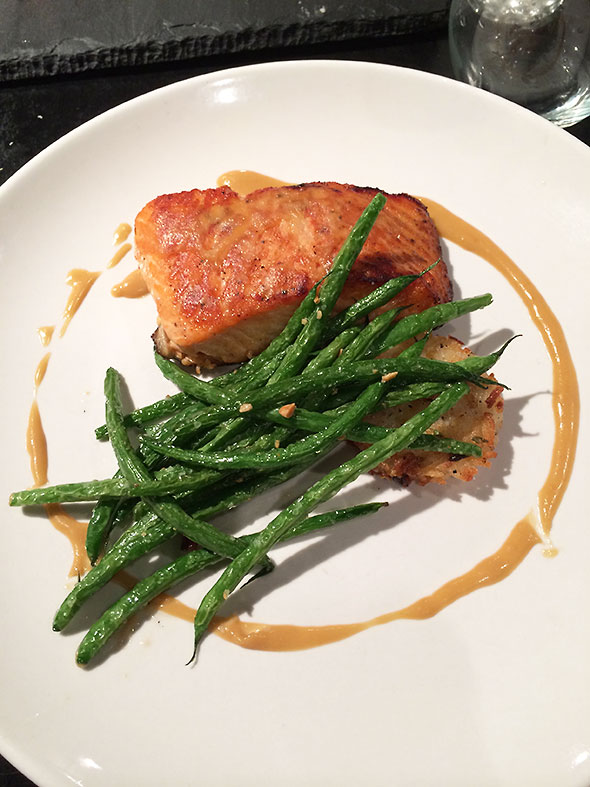 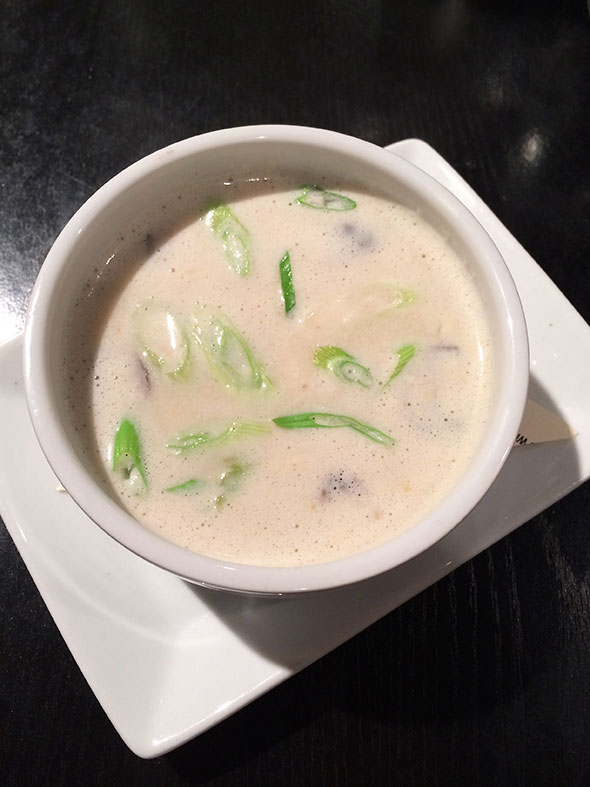 In addition to the discussions led by Emily Seibel and company, I also attended a morning session on Urban Agriculture. Expecting to find inspiration relevant to the farming community and green spaces of the Miami Township, I was surprised to discover how much agriculture is an integral part of urban revitalization efforts. I knew from my three years in Los Angeles that a community is more safe, more vibrant, more livable when people are outside enjoying the neighborhood. Restaurants, parks, playgrounds, bike paths and—yes—community gardens mixed in with residential housing promote constant foot traffic at all hours of the day and night. Instead of crowding housing developments seamlessly together, thoughtfully-designed communities seek diversity in their spaces as well as their populations. Cities take care to fill in even the odd nooks and crannies to ensure a continuous dedication to positive employment and enjoyment and a stalwart deterrence against trouble moving in.

Urban agriculture came up at lunch and again in the afternoon tours of Cleveland’s affordable housing projects in the west side Ecovillage. Lunch was taken at the Flying Fig, a farm-to-table restaurant with a magnificent reputation and a seasonal menu that served vegetables raised at urban farms supported by the local community development organization. 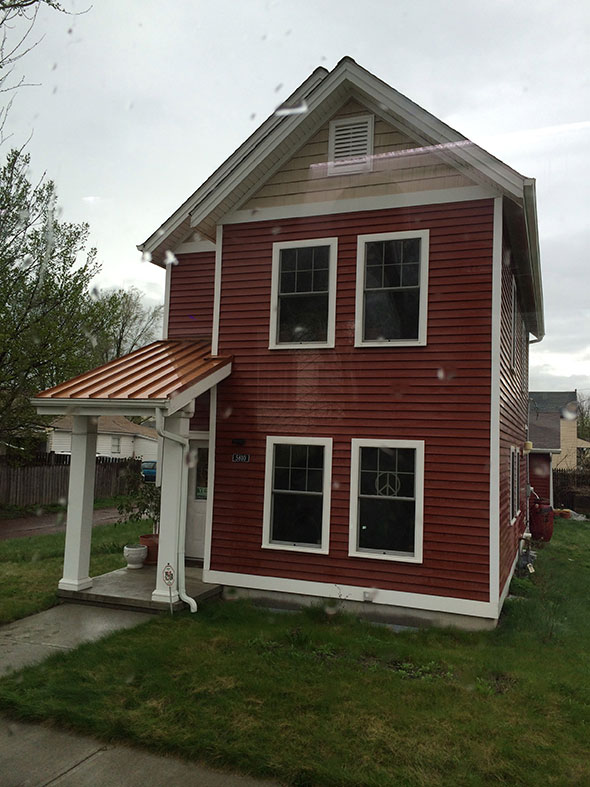 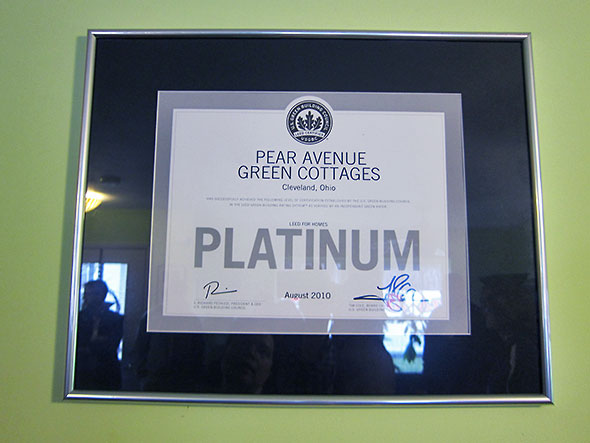 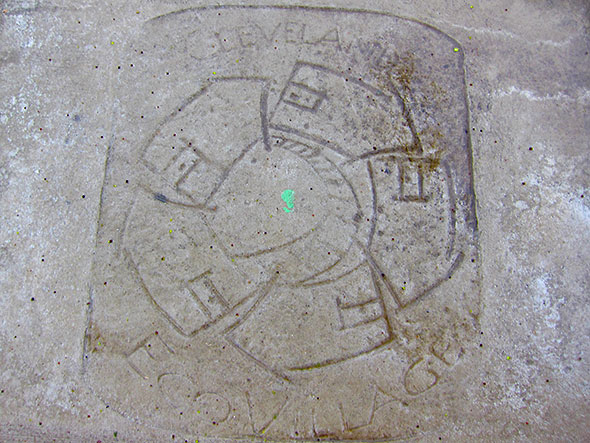 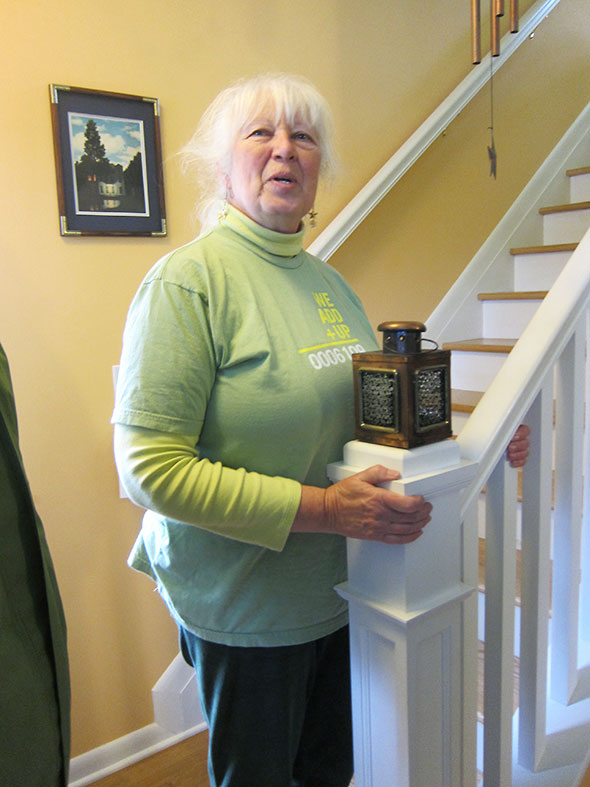 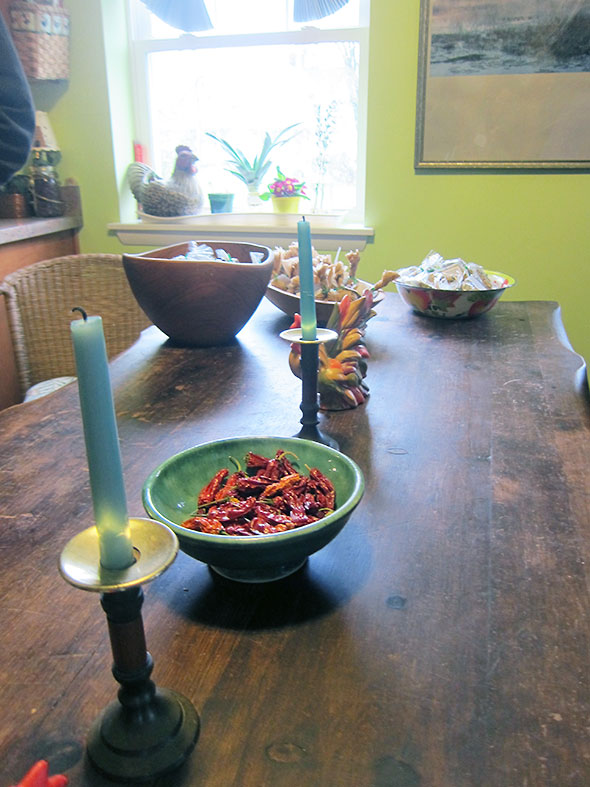 After lunch, we got a tour organized by the conference host, the Neighborhood Housing Services Greater Cleveland. We saw two distinctive housing projects—one single family home and an 4-unit apartment building—both focused on long term affordability and energy-efficient construction. The single family home on Peach Street was the pride and joy of its owner, a local advocate of green living. The newly constructed house earned a Platinum LEED certification which means it achieves best-in-class distinction in home construction under Leadership in Energy & Environmental Design guidelines. Every wall cavity is a six-sided sealed box, and the entire house is seal-wrapped under its siding. The home’s appliances are all energy star rated. Following these best practices in green building, the home uses an estimated 63% less energy than the typical new American home. 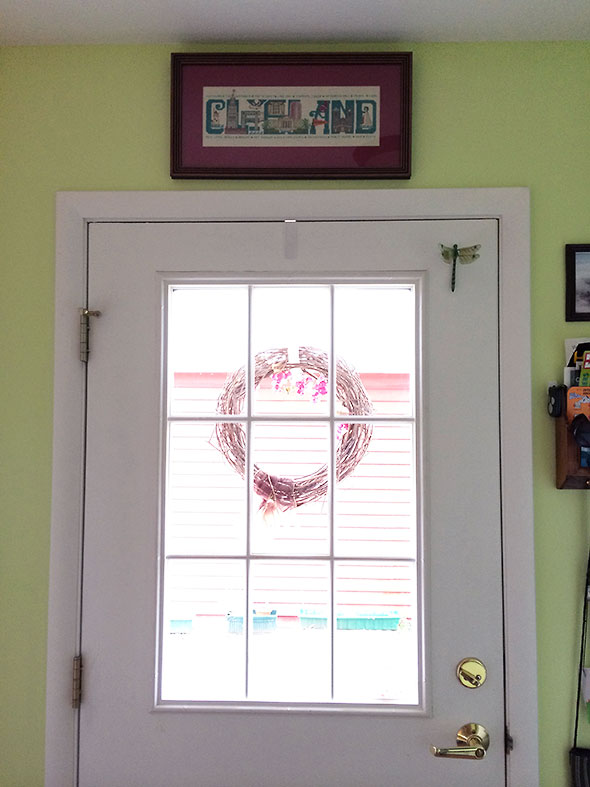 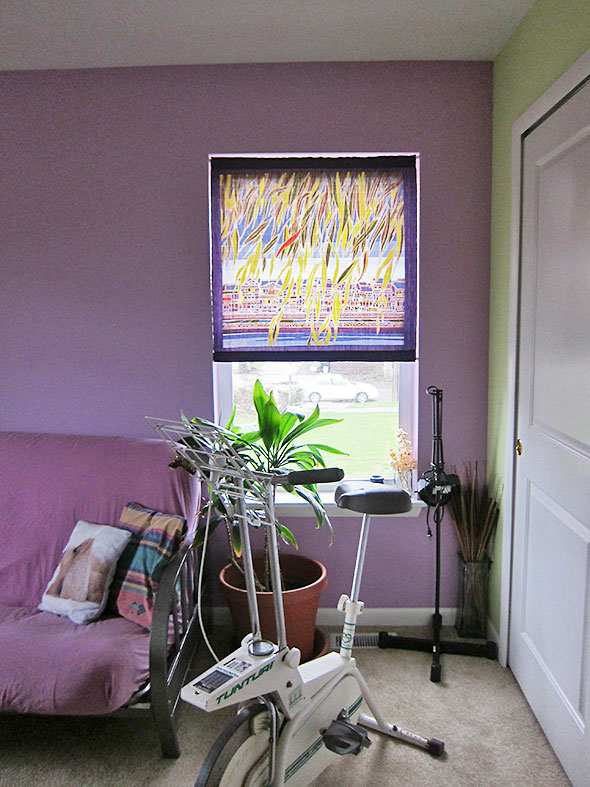 The present owner was in on the construction and had input into the open floor plan, material choices, and the spring-themed color scheme throughout the house. Despite repainting our own home recently, I was tempted to ask her what shades of green and purple that she had picked for the interior walls. Her choices—the vibrant apple green and gorgeous violet—hummed with optimistic energy. 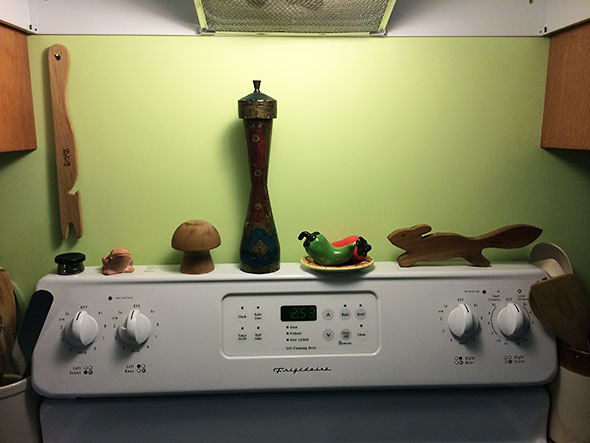 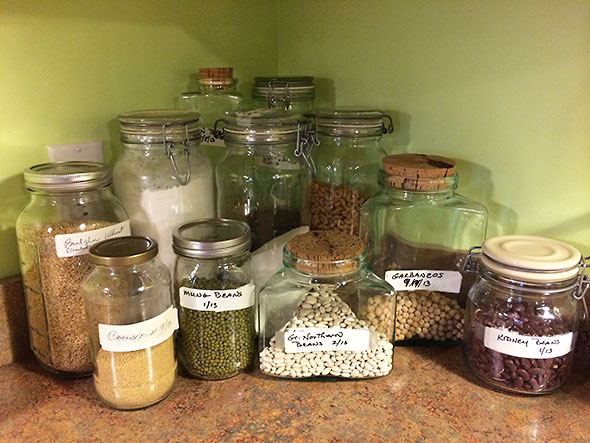 As a special treat, she offered her touring guest bowls of individually wrapped snacks as we left. I chose a goo ball which, to my amusement, reminded me of a seed-covered peanut-butter-coated bird feeder when I unwrapped it. Gamely, I bit in and must admit that I was a happy robin content with my satisfying treat. 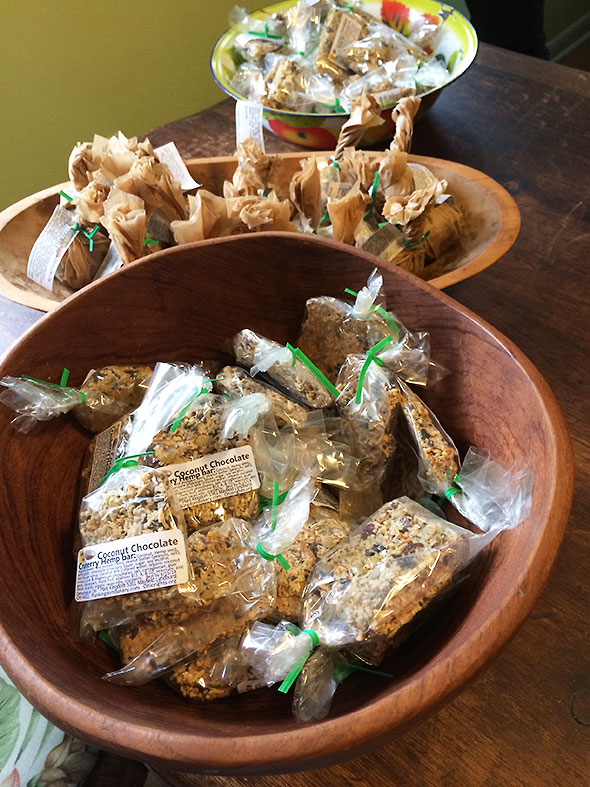 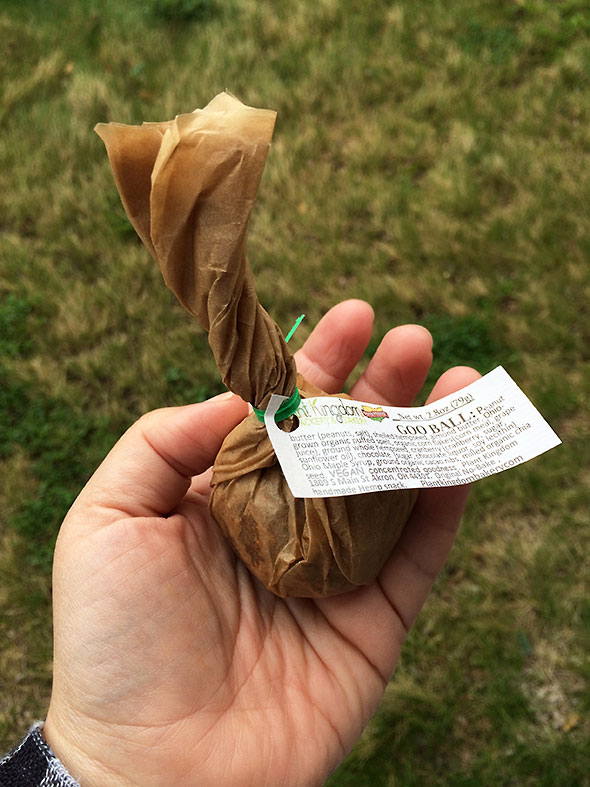 Though we could not go inside the 4-unit apartment project that we visited next, we were able to talk with the builder who took on the challenge of refurbishing the 1890s historic building to surprising success. He had found space between the brick exterior and the supporting studs of the interior walls which allowed for an unbroken barrier of foam insulation to be added. We also heard from the local congressman who help rezone the neighboring community garden just across an alley from the apartment building. Sharing a long storied history, the two properties are seen as joint assets. The garden is an enticement for prospective families and also a long-established neighborhood watch post. 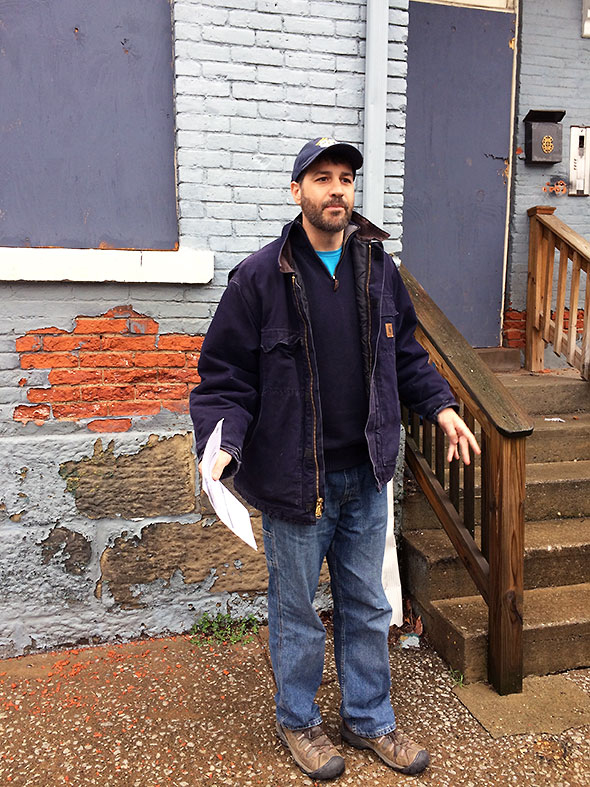 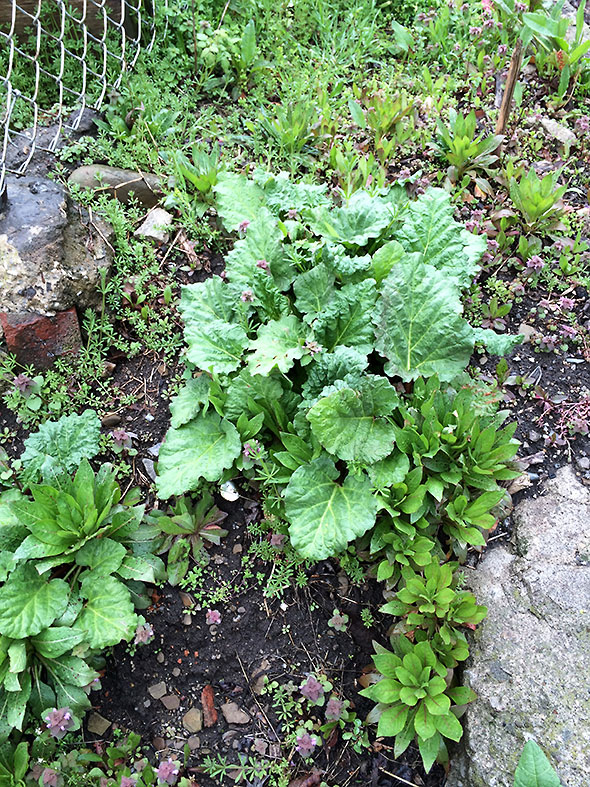 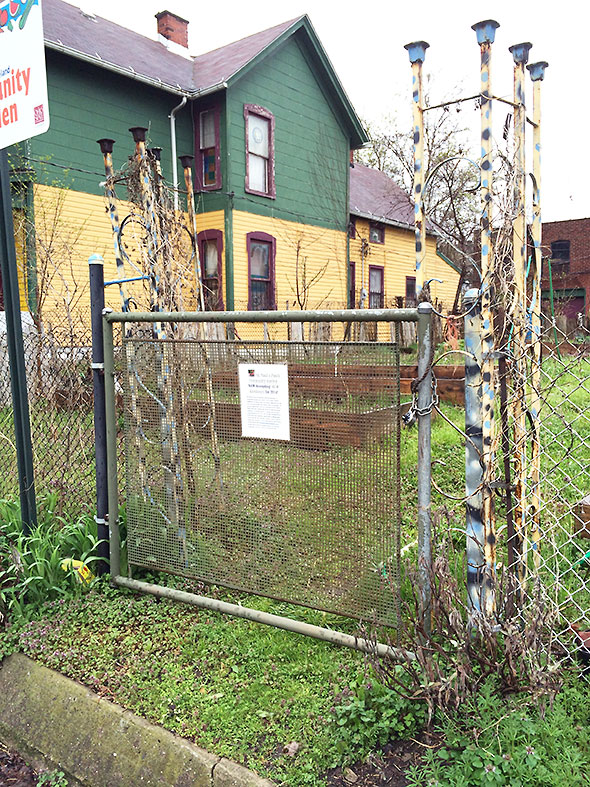 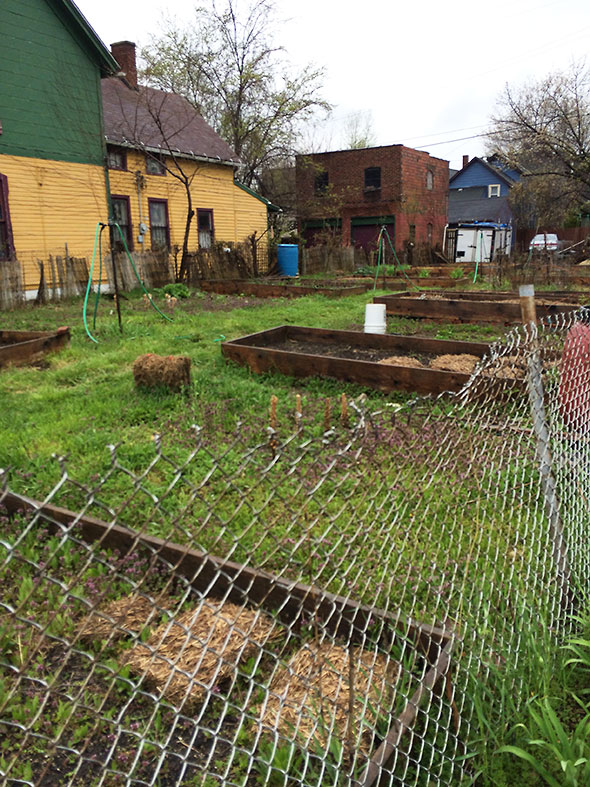 The garden’s long history is chronicled in part by the rich collection of volunteer plants on its borders. I see rhubarb, iris, and lily among others. The tended beds date back as far as its sister building proceeding the victory gardens of World War I and II. At a recent point of low maintenance, the garden was almost paved over for parking spaces during a gentrification push. However, the Saint Paul Church acrossed the street adopted the garden and stepped in to prevent the garden’s destruction. With the help of the congressman, they requested that the city zone the undersized plot officially as an urban garden and recognize its current employment as the best use of the property. As the very first plot in Ohio to be assigned this zoning classification, the small raised-bed garden blazed the path forward for urban agriculture in the city of Cleveland, and the local ordinance now allows commercial agriculture—including some livestock—within the city limits. 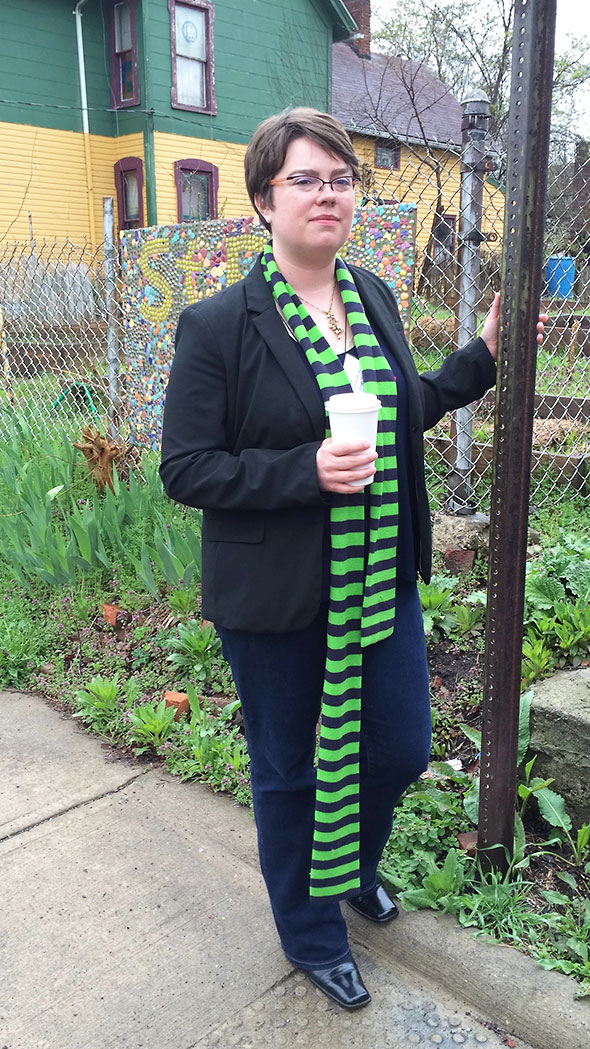 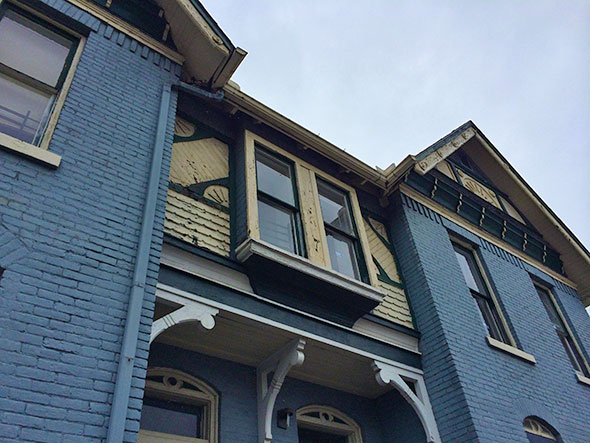 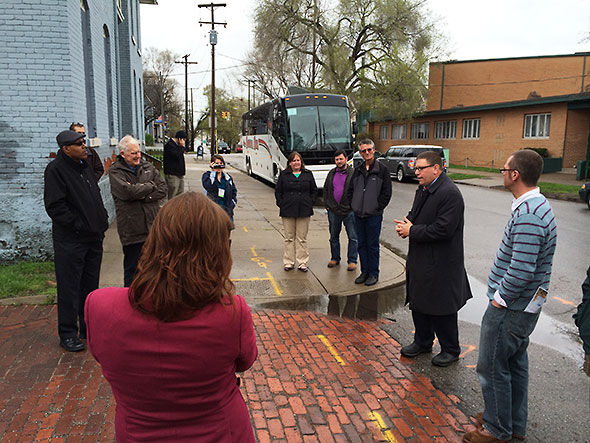 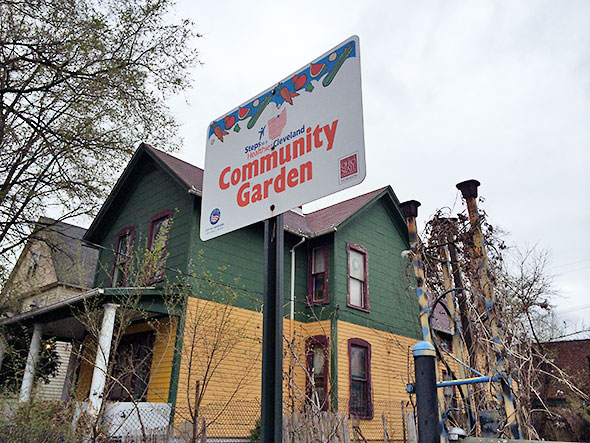 Our tour continued as local activist and Ohio City resident Piet van Lier walked us down the street to his own house discussing the private and land trust projects on the street along the way. Through his storytelling and our own eyes, we could see the ongoing struggle that stewardship projects face keeping up with the dynamic forces of weather, industry and economics, and pure human drama. The rise and waning ebb was evident as we progressed along the half mile stretch that we walked witnessing the common community values on display in the presence of gardens, play areas, rain barrels and other green practices, and richly detailed historical facades, some in decay but many others lovingly maintained. 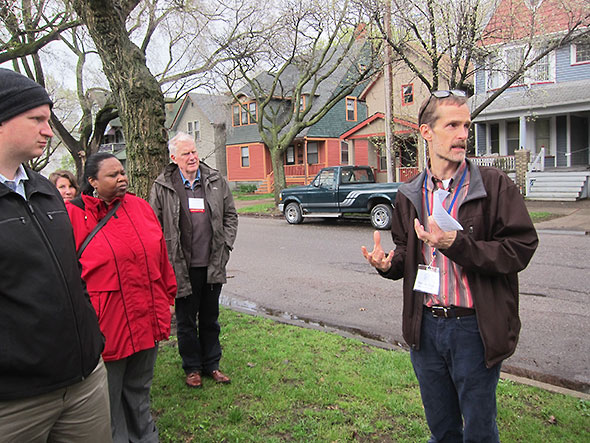 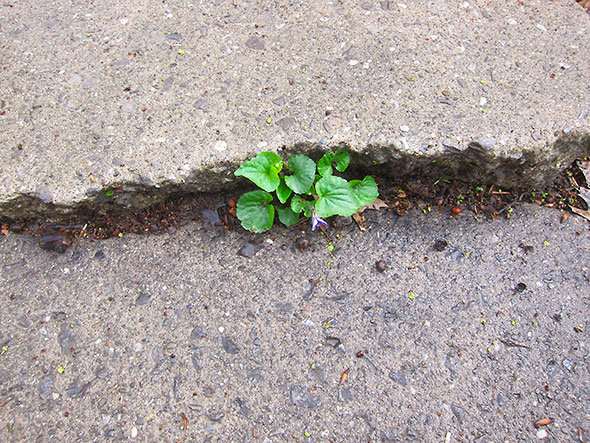 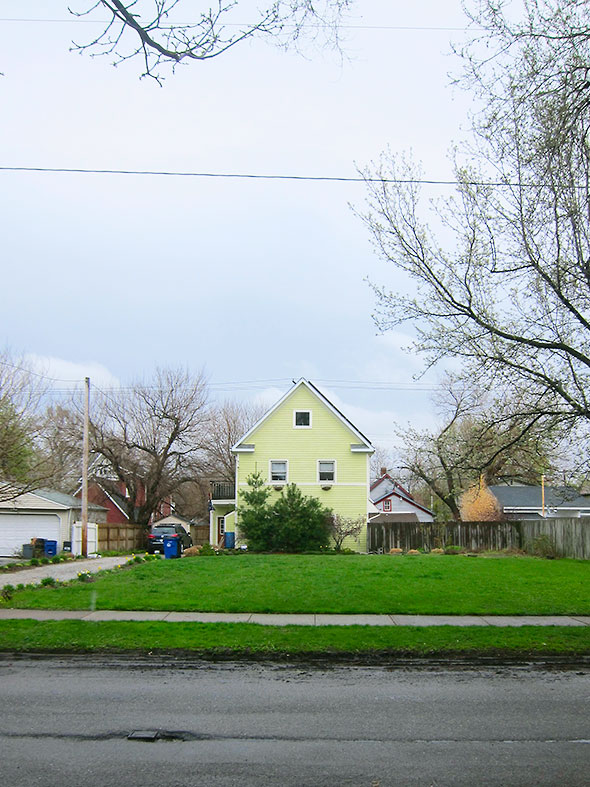 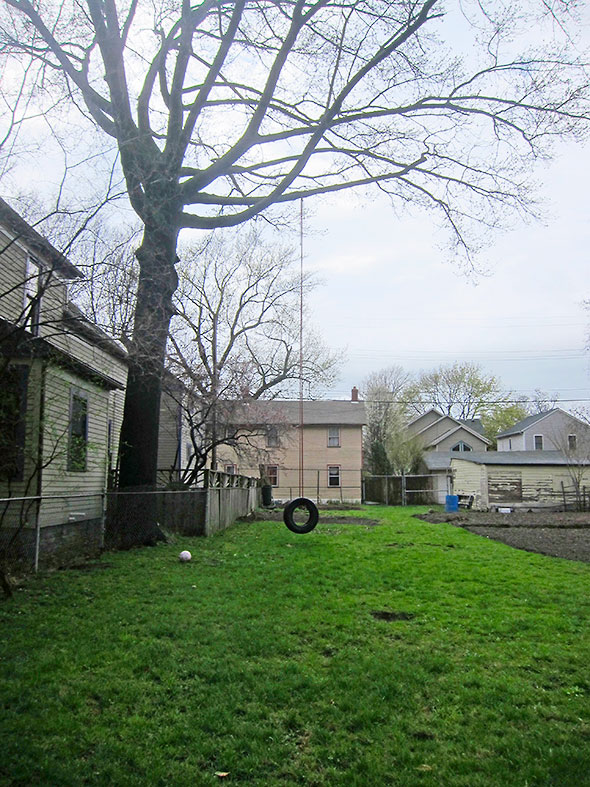 We returned to the conference center after our tour, and I drove home energized by conference’s optimism, its participant’s innovative mindset and resolve. The miles flew away under my wheels as I thought about the counsel that I had gained through the day’s discussions. Much had jived with my own life experiences within the diverse communities that have taken me in over the years, each one of them ebbing and flowing like tide water between triumph and decline. I had learned that day how benign neglect is not an option: An awakened presence is necessary, and stewardship is rooted to the land, the soil under our feet, and embedded under our fingernails.