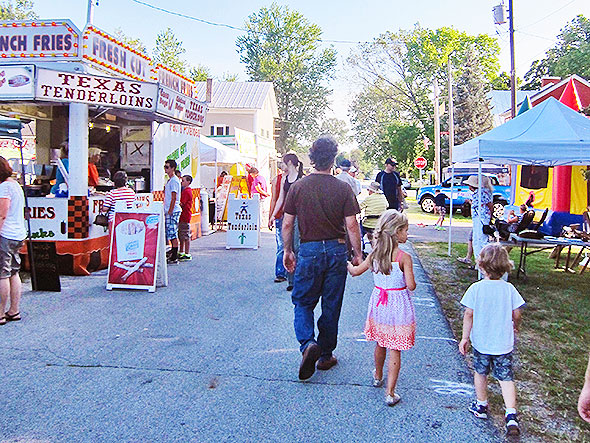 BLOG-Family Fun At the Clifton Gorge Music and Arts Festival

Friday afternoon, my husband Jeremy left a message that he was leaving for home with our four year old just as my daughter and I wrapped up our weekly music lesson in Clifton, Ohio. I listened with interest to his offer to grill pork burgers for dinner, but my daughter was already hooting in the backseat caught in the throes of a more ambitious idea.

Earlier, my daughter and I had passed through the heart of Clifton—at the intersection of Routes OH-72 and OH-343—and found it awash in tents and the smoky aroma of festival food. The village was in its final hour of preparation for the 2014 Clifton Gorge Music and Arts Festival, and my daughter was all for hitting the gates of its 4pm opening. Though I knew her father could be easily persuaded to join us directly, I doubted my violin would like an evening spent in the back of my car. We whisked the instrument home and positioned ourselves to waylay any home cooking plans. 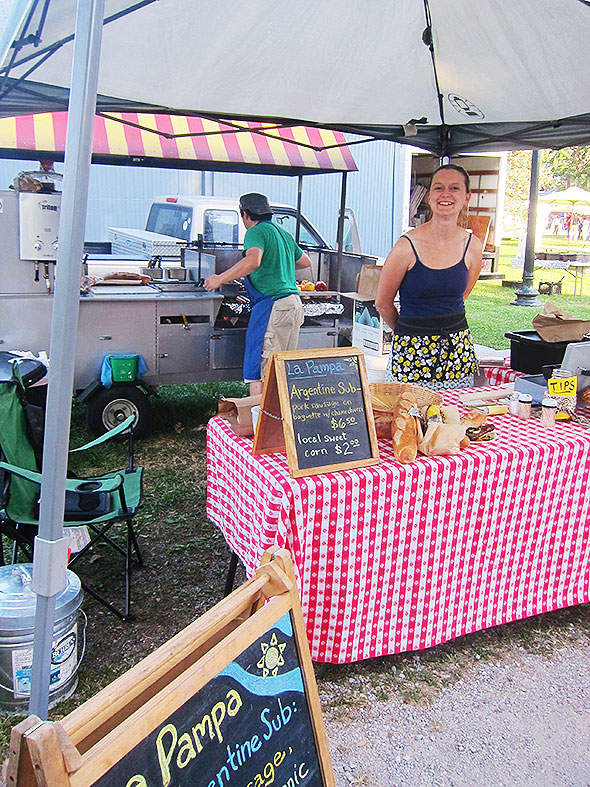 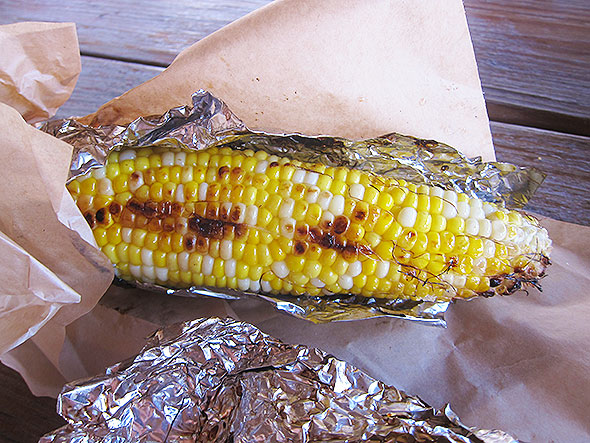 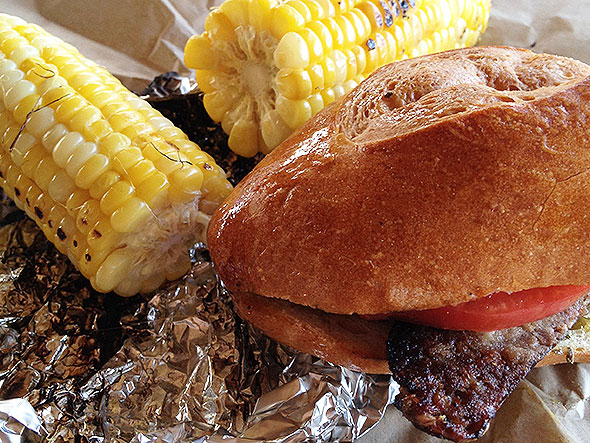 We were back at the festival within the hour following our noses to our evening meal. We hit gold right away. Next to the music pavilion at the center of the festival, we found Mariano and Luisa Rios of La Pampa Grill caramelizing bright orange and yellow peppers, pork sausage, and corn on the cob. We ordered an ear of corn for each family member and a sandwich for the adults. 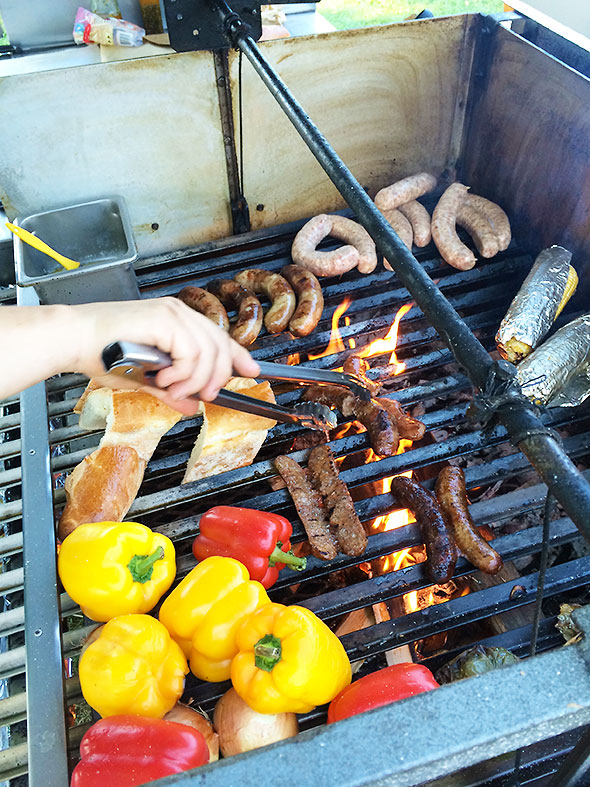 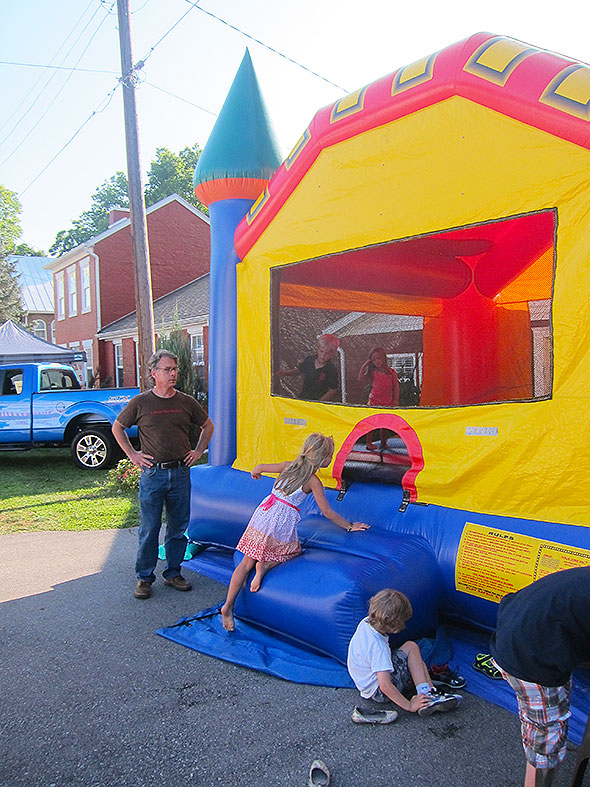 I stood by the grill watching the pork sizzle and pop as our order cooked. The rest of the family bounded over to a castle-shaped bouncy house and were soon hopping about like grease on a griddle. 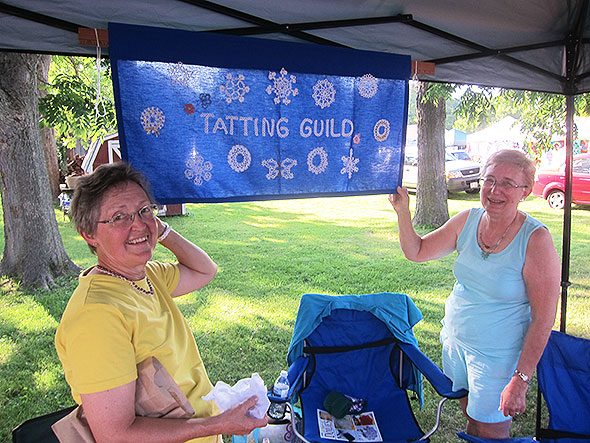 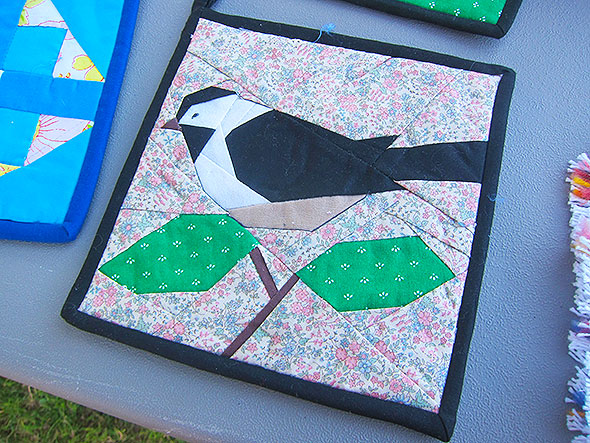 I lured the kids out of the bouncy house to the picnic tables of the music pavilion with piping hot cobs of buttered corn. To my surprise, they pounced on the pork sausage sandwich first. Pulling apart the sandwich into its elements, they ate the peppery chorizo sausage and the crusty, local-baked bread sopped with chimichurri sauce. They consumed my sandwich in its entirety, and I had cued up again to taste one for myself. 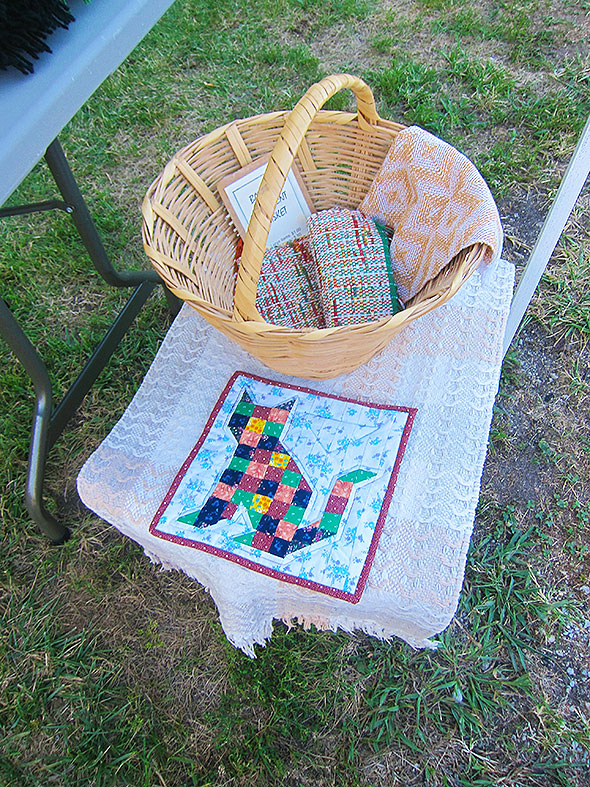 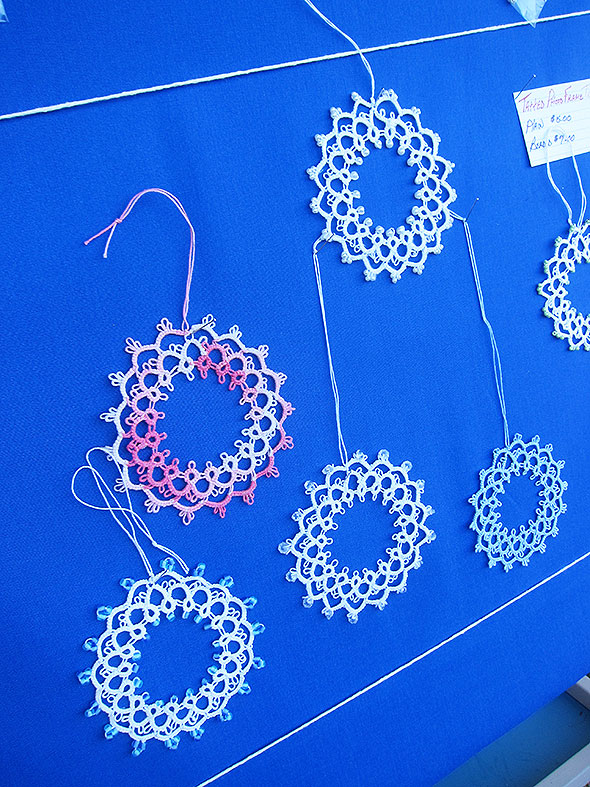 While I waited for a second time, I took in the neighboring craft vendors. I peaked in at the weaving tent and lingered among the quilters especially enjoying the squares depicting birds and cats. Drawn by the snowflake-like frames laced with dewy glass beads, I spoke at length with Anne Segrest of the Tatting Guild. She told me of her outreach teaching tatting at local crafts stores and at workshops as far away as Virginia. Clearly an enthusiastic, knowledgeable ambassador for the art form, she sketched out an evocative history of tatting: how fine and strong the threads needed to be—as fine and strong as human hair—to achieve a strip of elaborate lace. The guild uses thicker threads now but the same patterns drawn from French, German, and Italian traditions. 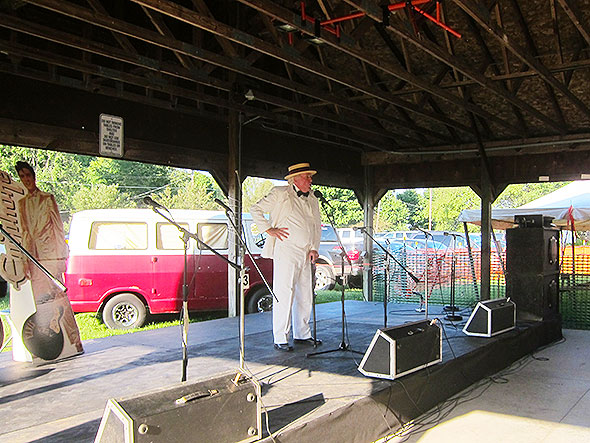 I collected my sandwich and joined the family as a representative of the Ohio Chautauqua Tour took the stage. Dressed in the summer clothes of a early 1900s business man—white suit, straw hat, and bow tie—he introduced himself as Thomas Edison, the inventor of the phonograph, movie camera, and lightbulb. He quizzed the crowd on points of his history. A respectable number of answers were the state of Ohio—where he was born, where his second wife was born—though the crowd was scolded for not knowing Menlo Park, New Jersey as the site of his first successful experiments with carbon filaments. He took the crowd to task again when he asked what hand in poker was the best. He gave the woman in the front row—who gamely answered, “A royal flush”—a shocked looked and admonished her that the correct answer was, “I’m sorry, Mr. Edison, but I do NOT play poker!” 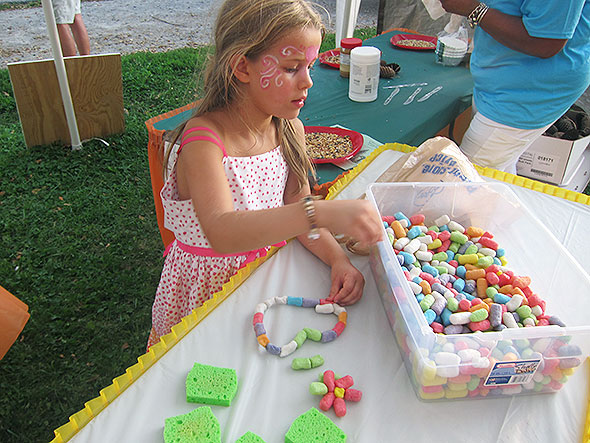 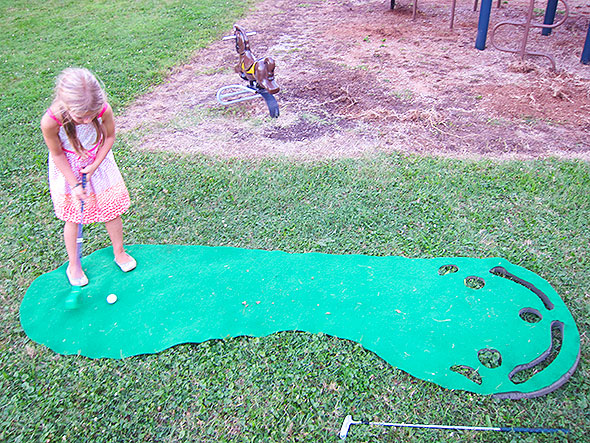 After dinner and a scoop of vanilla from the Clifton School House ice cream social, my daughter enjoyed an evening of invention at the children’s craft table. Her face painted with a central heart and wistful swirls of pink and white, she made a bird feeder from a pinecone, seeds, and peanut butter then a heart-shaped trivet from multicolor packing noodles that stick together when damp. 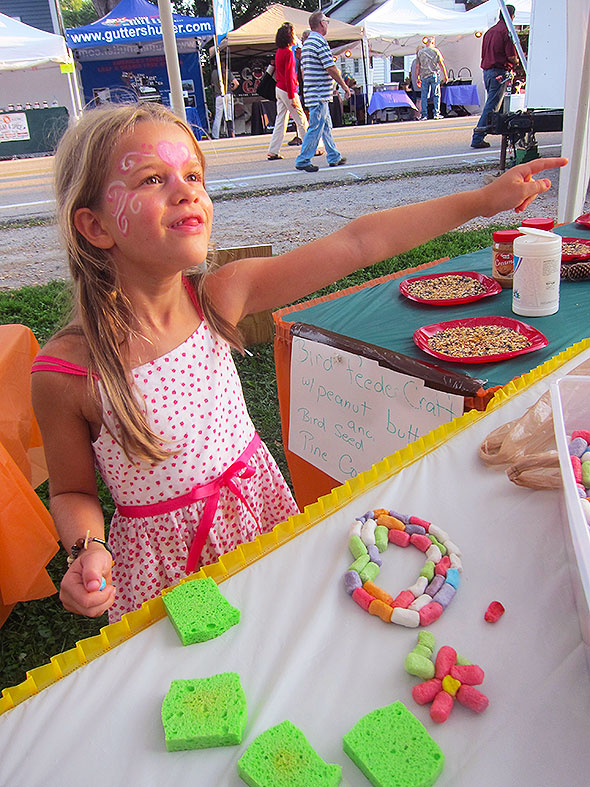 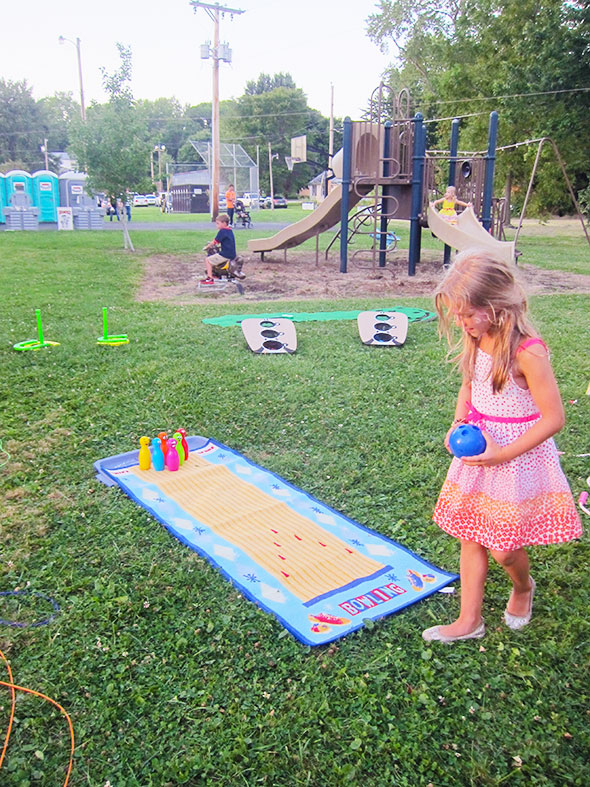 Our son raced about the school house playground until he was ready to topple over. Our daughter paced herself with greater discipline and rounded out her stay rolling a spare at bowling, tapping a golfball into the pocket of a sole-shaped green, and playing a competitive round of oversized horseshoes. For her efforts completing all stations at the children’s tent, she left the craft table with a special prize: a kite adorned with a rather content looking kitten. [The family is off to Gaunt Park to fly the kite as I write.] 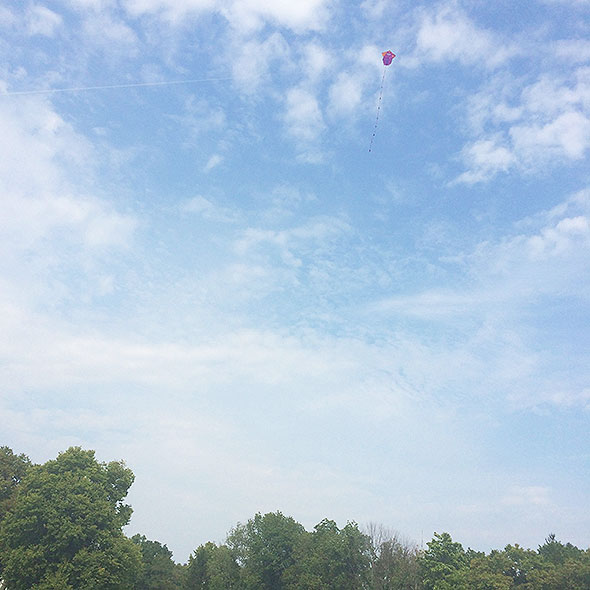 The annual Clifton festival runs Friday through Saturday night Labor Day weekend and has much to appeal to other generations. For our second grader, it was an especially terrific way to begin the holiday weekend.