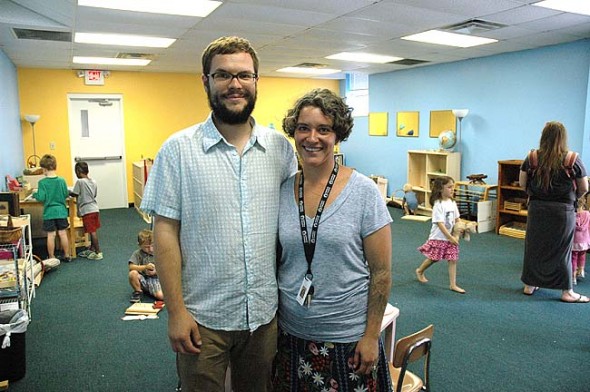 Edward and Melanie Ricart started the Yellow Springs Children’s Montessori Cooperative three years ago, which this fall moved into the Sontag-Fels building at Antioch College. There are 19 students between ages 2 and a half to 6 in the program, which is currently full but open to observations and waiting list additions. (Photo by Megan Bachman)

Children get a choice at Montessori school

It’s a school without teachers, a place where the children teach themselves.

What sounds radical is a concept developed by Dr. Maria Montessori more than 100 years ago and now in use in more than 7,000 schools around the world.

At the village’s second Montessori program for young children, the methods may be unorthodox, but they are said to fit with how children naturally learn and develop.

Walk into the Children’s Montessori Cooperative, which moved this year from a private home to the Sontag-Fels building at Antioch College, and children aren’t sitting in rows listening to a teacher or watching a video; they are scattered on floor rugs working independently.

Classrooms are multi-age, learning is sensorial and activities aren’t timed. One student is fitting puzzle shapes of states into a U.S. map. Another is practicing how to write cursive. Another is using a lock and key. Another is learning about the seven continents.

Students also prepare and serve their own snacks, do their own dishes and take care of one another in what school co-founder Melanie Ricart called “a community of their own.”

“We are looking at it as this is the children’s space,” Ricart said. “So we’re working with them to help them build a community of their own.”

Ricart and her husband Edward Ricart, who founded the program for preschool and school-age children three years ago, view themselves more as facilitators or guides who “follow the child” and help them do the work themselves.

“We are facilitating their experience and guiding them to learn on their own,” Ricart said. “I’m always observing why something is or isn’t working.”

The Children’s Montessori Cooperative now has 19 students from 2-and-a-half to 6 years old, with both full and part-time spots. This year it is also officially licensed as a commercial childcare center by the Ohio Department of Job and Family Services, with the space to potentially accommodate up to 27 students.

Though the school is full for this year, interested parents can call to find out about openings and also to observe a school day and get on a waiting list for 2015.

The Yellow Springs Montessori School at the Presbyterian Church, started by a group of local parents in 2009, is a three-day weekly program focused on children ages 2 and a half to 6, while Children’s Montessori Cooperative runs five days a week and also includes kindergarten and first grade, Ricart said of the differences between the two.

According to the website of the International Montessori Index, a theme with young children is “help me do it by myself,” which is why Montessori education focuses on designing a “prepared environment” where children freely choose their own activities.

The walls of the Children’s Montessori Cooperative are lined with “developmentally-appropriate” work materials that are the centerpiece for student learning.

“A child can take anything off the shelf in a Montessori classroom and learn from it — that’s the beauty of Montessori,” Ricart said.

Through the materials children learn traditional subjects like reading, writing and math, and also develop social skills and a cultural worldview, Ricart explained. Students are currently learning, and practicing, concepts of grace and courtesy.

The materials, Ricart clarified, are not “toys” but aim to be as realistic as possible.

“Instead of offering ‘toys’ that [children] can pretend to do something with, we offer them the real thing and see what they do with it,” she explained. “The subtle difference is that they are learning productivity, and that gives them a feeling of independence and empowerment.”

In a sense, the “cooperative” in the program’s name refers to the way the children themselves take care of each other and the center, sharing tasks that range from napkin folding and snack preparation to pencil sharpening and plant watering, Ricart said. Parents are also part of the cooperative by participating in decisions about program changes and because the center works with each family to afford the program, Ricart said.

“We really enjoy the community we are building around Children’s Montessori Cooperative, and we want to continue to foster that by meeting the needs of our families,” Ricart said.

The Ricarts are the center’s only full-time facilitators, while Laura Pardo is a part-time and substitute facilitator who regularly teaches Spanish.

Melanie Ricart didn’t plan on starting a school or becoming a teacher, until, as a humanities graduate student, she walked into a Montessori classroom and “that changed everything.”

“I didn’t set out to teach,” Ricart said. “But when I walked in, it was amazing watching theses students exploring things that we as adults think they are not capable of doing.”

Edward Ricart fell in love with the multi-age classroom environment where older kids helping younger kids learn while reinforcing the skills in themselves. “I love to see the natural progression,” Edward Ricart said. A musician, he brings experience teaching introductory piano and guitar to young children. He also has a background in organizational leadership and is seeking a master’s in humanities with a focus on music.

The couple’s daughter, Ciaran, is one of the students at the school.

Dr. Montessori founded the education method in Italy in 1907 based upon her observation that children teach themselves, according to the International Montessori Index. A philosophy behind the method is that “each child is born with a unique potential to be revealed, rather than as a ‘blank slate’ waiting to be written upon,” according to the website.

“[Dr. Montessori] taught adults how to respect individual differences, and to emphasize social interaction and the education of the whole personality rather than the teaching of a specific body of knowledge,” the website added.