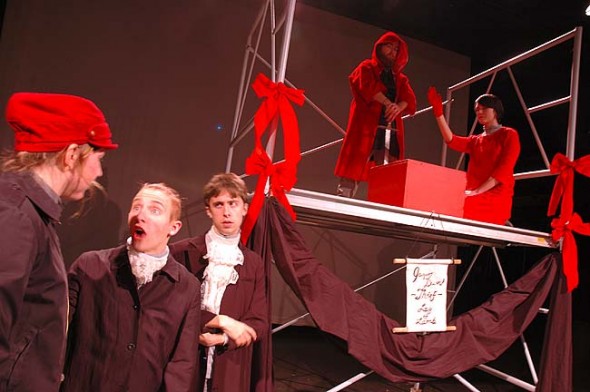 Antioch College presents “Softcops,” a surrealist look at state control and torture at the Foundry Theater at 8 p.m. Friday, Dec. 12, and Saturday, Dec. 13. It is the first faculty-directed play at the renovated theater. From left are Hannah Priscilla Craig, Cole Gentry, Sean Allen, Spencer Glazer and Alli King. (Photo by Megan Bachman)

The purpose of theater being to hold “the mirror up to nature,” in Hamlet’s dictum, the choice for the first faculty-directed play in Antioch College’s renovated Foundry Theater is fitting.

Though set in 19th century France, “Softcops’” exploration of totalitarianism and torture is highly relevant to the present discourse around police brutality, racism and oppression, according to director Louise Smith, Antioch associate professor of performance.

“It’s about how people are controlled by the state and how they internalize those systems of control,” Smith said.

Based upon the book “Discipline and Punish” by French philosopher Michel Foucault, the musical play is a surreal and darkly humorous look at the criminalization of subversive behavior, according to Smith. It traces the history of instruments of torture, from the guillotine to the contemporary experience of surveillance.

Seven Antioch students enrolled in Smith’s Rehearsal and Production course star in the show, along with another student on co-op. The play is performed in one act with a run time of 80 minutes.

According to Smith, students selected “Softcops” to perform to spark community conversation about a relevant topic, which is the greater purpose of the newly-renovated theater.

“This time and this place requires a discourse and what we want to do in this building is to create opportunities for the community to work through and process our present time in this place together,” Smith explained.

In the wake of several high-profile incidents of police officers who escaped prosecution for their role in the deaths of civilians, the play can offer insight on “the message that these non-indictments of police officers send to the citizenry in terms of who is in control of the discourse, whose life is meaningful and whose is not,” Smith said.

Smith is fond of Churchill’s style, which is influenced by Berthold Brecht in “using a lot of fakeness to get at the truth,” she said. Churchill also uses history in potent ways, while focusing on “showing the social mechanisms that create the choices that people make rather than making those choices seem inevitable.” The influential playwright is best known for “Topgirls,” “Cloud Nine” and “Serious Money.”

This production is especially significant for Smith, who returned to the performance department at Antioch this fall after chairing its theater department for 15 years before the college closed. (Smith has been the Dean of Community Life at the revived college since 2011). Smith previously directed Churchill’s “Mad Forest” at Antioch. She now returns for her first show at the college since “Support Our Troops” in 2008.

Even more momentous for Smith is the show’s staging in the renovated Foundry Theater. Smith trained in theater in the building as a student in the 1970s under Meredith Dallas and other faculty, and returned in 1994 to head the department. While Smith was a professor in the 1990s and early 2000s, the building was suffering from deferred maintenance — it was last renovated in 1955, she said. It’s renewal, and her return, are momentous.

“For me it is a story of return and renewal,” Smith said. “The way the building has been renewed is how I feel … It’s a real homecoming and a joyful one.”

The Foundry Theater opened for its first performance this fall. The theater was renovated for around $1 million, about half of which came from local donors (and $200,000 alone from the Yellow Springs Community Foundation), according to Jerome Borchers, a member of the new Antioch Area Theater Advisory Group. That group, which also includes Smith, Antioch associate professor of performance Gabrielle Civil, Valerie Blackwell-Truitt, Jo Frannye Reichert and Jane Baker, is acting as a liaison to the college to represent the community’s needs for the space. In early 2015, the group will present for community feedback a draft renter’s use contract that governs the costs and terms for community use of the space, according to Borchers.
Smith sees the importance of the new theater being welcoming to the community and acting as a cultural resource for the village. While the Foundry Theater is still a work-in-progress, it is now in a useable condition. More than that, its large unadorned “black box” set-up, which could eventually accommodate up to 250 people, is a unique opportunity.

“It’s a very unusual space for theater-making,” Smith said. “In most college civic auditoriums your imagination doesn’t go ‘wow,’ but when we walk in here we can see that anything is possible.”