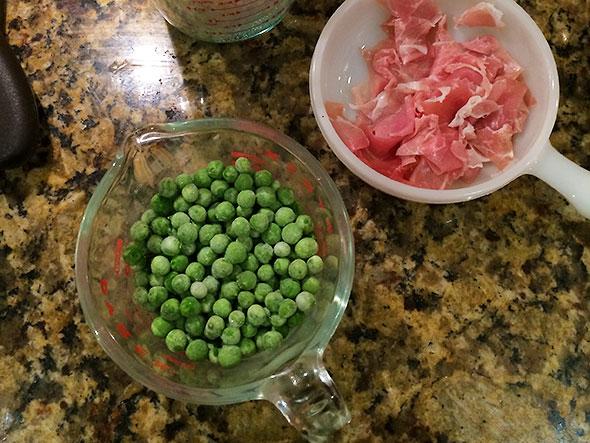 I had this thought before my oldest started elementary school that I would pack my children’s lunches. I had visions of bento box arrangements of vegetables, ham, and rice garnished with boiled eggs fashioned to resemble Hello Kitty or Totoro characters. I also planned to nurse my youngest for all of two and a half years before weaning him in the summer months before my daughter started school. 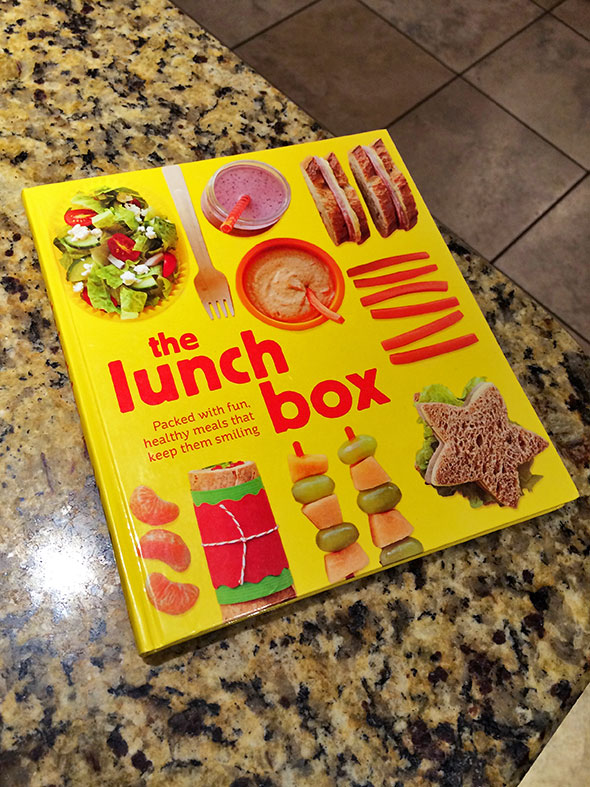 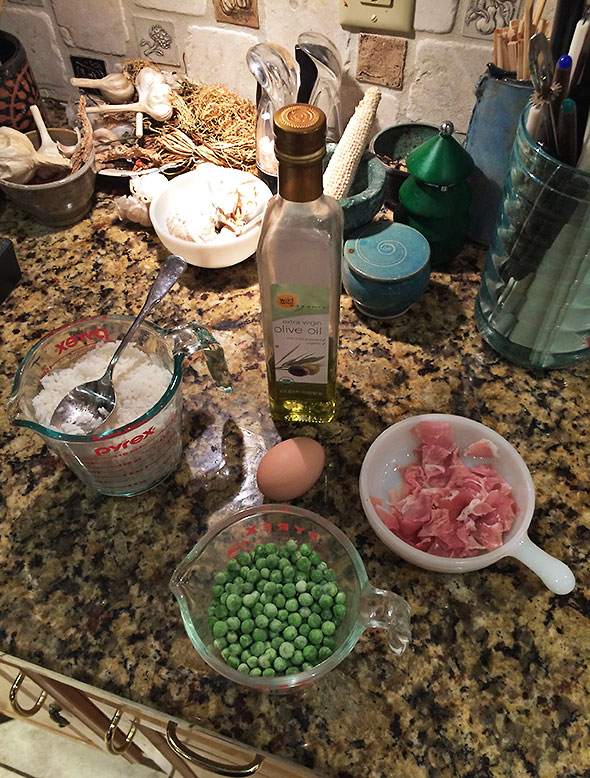 In practice, it was my husband who got up at 5:30am—pushed out of bed by a hungry toddler in search of First Breakfast—who packed our daughter’s lunch. The pattern set early stuck. So, even though my son has advanced to a first breakfast of english muffins and eggs dotted with catsup, my husband continues to rise first to assemble our daughter’s mid day meals. It was fitting therefore that my husband and not me received the playful book The Lunch Box in his Christmas stocking. 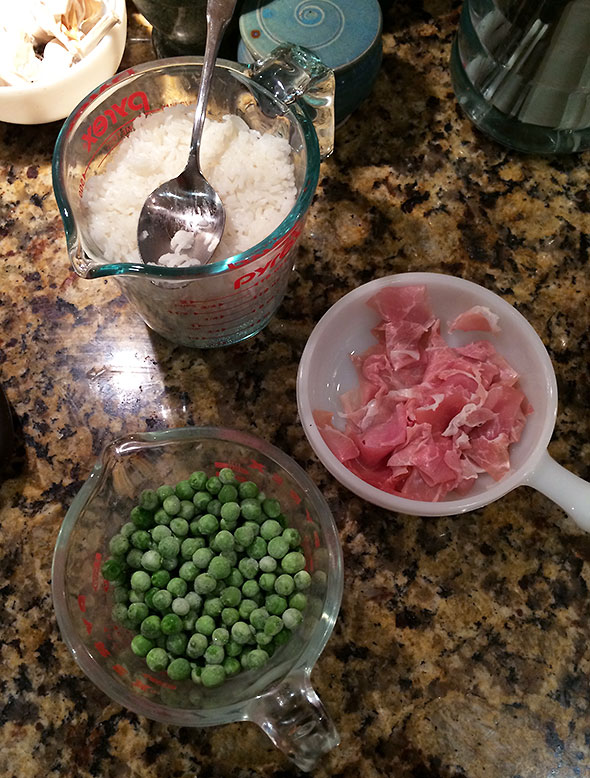 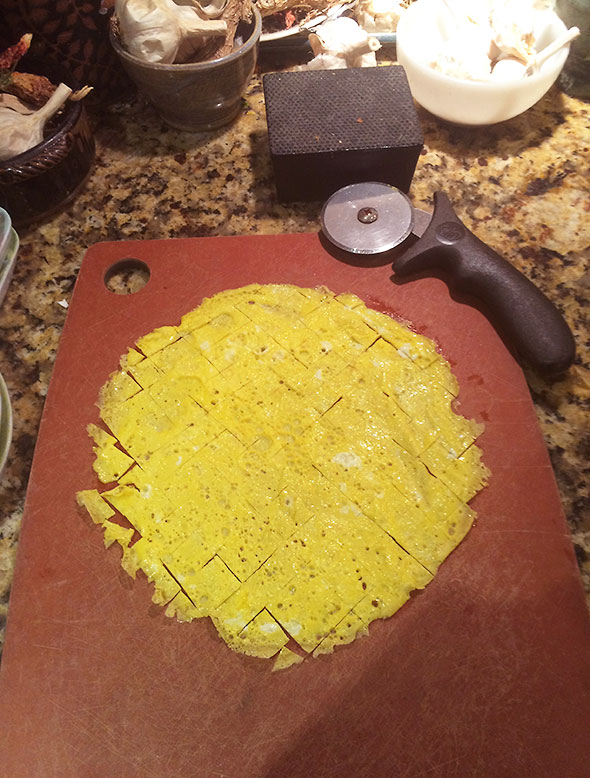 I was curious to see what Jeremy might find inspiring in this book, and it came from an unexpected but unexpected source. In a book filled with striking photographs, he was drawn to simple text recipe with no accompanying snapshot. The title was enough to excite him: oh-so-simple fried rice. Fried rice is one of the dishes that Jeremy’s mother Rita served her family for dinner and a favorite of Jeremy’s. 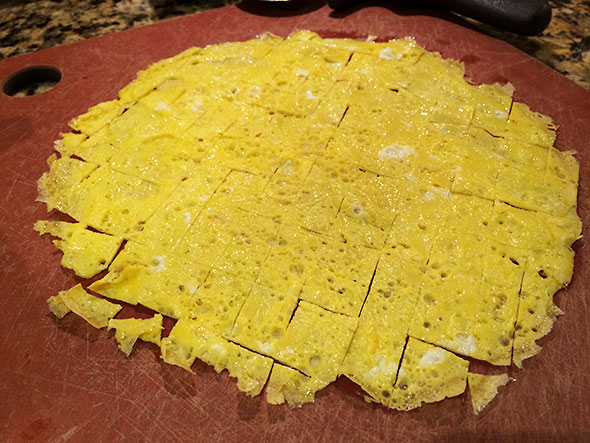 A dish with a short list of ingredients—peanut oil, egg, peas, pre-cooked white rice, ham, and onion—had appeal to Jeremy and myself. I was skeptical, however, that its appeal to our children. My experience with peas as a child that they were mushy, messy things that had an overpowering unpleasant taste. They land on a plate with a sloop, a leaky pile of goo that would ooze into and taint other more tolerable dishes. 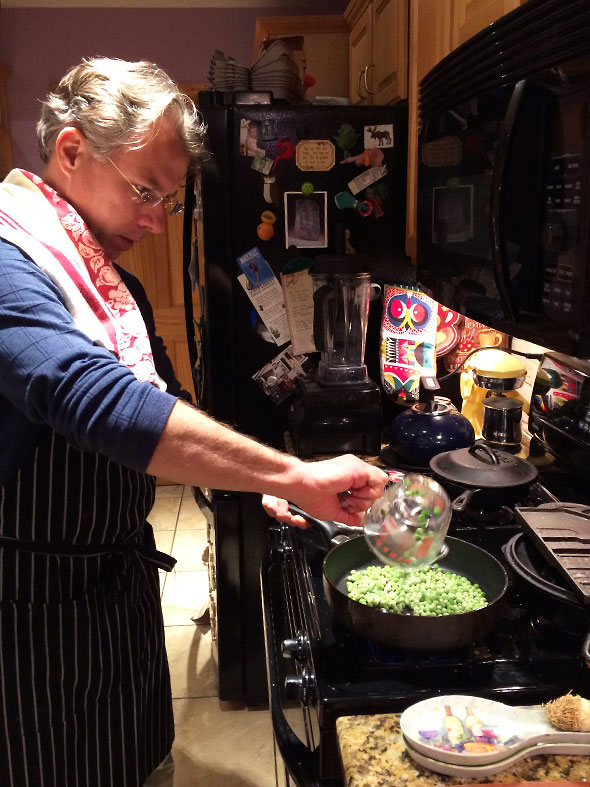 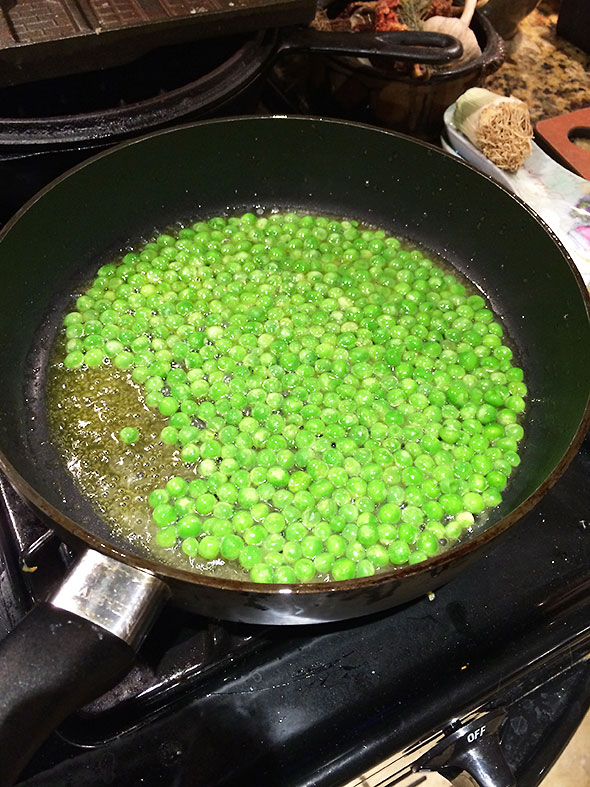 My husband’s early impression of peas contrasted mine as day to night. To him, peas were perky bites of sweetness. This aspect of peas I couldn’t even fathom until I was surprised by their pervasive presence in yummy Indian dishes like samosas and masala dosa. Indian food made me look at peas in a whole other light—where fresh, heated quickly, and mixed with rice they were were actually pleasant, raisin-like bursts of sugar in a savory dish. 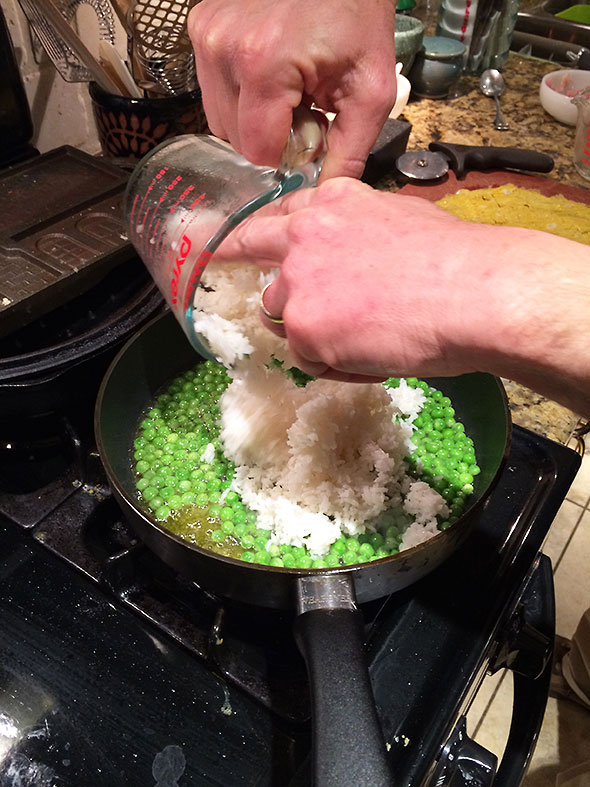 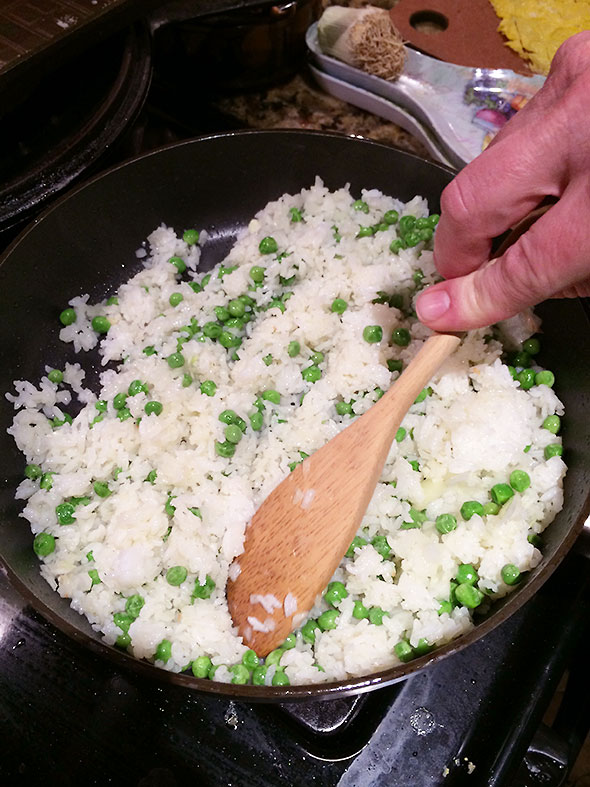 After cooking the egg like an omelet and slicing it with a pizza cutter into centimeter squares, Jeremy pours a quarter cup of oil—usually walnut oil but today olive oil—in a hot frying pan on medium high heat. He tosses a cup of frozen peas in the oil until they lose their frosted gloss and just begin to soften in the pan’s heat. Next he adds two cups of precooked rice—in this case, a extra pint of rice bought at a recent visit to The Lucky Dragon, 126 Dayton Street—to the frying pan. 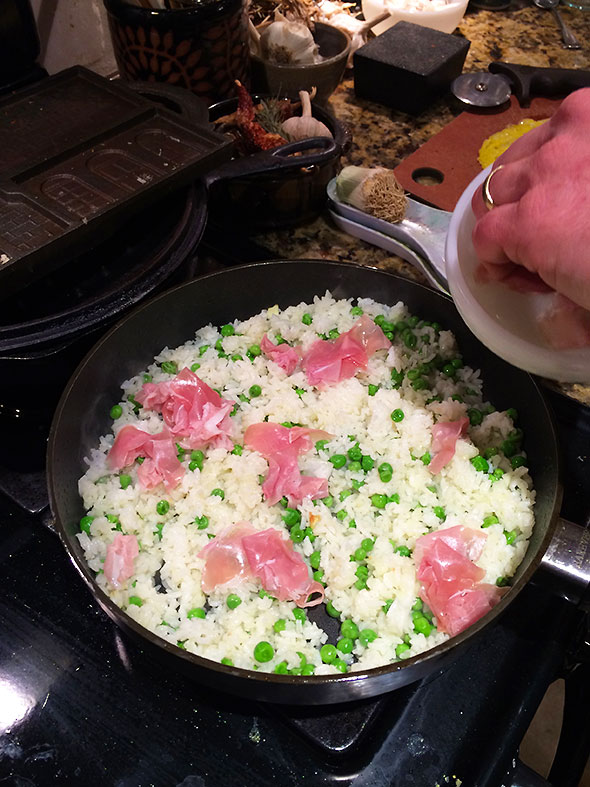 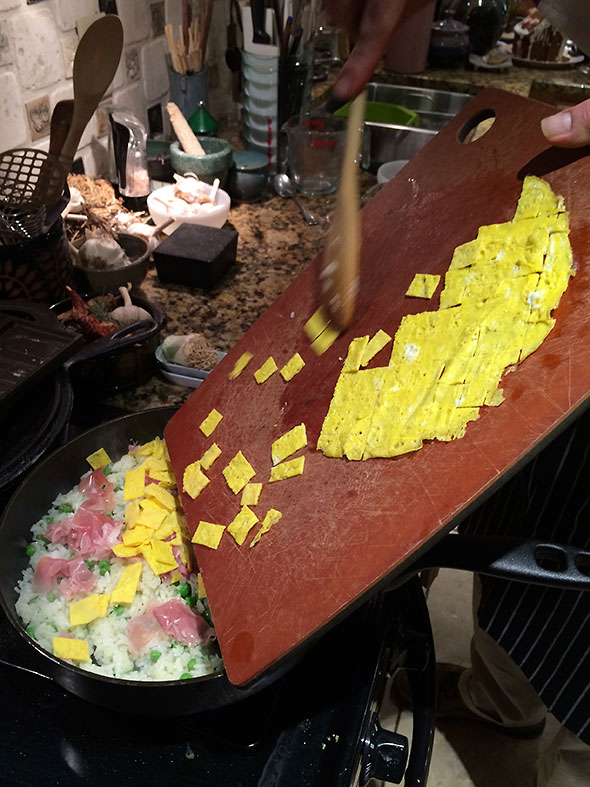 He adds half an white onion—finely diced—stealthily to the rice. He then adds small chunks of meat—preferably ham and salted—prosciutto his present favorite. Finally, he adds the egg squares and completes the dish. One can season the rice with salt and pepper and perhaps a teaspoon of sesame oil or seeds, but my husband prefers this dish in its simplest, straightforward form relying on saltiness of the prepared ham, the sweetness of the peas, and the nuttiness of the rice. 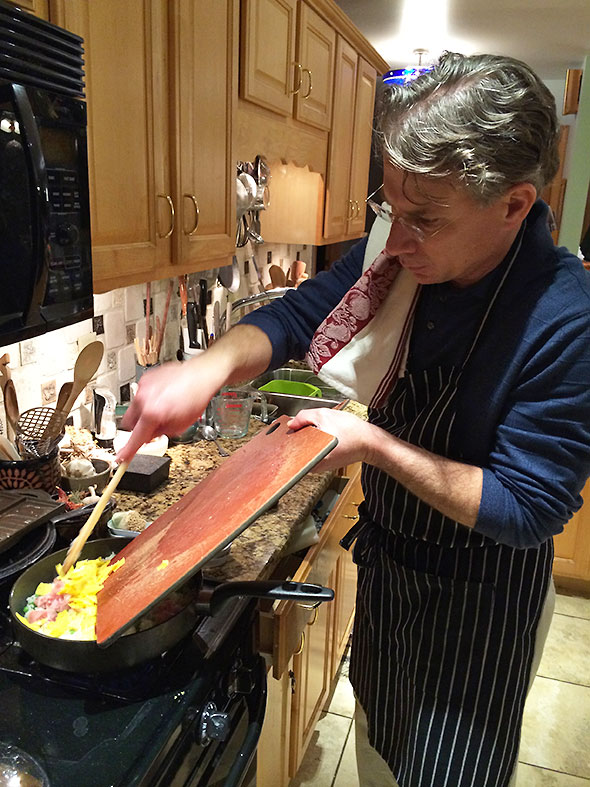 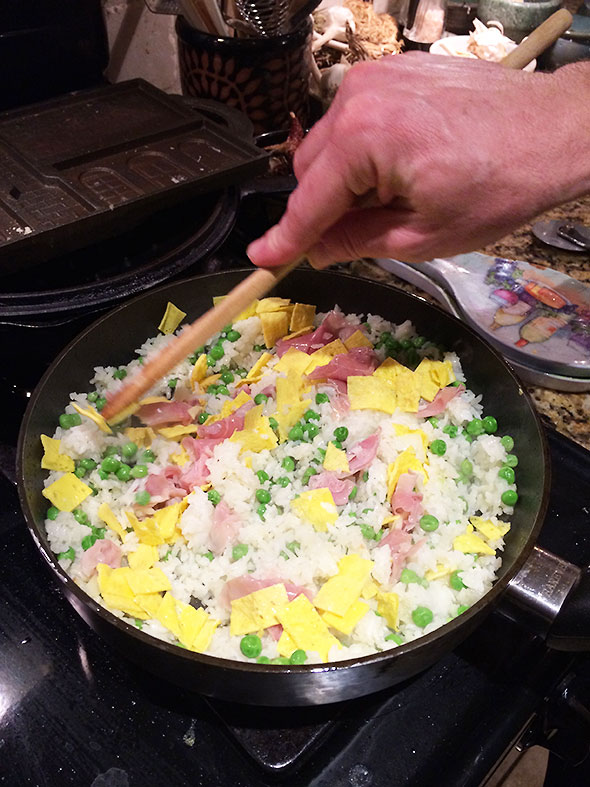 As I imagined the dishes that I would pack for my children in their lunches, they were in fact much like this “oh-so-simple” fried rice: a happy colorful mix of rice, egg, and vegetables. I’m grateful to my husband to giving our children an experience like his own and apart from mine. Peas are a welcome treat in a dish the children love to cook and even eat.