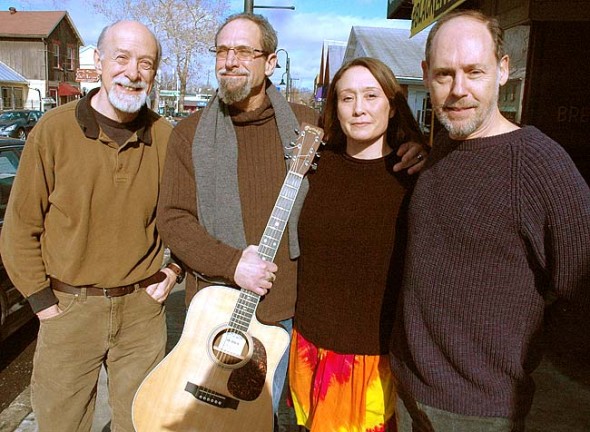 If I could ride on monarch butterfly wing/I’d go and catch the joy I’ve found within the Springs.”

So sings Scott Randall Lindberg in “Ode to the Glen,” a song inspired by daily hikes through Glen Helen that Lindberg started taking when he moved back to the village two years ago.
After 45 years of writing songs, the local forest changed Lindberg’s songwriting style completely. The 58-year-old’s new work is less intellectual and more aimed at “touching people’s hearts,” he said this week.

“After writing so many songs for so long, I became more intuitive, more romantic and more in touch with nature,” Lindberg said. “If I’m going to write a song, I want to make it meaningful and to bring joy.”

Lindberg will share his new work — which also includes the songs “I Am a Child of the Springs,” and “Honoring the Trees” — as part of the Songwriter’s Concert Series at 7 p.m. Saturday, Feb. 7, at the Yellow Springs Arts Council Community Gallery, 111 Corry St. Doors open at 6:30 p.m. and there is a $5 suggested donation.

Also performing is Mitch Coleman, another recently-returned former villager and professional musician with 30 years of songwriting experience. Coleman, 63, is well known locally as a jazzy, cocktail and dinner-music style pianist and will share his original songs on keyboard and guitar dating back to the ’80s. He lived in the village in the 1990s.

Coleman uses wide-ranging musical styles to create pieces from a “kind of musical feeling,” he said. There’s a country song “that has soul,” an “egalitarian-ish, reggae-ish” song, and a bluesy jazz ballad “You Only Want Me for Sex,” which was a crowd favorite when Coleman played occasionally at the now-closed WEB Coffeehouse several years ago. (It’s not autobiographical, Coleman says). He also covers the typical themes of anticipated, and lost, love, including a song called “Love in a Minor Key,” which is actually written in C Major.

The Songwriter’s Concert Series was started by Charlie Peters. Scheduled to perform in the March show are Tony Powers and Marianne Kesler. In April, brothers Carl and Dave Schumacher will play their own material along with Lorna Hunt.

Read the full story in the Feb. 6 issue of the News.