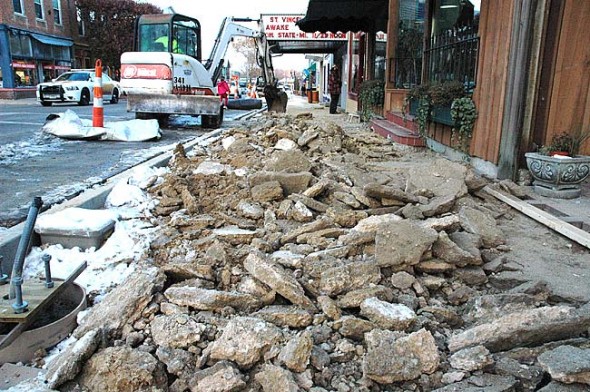 The Village announced last week that it plans to begin phase III of the downtown streetscape renovation on the southwest side of Xenia Avenue in mid-July. The project includes replacing sidewalks, curbcuts and removing and replanting trees along the route. (News archive photo by Matt Minde)

Sidewalks by Tom’s up next for repairs

Sidewalks along the west side of Xenia Avenue downtown will be replaced this summer as part of a multi-year Village “streetscape” project.

The $50,000 project runs from July 20 until as late as the end of the year, though Village Manager Patti Bates said she hopes sidewalks can be torn up and new ones poured and passable after six weeks, with the final touches complete five weeks after that. However, much of the project’s timing is dependent upon weather, she said.

Shopkeepers expressed frustration in recent weeks at both the timing of the pro-ject during the busy summer tourist season and that they were not consulted about the project start date ahead of time.

Last week Bates and Jason Hamby, superintendent of streets, sewers and parks, met with a group of shopkeepers to discuss concerns and gather feedback on timing. Originally, the Village planned on a June 20 start, which retailers said would be difficult as their business is heaviest in early summer.

Molly Lunde of Asanda Imports, who organized shopkeepers after hearing about the date selected for construction, said she is not resistant to the streetscape plan but disappointed that shop owners were not conferred with.

“I was certain after the chaos of last year’s project, that we would be [consulted], and was disappointed that this didn’t happen,” Lunde wrote in an email. “This project is hard on everyone, but it is especially difficult if you feel your input and needs are not even considered.”

Bates said that they intended to consult with business owners but had not yet done so. The Village also wanted to avoid making the same mistakes as last fall, when sidewalk construction along the east side of Xenia Avenue took longer than expected because of late season rain and snow that turned torn up sidewalks into a muddy mess. She instead hoped that most of the construction could be complete by the popular fall events of Street Fair, Art Stroll and Artist’s Studio Tour. In the end it was a tough call, Bates said.

“The unfortunate part is people like to be out and shopping at the same time that it is best to do construction,” Bates said.

After the meeting, the Village decided to phase the construction rather than ripping up all the sidewalks and then replacing them piece-by-piece, as was done last year, Bates added.

“When we talked to the business owners we came to an agreement that is a little better,” she said. “By doing it in sections each individual business is only bothered for a week or 10 days.”

Nevertheless, the project will be a burden for business owners, especially those who depend upon tourist traffic, even though the sidewalk improvements may help them in the long run, according to Lunde.

“It will be dusty and slow and loud. It will be more than a little inconvenient, and will probably drive us a little crazy, but how exciting it is that we are finally moving forward on this project,” Lunde wrote. “I can’t wait to see the transformation in a few years. In the end, I’m sure it will do wonders for our businesses.”

Business owners had hoped the project could be completed between late August and mid-October, when sales drop significantly, according to Lunde. But the Village responded that with potentially disruptive weather in the fall, an earlier start would be best, especially with so many fall events that bring more visitors to town. The pro-ject has yet to go out to bid.

Lunde added that at the meeting merchants on both sides of Xenia Avenue shared how last year’s sidewalk renovations led to a noticeable decline in sales, and some have not recovered or have lost customers entirely from the hassle. Shopkeepers also complained about not having access to their shops and poor construction oversight, especially on weekends when tourist traffic was heaviest.

Bates said that she hopes to develop better communication with downtown businesses in the future, and has created email lists for different geographical groups of merchants to inform them of street closings, water or sewer main problems or other issues.

The streetscape project will conclude next year when the sidewalks along Xenia Avenue between Corry Street and Dayton Street are replaced. In 2013 and 2014, sidewalk renovations along the east side of Xenia Avenue were completed, and last month seven new trees were planted. The downtown streetscape project was begun by former Village Manager Mark Cundiff and expanded by former Manager Laura Curliss three years ago, when it sparked controversy over the planned removal of 14 pear trees.