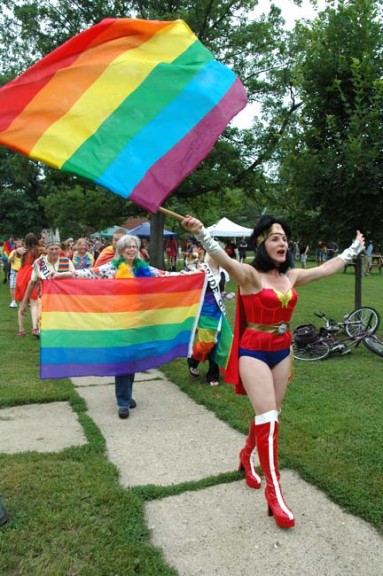 Pride steps out in the village

This weekend villagers are invited to celebrate diversity in Yellow Springs at a variety of events sponsored by the 4th Annual Pride Week.

“We want people to come together to honor being themselves and being accepted in Yellow Springs,” said Ann Simonson, an event organizer, last week.

Festivities kick off with Pride at The Winds Cafe from 4 to 10 p.m. on Friday, June 26, with special Pride drinks and the restaurant’s dinner menu. Events continue on Saturday, June 27, with an 11:30 a.m. family picnic at John Bryan Community Center (participants are asked to bring a dish to share), followed by a performance by musician Tracy Walker and local music, vendors and speakers from noon to 4 p.m., with a keynote talk at 4 p.m. by Rev. Aaron Saari of the First Presbyterian Church.

Highlighting the day is the Pride Sidewalk Parade at 5 p.m., when participants will walk through downtown.

That evening, the Little Art Theatre presents a documentary of the Dayton-based Rubi Girls at 6 p.m., with an appearance by group members following. The theater will present special Pride programming all week; see http://www.littleart.com for details.

Saturday night the Rubi Girls will perform at 10 p.m. at Peach’s Grill, following an 8:30 p.m. performance by the Soul Fire group.

New this year is an emphasis on families at Pride events, organizers said. On Saturday at the Bryan Center, kids can play on a bouncy castle and have their faces painted, according to Chasilee Crawford.

The emphasis on families is timely, as it follows a year in which 21 states legalized gay marriage, bringing the total to 37 states allowing marriages between same sex couples. This week the nation waits to hear the Supreme Court decision that could open the door for gay marriage in Ohio and the 12 other states where it is currently banned.

While gay marriage has made strides in recent years, historically there have been far too few places welcoming to gay families, according to Simonson. And organizers hope to right that wrong during the Pride events, at least in Yellow Springs.

“We want to make clear that it’s safe here to be a family with two moms or two dads,” she said.

Villagers have a right to be proud of their history at the forefront of social justice issues such as gay marriage, according to Saari in an interview this week. But he also warns against complacency, and hopes the Pride events, which will include vendors from organizations across the state, serve as an opportunity to re-assess local values and progress.

“We sometimes rest on our laurels,” Saari said. “But we need to continue to reexamine ourselves, and the Pride events are an opportunity for information as well as affirmation.”

During his keynote address, Saari, a Biblical scholar and ordained minister of the United Church of Christ, plans to address common Bible passages often used in arguments opposing same sex marriage. He wants to help people find ways to counter those arguments, which he believes are made when people misread the Bible, ignoring the dynamic nature of the book’s teachings.

“The Bible is a wonderful collection of documents that are living and breathing. They’re too magical to be taken literally,” he said.

Saari is proud to be pastor of a church in Yellow Springs that, as a member of the Presbyterian Church (USA) denomination, currently can provide marriage to same sex couples. If the Supreme Court comes out in favor of marriage equality, Saari vows to officiate at weddings for same-sex couples free of charge for the next year.

For Saari, who came out as bisexual two decades ago, the Pride events are personal as well as political. The events also resonate for Crawford, the mother of Zay Crawford, a local 12-year-old who was born a male and now identifies as female. Her child’s struggle to claim her sexuality has been a huge learning experience for the whole family, Crawford said, and she believes the Pride events can help to make Yellow Springs, while already a welcoming community for her daughter, even more aware of issues that affect gays, lesbians, bisexuals and transgender people.

“I want my child to be known as more than a transgender child,” Crawford said. “I want her to be known as an artist, a musician, as someone who likes to climb trees, not someone who is put in a little box. She has so much more to offer this world.”

Zay will serve, along with Melissa Heston’s Wonder Woman, as marshals of this year’s Pride sidewalk parade. And following the Rubi Girls documentary at the Little Art Saturday night, a short film on Zay and her family will be shown, with family members speaking afterwards.

While the Pride events speak directly to members of the LGBTQ community, they are equally relevant to that community’s straight allies, organizers believe, because a world in which gays, lesbians, transgenders and bisexuals are treated with respect and equality is a world that’s better for all.

“People will be there to share the love,” Crawford said of the Pride events. “That’s what it’s all about.”