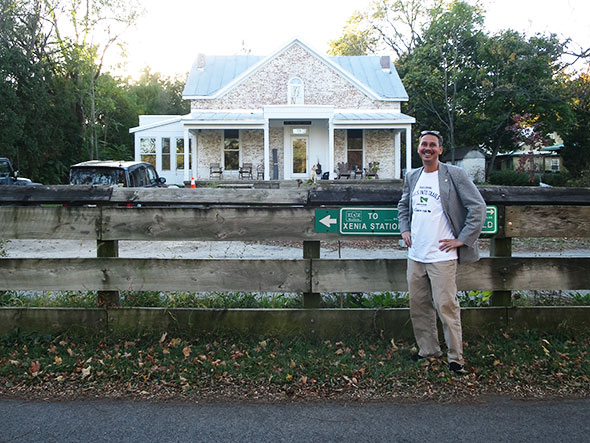 I grew up next to railroads. The Erie Lackawanna Railroad ran near my childhood home. We could hear the muted clatter of train cars as they passed on the other side of the Susquehanna River. To this day, I can never sleep so well as when I can hear the air horn of a engine passing. My grandfather Morton Magnus was a train engineer for the Erie Railroad. His job was to control the momentum of the long snaking train. He worked with the brakeman based out the caboose and the car took on particular charm for his family. Decades after his medical retirement, Grandma Katherine would point to the caboose at the end of passing trains and tell her grandchildren “Wave to Grandpa!”

An old track for the Delaware, Lackawanna and Western Railroad Company—once connecting Buffalo, New York to Hoboken, New Jersey—ran right though our backyard. The rails and ties had long been pulled up perhaps around the time that the DL&W merged with the Erie Railroad. Poking along the bed, occasionally we’d find a discarded rail spike abandoned among the gravel. The trail itself wasn’t abandoned; it was too useful. When the Susquehanna would flood River Road, we’d ride into town on the elevated track bed. Once we had bicycles, we’d take them out on the trail well worn but generally free of traffic. The trail was separated from our house by an embankment of earth and trees but, right at the end of our property, the embankment abruptly ended. With such easy access to the single track, our house seemed like a station along the old line. The line itself became our own personal connector, and we’d bounce along its corridor almost daily. 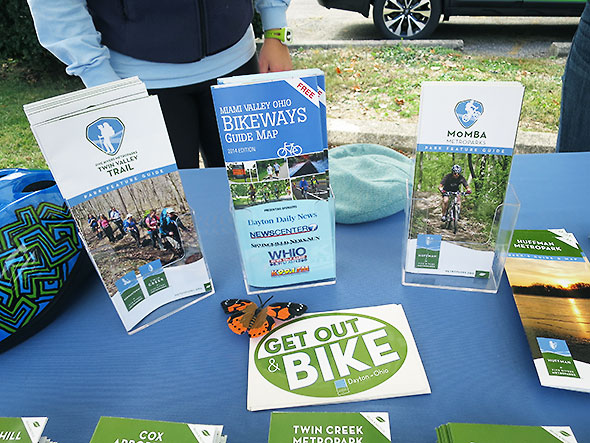 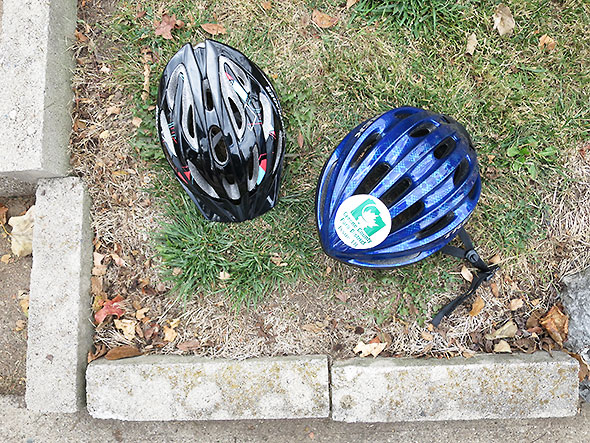 I left home for college in 1985 right around the time that the railroad companies began divesting themselves of property. Our old bike path was sold to the county and then split up in parcels among the adjacent property owners. The sale splintered the right of way into a thousand pieces. The irreversible event struck me as uncommonly tragic. 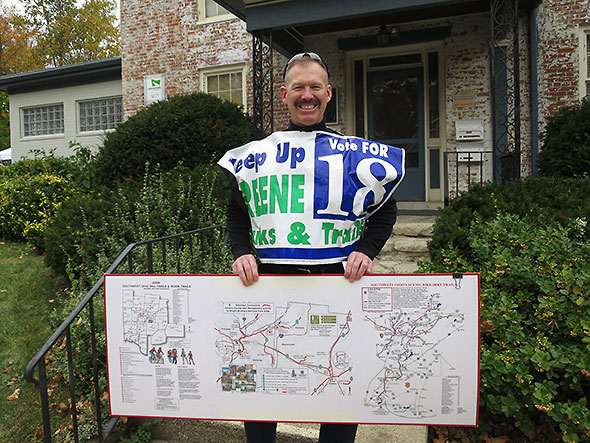 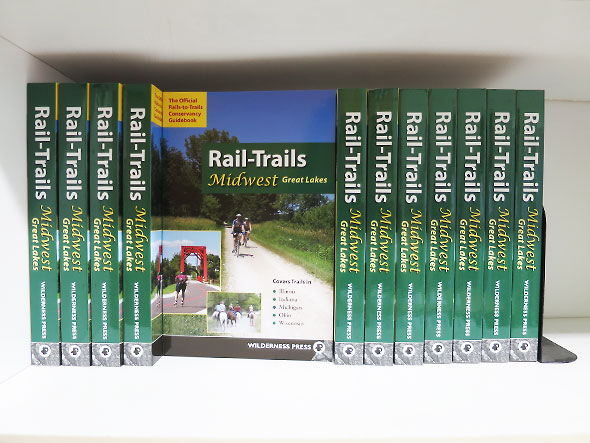 Here in Yellow Springs during the 1970s and 1980s, local residences saw what I saw…a railway that could be converted from private holding to a community asset and connector…but they saw this opportunity in time to do something about it. Their challenges were far greater than ours would have been in Nichols, New York. The heavy wooded ties were still in place along the Little Miami and firmly compacted into the ground. 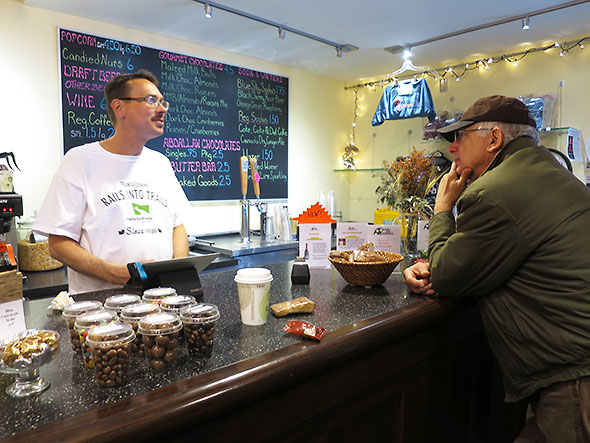 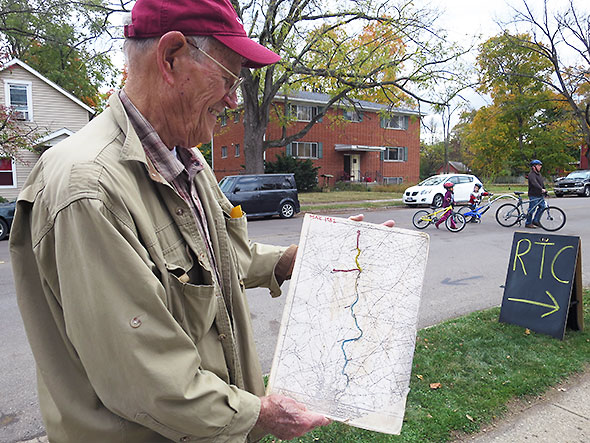 Oddly enough, the herculean effort required to remove the long, flat, heavy barricade may have been the very thing in Yellow Springs that preserved the opportunity that my hometown let pass. As it was, the plan to install a hike and bike path through the village was not universally accepted. Many resisted voicing serious concerns about safety and the impact to Glen Helen; others had strong reservations about the culture shift that the pathway heralded. Still the bold plan moved forward, bolstered by an anonymous donor, enabling the village to take full advantage of the windowed opportunity. 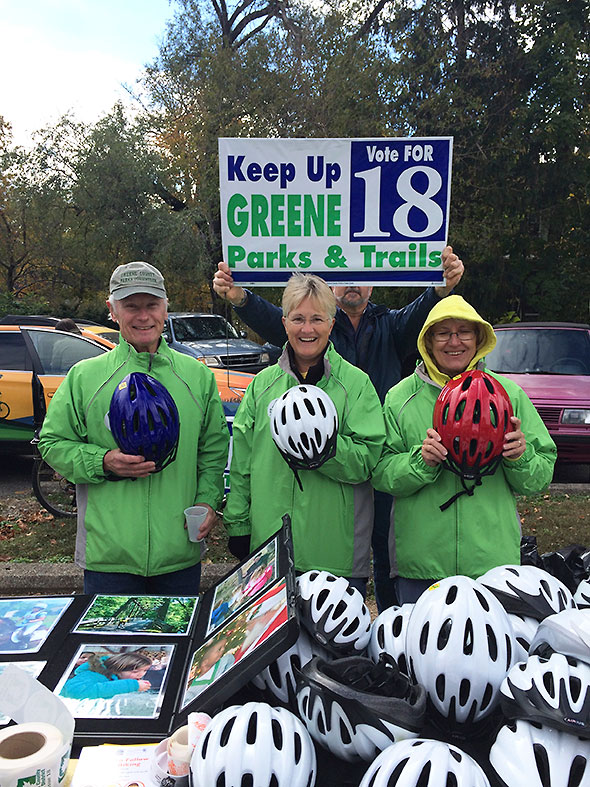 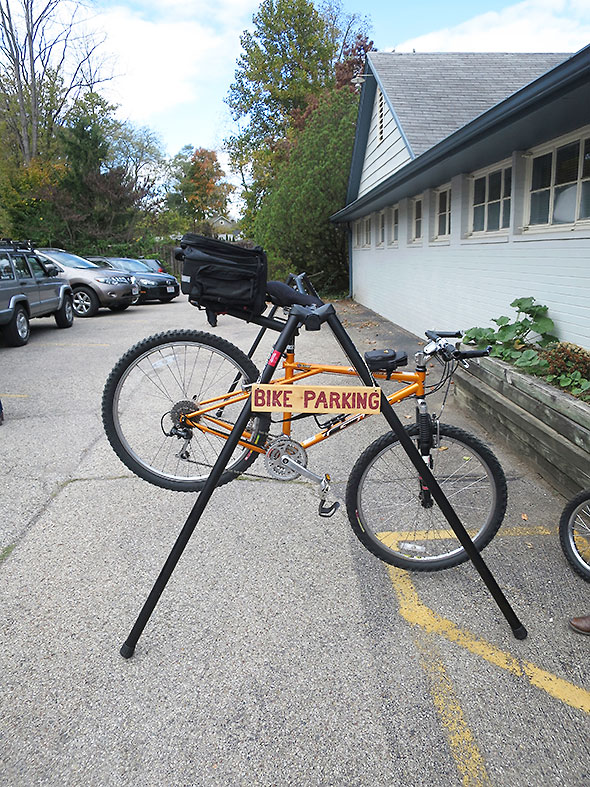 I heard the story of the Little Miami Scenic Trail in full on Saturday 17 October 2015 when I attended the open house and ribbon cutting for the new midwest regional office of the Rails to Trails Conservatory, 716 Xenia Avenue. The office employees—Eric Oberg, Director of Trail Development, and Brian Housh, Policy Manager—hosted a film screening of conservatory documentaries at the Little Art Theater in the morning and, in the afternoon, a health and fitness fair at their new offices. The ribbon cutting at the office drew Greene County Commissioner Tom Koogler, Xenia Mayor Marsha Bayless, Yellow Springs Chamber of Commerce Executive Director Karen Wintrow and Yellow Springs Village Manager Patti Bates.

I attended all three events: the documentary screening, the ribbon cutting, and the wellness fair. The documentaries discussed community efforts that convert train beds into hike-bike trails.

“Rails-to-Trails Conservancy: An Introduction to Our Work”
“Pathways to Happy”
“The Rust Belt”
“Trailside Gallery of Idols & Icons a Big Hit in Florida”
“Is It Safe?”
“Trails Mean Business”

These efforts took into consideration safety, aesthetic appeal, neighborhood collaborations, and appealing amenities to draw new residents and businesses. One film got me particularly interested in the work of Jason VanSickle, Executive Director of Bike Cleveland. He promotes bike sharing and commuter hubs in the city. The film presented these concepts from the urban perspective and raised the question of what may be applied to the more rural setting of Yellow Springs…in particular aspects of a commuter/hospitality hub that could include safe and secure parking for bikers, lockers, and showers. 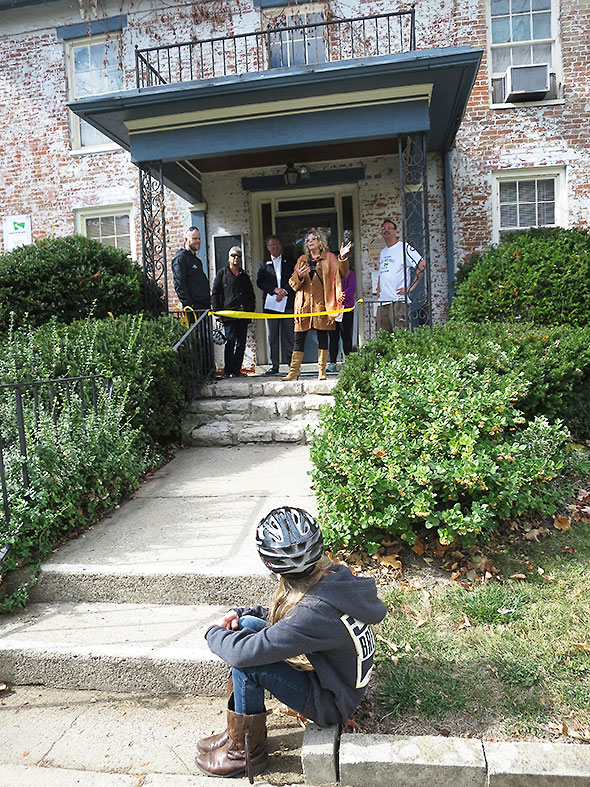 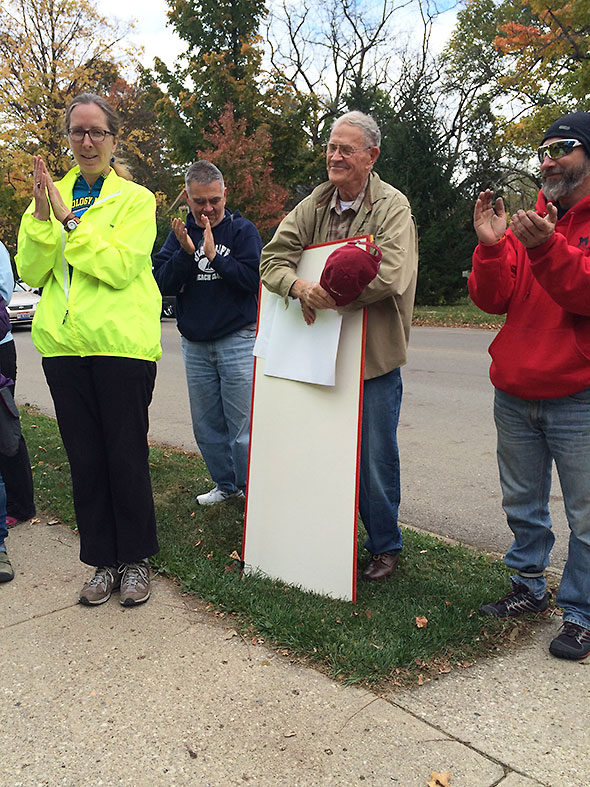 At 716 Xenia Avenue, the fair was hopping. Officials gathered at 2pm for the ribbon cutting that welcomed two new jobs—Oberg’s and Housh’s—into the community. Greene County Parks and Recreation and Five River Metroparks were in attendance among the local organizations to join the wellness fair. I got a chance to talk to the Metroparks briefly about their mountain bike trail. Then, at length, I discussed bikepacking the Greene County Park & Trails system and their new bikepacking-friendly campsites. 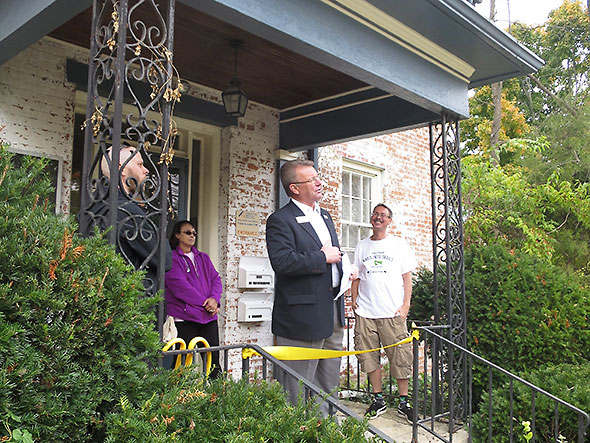 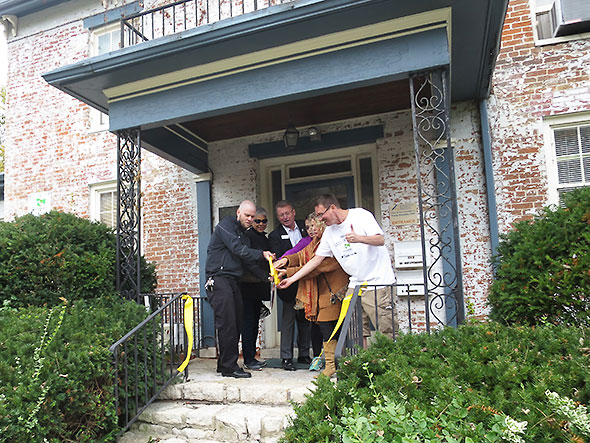 I was excited to learn the history of the Little Miami Scenic Trail from Ed Dressler, the man who led the negotiations with the railroad to acquire the very narrow and very long strip of land for the village and fit it for new service. Dressler is keen to share his story with the conservatory…a story that involves overcoming many political, bureaucratic, and engineering conundrums. 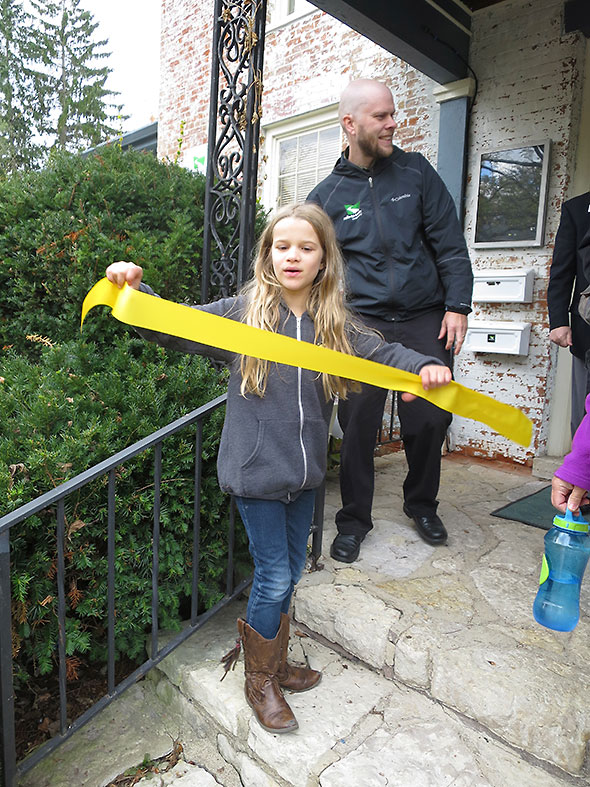 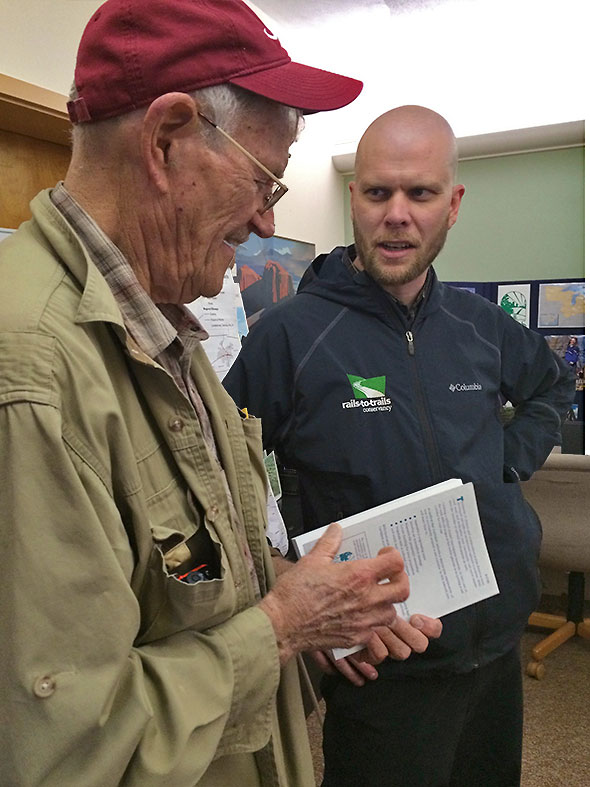 Near the end of the event, I found Dressler and Oberg in tight consultation. Oberg, Housh, and Dressler remind me of Grandpa Magnus. They are the modern day engineers whose purpose is to control the mighty momentum of rail-to-trail connectors. Wrangling the dynamics of many moving parts, they’ll work with local governments and interested parties across six states—Ohio, Indiana, Illinois, Minnesota, Michigan, and Wisconsin—and will resurface these maps with the stuff that makes for enduring legacies.