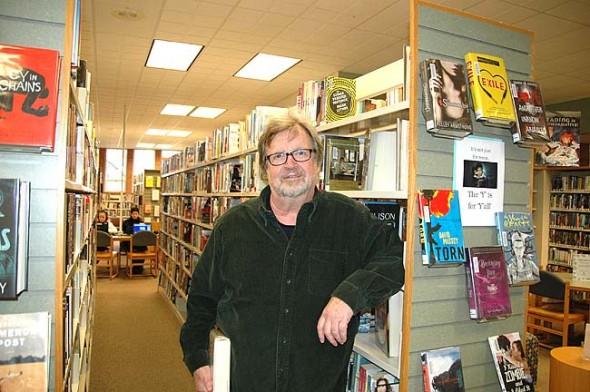 Rajan Kose at one of his favorite spots in the village, the Yellow Springs Public Library, which he refers to as the local “crown jewel.” Kose moved to Yellow Springs two-and-a-half years ago, drawn by a lifelong friendship and the sense of peace and community he encountered here. (photo by Audrey Hackett)

Seeking a simpler life in village

Because so many in our community have moved or stayed or returned here by conscious choice, the News is inaugurating “Why YS?” — a series on what, exactly, drew some of our residents to settle in Yellow Springs. If you have a story that fits our theme, feel free to contact us at ysnews@ysnews.com.

This is the first article in an occasional series looking at why people choose to live in Yellow Springs.
• Click here to view all the articles the series

All roads into Yellow Springs are just two lanes wide, and new resident Rajan Kose likes them that way.

“There’s no four-lane highway into town,” he noted in a recent interview. “As you enter Yellow Springs … things simplify and become slower. The roads into town are representative of what this place means to me.”

Kose first drove into the village five or six years ago, from Boulder, Colorado, to visit his “oldest, dearest” friend, Ruth Paige, and her husband, Harvey, both longtime residents here. Paige and Kose grew up together in India, the children of missionaries working in that country during the last days of British colonial control.

“We met when we were one year old,” said Kose. “We’re not blood relations, but we call each other brother and sister.”

Kose said he loved Yellow Springs from the moment he first saw it, charmed by its compactness, its lack of pretention, its peace and calm. “I thought, ‘Someday I want to live here.’”

Someday came around much sooner than he expected. A couple of years later, in the spring of 2013, he decided to try out village living for a few months. He secured a short-term rental and spent three months in Yellow Springs. The experience deepened and confirmed his first impressions.

“I found it to be a peaceful life,” he recalled. “People stop on sidewalks or in Tom’s Market to talk. People aren’t in such a hurry; it’s not ‘Hi, I have to be in a meeting.’ People are willing to take time and chat.”

This was the kind of life he found himself longing for, after 38 years of living in Boulder. He moved to that city in 1975, he said, when it was still a “sleepy western college town,” part cowboy, part hippie. Kose raised two children there, and built a career as a fine art photographer and, later, graphic designer. But the city changed with the influx of California money, he said, and despite many friends and a long history there, he began to feel less at home.

So when his trial run of Yellow Springs was up, he decided to move here for good. He found a house to rent just a few blocks from downtown and took up permanent residence in July of 2013.

“This seemed like the ideal place for me to live at this point in my life, so I made the plunge,” he said.

And village life has proven “ideal” in myriad ways, according to Kose, who’s known as Raj here, an abbreviation of Rajan, a name he took many years ago as emblematic of his Indian roots.

He’s formed many friendships in Yellow Springs, particularly among those in the artist community, which he’s found to be supportive and welcoming. “There’s not a lot of ego here,” he noted. He’s part of a life drawing group that gathers weekly at local artist Tom Verdon’s studio, and he’s active in the Yellow Springs Arts Council, “a really fine institution.”

Given his international upbringing, Kose is pleased with the cosmopolitan feel of Yellow Springs. “Many people are world-centric in their outlook,” he said. “I really love that.” Though there’s not an organized Indophile community, he said he’s met quite a few people in the village who have connections with India, Asia and other parts of the world.

He’s a fan of the Chamber Music Festival, delighted by the world-class musicians that the group pulls in. And he’s a regular at the Emporium’s Friday night wine and music events, serving a couple of times each month as a volunteer pourer. “The Emporium is such a gem,” he said. “It’s unpretentious, comfortable.”

But the “crown jewel” of Yellow Springs, according to Kose, is the public library. “I’ve been to libraries all over the country [but here] you can get any book in the world, and that blows me away,” he said. He makes two or three trips to the library each week.

He’s struck by how loyal Yellow Springers are to these and other local institutions. “People are loyal to this community and want to see it thrive, even if that means digging deeper into their pocketbooks,” he said. His sense of prevailing local attitudes is that people want a strong economy, but not at the expense of what makes Yellow Springs Yellow Springs.

Kose was still new to the village when the CBE issue came before voters two years ago. “In many ways, I think the town was wise to reject [the plan],” he said. Boulder offers a cautionary tale, he believes, demonstrating how a burst of outside business and money can “change the nature of a place.” That could happen in Yellow Springs, he said.

His experience in the local economy has been difficult, he admitted. Kose owned his own business, Kose Graphic Design, for many years in Colorado. After taking a couple of years off around his move, he’s been working to restart the business in Yellow Springs. But finding new clients has been tough.

“I’ve made a fairly strong effort to generate clientele,” he said. “But it hasn’t worked to my advantage.” He speculated that Yellow Springs, as a smaller market, may not be large enough to support very many of any given type of business.

“I do miss having gainful employment,” he said with a wry smile, but then added, “Challenges make life worth getting up for.”

Economic challenges aside, Kose said he sought a simpler life in leaving Boulder, and found it in Yellow Springs. His decision to relocate has a deeper meaning, he explained.

Drawing on Hindu understandings of the four stages of life, he said he realized several years ago that his “householder” phase — the phase of middle life typically involving community building, employment and raising children — was coming to an end. Instead, he was entering what the Hindus called the “hermit” phase, or in Western terms, the time of retirement.

“This is when you begin to divest yourself of worldly possessions and reflect on your life, hopefully gather wisdom from your experience,” he explained, adding that he is not a Hindu, but finds value in the faith’s ways of conceptualizing human life.

Kose is not sure how long he will stay in Yellow Springs, or what might lead him elsewhere. For now, he is simply happy to be here.

“This feels so, so right for me, for my mind and heart,” he said.