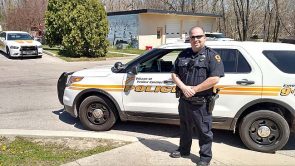 On a sunny day last week, Yellow Springs Police Department’s John Whittemore cleared a few duffel bags from the front seat of the cruiser in front of the police department. The bags are part of the standard equipment that accompanies an officer while on duty, and include everything from binoculars to sheaves of paperwork to a defibrillator. He radioed in that he had a civilian passenger — this reporter — and began his amble around town on proactive patrol.

Officer Whittemore arrived at the YSPD from West Carrollton a little over three weeks ago. He is 41 years old and has been a police officer for 16 years. Whittemore was born in Xenia and grew up in Fairborn, and it’s the connection to the area where he’s lived most of his life that inspired him to become an officer.

“The area holds a special place in my heart,” he said, “I’m going to give the village the best service I can.”

While in his vehicle, a microphone is clipped to his belt that is synced to his car — anytime he uses his sirens, the camera and microphone automatically start recording. As he was driving, he held a remote control that activated the radar that gauges the speed of drivers. Just outside of town, on Dayton Street going south, he clocked a car going 40 in a 25 zone. The cruiser quickly turned around and zoomed up a hill after the speeder. The driver pulled over. He pulled up the driver’s record after collecting her license. No traffic citations since 2004, he said, and he let her off with a written warning.

The brief thrill of speeding after a speeder, the calm resolution of the encounter and his overall interest in interacting with the public speak to the reasons that prompted him to become a police officer 16 years ago, and the reasons why he has enjoyed it since.

Whittemore said going into law enforcement was something he always felt he might be interested in. A neighbor and some good family friends were police officers and firefighters, and their experiences sparked an interest in serving the community in a similar way. These avocations made sense when considering his “pretty strong sense of ethics” and his connection to the area where he’s lived most of his life. He went back and forth between the two fields, but by sophomore year of high school, he knew for sure he wanted to go into law enforcement. In fact, his interest in the career made for a pretty straight-laced teen — he didn’t take part in too many youthful shenanigans lest he jeopardize his chances of becoming an officer later in life.

After graduating from the police academy in 2000, Whittemore worked in West Carrollton and most recently Jamestown. His familiarity with the area (and the similar computer systems used among area departments) factored into his being hired in Yellow Springs to fill the space left by outgoing officer Stephanie Spurlock, said Yellow Springs Police Chief David Hale. The pool of 39 candidates for the position was steadily whittled down through aptitude and agility tests, and Whittemore came out on top.

He characterized himself as a pretty soft-spoken guy, and said that police work has helped him break out of his introverted shell and imbued him with a confidence to step up when he needs to, though he also said his calm demeanor is very helpful in de-escalating tense sitations.

Chief Hale said Whittemore’s temperament and judiciousness are also reasons why he was hired.

Whittemore’s résumé is bolstered by technical training. Officers are required to have a minimum of 700 hours of training and often take additional coursework in an area that interests them. Whittemore said he has always been interested in the physics of auto accidents, and has completed 300 hours of crash investigation training. He was the go-to crash investigator in West Carrollton, he said, though since none of the roads in Yellow Springs are over 35 mph, there fortunately aren’t a lot of serious crashes. He also completed an evidence technician course at the Dayton crime lab.

While all of the classes and training have helped make him a well-rounded officer, he said, first and foremost an officer needs to be sensitive to people’s needs.

“If someone calls the police,” he said, “they’re having a really bad day.”

Seeing people at their most vulnerable and scared has made an indelible impression on him. The prevalence of domestic violence was a startling reality he had to face, he said, and crimes against children are especially difficult to see. Sometimes the situations he has dealt with have bothered him for weeks, he said.

“We are taught a lot at the academy,” he said, “but you don’t understand what it’s like until you’re on the street dealing with it.”

While he grew up in the area and has been to Yellow Springs numerous times over the course of his life, working as a police officer has allowed him to get to know the many sides of the village.

He appreciates the area on a professional level, he said. Officers are trusted for their experience, and he values that officers have discretion in issuing citations and determining to which court certain misdemeaner defendants are sent. YSPD jurisdiction doesn’t extend very far outside of the village, but the communication between area law enforcement agencies is great, he said, as Yellow Spring is kind of an island in Greene County surrounded by other jurisdictions.

The ease of mutual aid between departments reflects the temperament of the area, he said. Yellow Springs is an interesting melting pot of people, most of whom are truly interested in the wellbeing of their community. A number of people, from excited kids to construction workers, waved as he drove by. And while the village is not immune to crime, the level of crime here is relatively low.

“A lot of calls I get are from hikers lost in the Glen,” he said.

Sometimes the callers see the absurdity or humor of a situation in which they’ve found themselves — disputes over escaped chickens come to mind — and this allows him to inhabit a role more akin to a “peace officer.”

However, crime is going to happen, he said, and the department wants officers professionally capable of dealing with it.

It is this aspect of the job, the excitement of pursuit and the ability to resolve these problems that makes Whittemore happy to be a police officer wherever he is.

“Nothing thrills me more than solving a crime and bringing whoever’s responsible to justice,” he said.