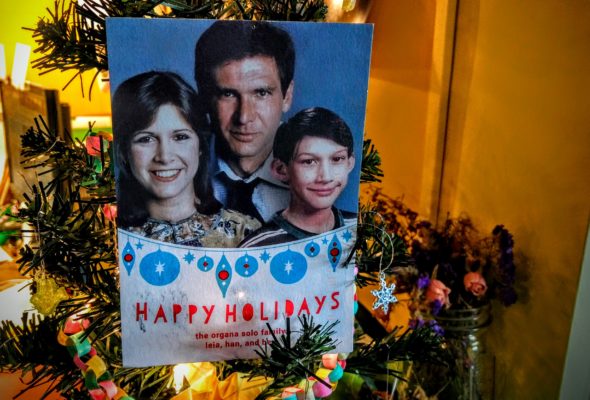 A holiday greeting from the Organa-Solo clan, received this week after news of the death of Carrie Fisher.

I’ve been feeling guilty this week about a blog I wrote around this time last year. The first in the new trilogy of “Star Wars” films, “The Force Awakens,” had just been released, and my co-worker Dylan and I, both giant fans, wrote a dual reaction to the newest addition to the franchise for the News website. My half of the blog gushed with praise for Rey, the film’s female protagonist, the answer to all my childhood longings. It also lamented the fact that the original trilogy’s female protagonist, Leia Organa, in my own words, “wasn’t given a whole lot to do.”

I was at a Starbucks with my two younger sisters on Dec. 27; we were looking for a geocache — a sort of hidden treasure box that you have to find using GPS coordinates and clues — digging around in bushes and behind trash cans and generally trying not to be noticed. We sat down on a bench to consult with our clues again, and I looked at my phone. A notification from the NPR app on my phone heralded the worst news: Carrie Fisher, at the age of 60, was dead.

I knew that she’d suffered a heart attack a few days before, but I honestly, with every bit of myself, did not believe that she would die. Like literally millions of other Star Wars fans, Carrie actually *was* Leia Organa to me, the inimitable princess turned general who got stuff done and who would endure no sass from anybody — especially not Death.

Obviously, I didn’t know Carrie Fisher; I never met her, I wasn’t a friend and I don’t know what she was like behind closed doors. But the things I’ve read from and about her over the years have led me to believe that the things I liked best about the iconic character she played were things that were true of her as well: she did cool stuff and she didn’t take any crap. I had maintained a hope that I might meet her some day at a comic con or see her in one of her one-woman shows, and certainly I expected to see her in the final installment of the new “Star Wars” movies. The fact that I won’t feels like a punch to the gut, a disappointment that edges into grief.

But mostly, I’m disappointed in my own words about her most famous character, and my assumption that, just because she never wielded a light saber, Leia was somehow less-than.

Further reflection upon her character reveals the truth: Leia Organa was a woman who never stopped working. Even when she was held hostage, when her home and family were disintegrated before her eyes, when her lover was frozen in carbonite, when her marriage dissolved, when her son became a whiny supervillain, when her jedi brother ran away and pouted, Leia was the one who kept on working. Like her brother Luke, she was gifted with a sensitivity to the Force, but rather than pursue the path that he had taken, she continued to forge her own, working with and for the people who made up the communities around her. Whether we see them all on screen or not, it’s clear that Leia did many, many things. And, one assumes, she did them without the help of a mystical electronic knife.

So I amend my statement from last year, as I have amended many things as I’ve gotten older; Leia’s role was perhaps not as exciting to me as a young person, since I never got to see her doing sword tricks or leading derring-do space chases. Actor Daisy Ridley’s character Rey came along last year and finally filled that long-empty hole in my heart, but with the passing of Carrie Fisher, I realize the hole that is being left: the one that will miss the woman who was at turns sassy and vulnerable, tender and biting, not without faults, but always funny, beautiful and utterly in control of herself. As a grown woman, Leia Organa and Carrie Fisher are the heroes I need, and the ones I will miss the most.

I arrived home from Christmas vacation to find that a card had arrived in the mail; it was a kind of joke card, sent by my best friend before the death of Carrie Fisher. Pictured above, it was a holiday greeting from Leia herself, as though I were a close family friend. I laughed — and then, of course, I cried.