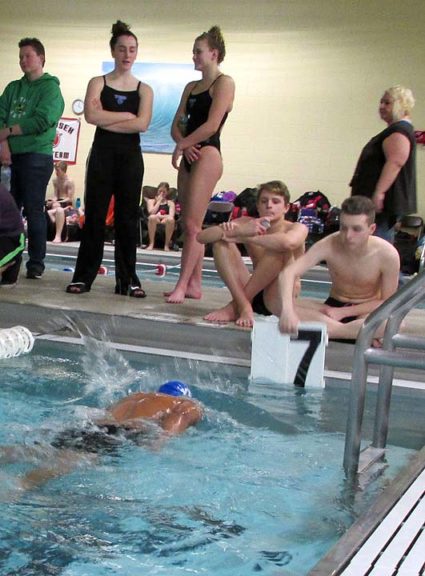 The YSHS Bulldog swim team set a few school records at their last two meets, including a first-place finish in the girls 400-yard freestyle relay at the Bethel High School Invitational on Dec. 18. Above, teammates Hannah Morrison and Olivia Chick watch as David Walker swims the 500 freestyle. (Submitted photo)

“To your mark — get set — go! Our Bulldog swimmers are on the mark as the swimming season is in full swing,” said YSHS swim coach David Hardwick, and two meets held in December showed the strength of this year’s exceptional swimming team.

On Friday, Dec. 9, the Bulldogs took to the pool against Oakwood and Fairborn at the Dayton Raiders Aquatic Club. According to co-coach Bradley Martin, a meet that early in the year is generally a tune up for the swimmers, with many events typically shorter than the average high school meet. It was a great opportunity for new swimmers to get their feet wet. “Pun intended,” he said.

The swimmers’ techniques were vastly improved from last year, notably off the starts and turns, with more improvement expected as training shifts to an endurance focus. Martin reported that it was hard to gauge performance improvement in most events because of the meet format, but noticed best times from Jude Meekin, Ella Comerford, captain Hannah Morrison, Harper Mesure, Sara Zendlovitz and Lauryn DeWine.  The coaches expect more best times as the swimmers get more exposure to events they’re more accustomed to.

Nevertheless, every YSHS athlete had a top-3 finish in either a relay or an individual event, including new swimmers Haley Smith and brothers Parker and Jackson Bleything. Both the boys and girls teams came in second place out of the three teams, with host Oakwood winning the event.  Individual winners included Eden Spriggs, who won the 50 fly and the 100 back, taking first place in the former and setting a new school record with a time of 29.35. Ellery Bledsoe won the 50 breaststroke. Relay winners included the girls 400 free relay, made up of Meekin, Smith, DeWine and Zendlovitz. On the boys’ side, team captain David Walker won the 50 fly, with Walker, the Bleythings and Trystan Burch winning the boys 400 free relay. Burch set a school record in the boys 100-yard individual medley, with a time of 1:12.51.

Swimmers are awarded points for how they place in each race. Spriggs, with 14 points, scored 15 percent of the girls’ total score, while Walker’s 11 points made up 18 percent of the boys’ score.

The Bethel High School Invitational at the New Carlisle Fitness Center on Dec. 18 was a meatier affair, boasting no less than 24 events, with many swimmers participating in more than five races each.

Both the boys’ and girls’ teams took fourth place in their respective sides after the 24 events, but the combined-team score awarded them a third-place finish overall out of seven skilled teams.

While not quite as record-setting as the team’s previous meets, the Bulldogs’ relay team set another school record with a first-place finish in the girls’ 400 freestyle relay. Olivia Chick, Spriggs, Morrison and Meekin churned the water at a record speed of 4:29.29. That race was the event of the day, said coach Hardwick. Chick also took first place in the girls 200 individual medley and the 100 freestyle, with times of 2:18.19 and 56.03, respectively. Meekin and Asa Hurwitz took second (7:10.72) and third (7:21.22) out of 15 in the difficult 500 freestyle, while Spriggs took first in the 100 backstroke with a time of 1:10.63. Hurwitz and Ellery Bledsoe took second and third in the 100 breaststroke, with times of 1:32.43 and 1:36.75. David Walker took second in the boys 500 yard freestyle.

According to Hardwick, the Bulldogs were “barely edged out by powerhouse Wayne High School.” No matter: in addition to their top three finish, the Bulldogs’ 11 swimmers set a remarkable 15 personal records at the meet.