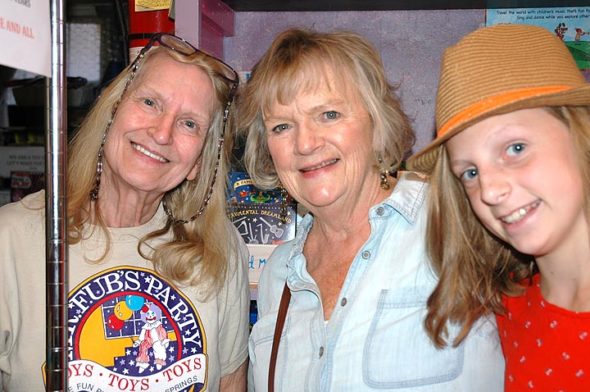 Word that Mr. Fub’s Party toy store is closing with the retirement of owner Priscilla Moore, left, brought longtime patron and former villager Donna McGovern into the shop with her granddaughter, Kennedy, this past weekend to wish Moore well. (Photo by Carol Simmons)

Priscilla Moore, owner and proprietor of Mr. Fub’s Party toy store, has decided to call it a day after 37 years in business.

“My sister told me that when I was ready to retire, I’d know it. And I know it,” Moore said this past weekend from the downtown establishment.

Moore, who briefly considered trying to sell the venture before deciding she preferred simply to close up shop, said she plans to stay in operation until the end of November, or all the toys are sold, whichever comes first.

By the swift and steady emptying of the store shelves this past weekend, spurred on by an outside banner declaring “retirement sale,” it appears Mr. Fub’s might not see November.

Some weekend shoppers were long-time local customers. Others were visitors to town, walking up the balloon-festooned entry steps into the tight, maze-like space for the first time.

But everyone knew something of the independent toy store that has earned a reputation for high quality, developmentally appropriate merchandise and achieved wide name recognition through nearly two decades of underwriting with the Dayton ThinkTV PBS station.

“It’s an institution,” said Debra Mabra, a second-grade teacher at Mills Lawn, who came in to look around Saturday afternoon.

McGovern said the store’s closing brought up sentimental feelings for her. “I bought her first shoes here,” she said of her granddaughter.

The Trillana family, parents Emmanuel and Audra, and their children, Gabriel, 19, Jonah, 17, and Daphne, 12, visiting the store Sunday afternoon, said that Mr. Fub’s had been a special place for their family since they moved to town in 1998.

“I remember the candy,” Gabriel said. “They always had reliably good candy.”

“I remember when Daphne was born we got presents,” Jonah said.

He added that an early purchase of a piece of pyrite may have “sparked my interest in rocks.”

Father Emmanuel noted that the store’s distinctive shopping bag — brown paper covered in small hand-stamped color circles — was always an exciting sight at birthday parties. “It meant you got something good,” he said.

Villager Patricia Schneider, who said she shopped for her daughters, grandchildren and now great-grandchildren at the store, found the closing announcement hard to take in. “It’s really emotional,” she said.

Moore said it’s been emotional for her, too. She hadn’t anticipated the level of community dismay she has heard since her retirement plans became known.

“I’ve been planning to close for about a year,” she said. “There’s a lot of stress and pressure running the business. Lots of decisions.” And she’s looking forward to putting that part of the enterprise behind her. But saying goodbye to customers is still hard. Longtime patrons have become her friends, she said. And she’s enjoyed watching children grow up and bring their own children into the store.

“I’m into the fourth generation now with some families,” she said.

After nearly 40 years, Mr. Fub’s origin story has become imbedded in myth. The tale on the shop’s website of a child’s so- named imaginary friend is itself imaginary, created by Moore’s sister.

But there was a very real little boy, Moore said. His birth name was Ben, but his mother, Jennifer Viereck, Moore’s friend and co-creator in the toy store’s beginning, called him “Mr. Fub.” The nickname came from a word-of-the-day desk calendar. On the day Ben was born, the word was “fubsy,” an adjective of British origin meaning “short and stout.”

Soon after, at the former DJ’s restaurant, a table reservation for the friends designated as “Mr. Fub’s Party” sealed the nascent store’s name, Moore said.

Moore still has the original calendar page framed with a photograph of the young Ben, who she said turned 37 in June and now lives in Santa Cruz with his wife and two children.

Moore and Viereck’s early vision for the store — to stock well-made, high-quality, child-friendly toys — has remained consistent throughout its life, as Moore continued alone after Viereck left within a couple of years.

She said she also never wanted to expand on the store’s compact space — except for adding storage rooms in the back. She liked keeping the shop “child-sized” and welcomed children as serious customers.

“I can remember days when kids would bring in their piggybanks and dump it on the counter.” Some children also put purchases on layaway, paying for a desired item over time.

Moore is proud that children could consider the store a safe place.

She is also proud of her involvement in ASTRA, the American Specialty Toy Retailing Association. Moore was one of 15 charter members who founded the nonprofit national organization in 1992, and she later served on its board of directors. Today, the group has more than 2,500 members, bringing together manufacturers, retailers and representatives alike. “I don’t think there’s another trade organization like that,” she said. Over the years, the group has dealt with a variety of issues, including toy safety as it was was being taken up by Congress.

“We also dealt with the recession,” she said. “For a few years it was difficult for everybody,” but Mr. Fub’s weathered the national financial downturn, she said.

A good staff helped. Moore said she is grateful for all the employees — “Fubettes” — who have worked in the store over the years. Current staff Rebecca Reed and Stefany Lewis said they will miss working at the shop, but they anticipate staying busy with new jobs and home projects. Another longtime employee, Sherry Walker, already left for another job, Moore said.

Moore may have been in the toy business for nearly four decades, but she is also an artist — in fact, a community of local artist friends is why she came to Yellow Springs in the first place in the early 1970s. And making art is how she intends to  concentrate her time and energy once the store is closed. She is also financial manager at the Yellow Springs Senior Center, but getting back into her art is what is calling her.

“I used to be the type of person who couldn’t live unless I was creating,” she said. Too much time has passed since she was an active participant in the art community, she added. “My last show was at the Winds when it was on this side of the street.”

She’s ready to move forward. “All things come to an end,” Moore said. “This is it. My master performance art piece is closing.”