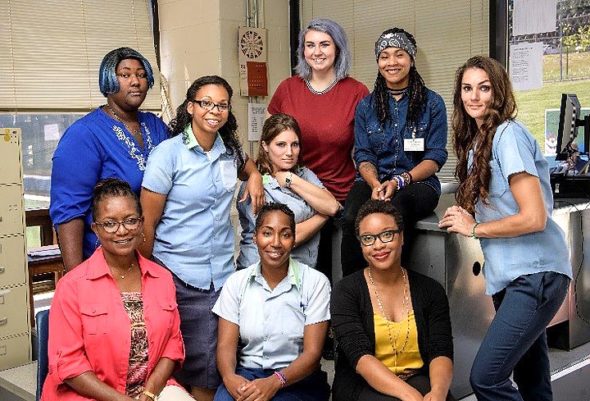 Pens to Pictures— Films give voice to prisoners

The themes that run through the five short films created by incarcerated women through the Pens to Pictures project — which is coming to the Little Art Theatre on Thursday evening, Nov. 2 — are difficult topics.

Aspects of the stories can be rough, agreed project founder, Wright State University Assistant Professor Chinonye Chukwu, but the overarching quality that weaves them together — and ultimately transcends the subject matter — is their humanity.

“These are all human stories,” Chukwu said in a recent phone interview. “You don’t have to be incarcerated to relate.”

An award-winning filmmaker who teaches in WSU’s motion pictures department, Chukwu said the primary experience of the women’s stories is one of isolation.

“Bang” depicts a woman with two starving children and no job who has been rejected by nearly everyone.

“Love or Loyalty” explores the relationship of cellmates as one prepares for release.

“For They Know Not” follows a young woman battling heroin addiction.

“Trans-Parent” is seen through the eyes of a child who has been left to care for her two younger siblings.

“They figure out how to survive,” Chukwu said of the films’ protagonists.

Each of the five women whose films will be screened Nov. 2 at the Little Art were inmates at Dayton Correctional Institution when they signed up for a screenwriting class initiated by Chukwu in 2016.

The participants started by writing a short story, which they then turned into a screenplay. Each was then paired with a Wright State film student or alumna who worked closely with her partner to complete tasks that couldn’t be done inside the prison walls, particularly the filming, which Chuckwa said was completed in 10 days in the Dayton area. Nevertheless, the incarcerated women created the story-boards, oversaw actor auditions and then edited the footage to produce the final films.

Jaimie Ochs, the creator of “Trans-Parent,” who was released this past March after serving 10 years in prison, said that the only writing she had ever done before Chukwu’s class was “just for fun,” and the filmmaking that followed was a whole new world.

Speaking by phone from her home in Dayton, where she is working and going to school full-time in computer engineering, Ochs said that she wanted to make her film from a child’s point of view, because she wanted “to give voice” to a someone who doesn’t “always get to tell their side of the story.” Like many of the women in DCI, she said. “The women there don’t always have a platform to share their voices,” Och said.

Often unheard and unseen by the outside world, it’s possible to “lose sight of their humanity,” she said. “They’re stigmatized for being criminals, for being cruel.” Yet her experience behind bars revealed that many are “humble, caring, spiritual people who just want an opportunity to have a better life.”

The Pens to Pictures program not only gave her a way to share her creative voice while in prison, but also gave her a “network and support system” that has helped her in transitioning to life outside.

Chukwu said that everyone involved found the project transformative. “I think we all grew. We all were empowered,” she said. Most significant was the lesson that everyone has the “potential to be change agents in the world.”

Emily Steinmetz, an assistant professor of anthropology at Antioch College, is part of the Prison Justice Initiative there, which she said includes several projects.

Books to Prisons is one that was started by students a couple of years ago, she said. What began as an effort to send packages of used books to prisoners in Ohio has expanded to facilities across the country.

Patrons of the Little Art screening are asked to donate books to the project. Steinmetz said that all genres are welcome. “The only thing [the recipients have] in common is that they’re in prison,” she said. That said, the most frequent request is for dictionaries,” she added.

Another piece of Antioch’s prison initiative is an “inside-outside” class, which is taught once a year by Steinmetz and comprised of undergraduates and incarcerated women who meet together once a week. Other projects include working with the DCI residents to produce a periodic newspaper and a program last year that paired students with women serving life sentences to build and maintain a vegetable garden and a pollinator garden.

Steinmetz said that as an educator she feels it’s important “for students to actually see what it’s like” for those in prison. The Pens to Pictures project helps extend some of those lessons into the wider community.

Choir director Roma said she was eager to bring the films to Yellow Springs for several reasons.

“Number one, I think the films are quite amazing,” she said.

They share stories that have not been told, and they give voice to women who are often unheard and forgotten.

What’s more, she said she admires Chukwu’s work “using her gifts as a film director and as a teacher … to teach women who are inside how they can learn to use their talents.”

In her own work in prisons, including leading choirs in two other Ohio facilities, Roma said she has “learned there are reasons we need to be critical and learn as much as we can about our prisons — because they are our prisons.”

She noted that “90 percent of those who are incarcerated are going to get out.” They may well be our neighbors, co-workers and family members. Giving them skills and tools to help them be successful benefits the whole community.

“These women are real to me,” she said, adding that Beverly Fears, the creator of “The Devastating Game,” who has also since been released, was a member of Roma’s prison choir, and Aimee Wissman, who made “For They Know Not,” was in a reading-writing group Roma helped facilitate. “I’ve met her mother and her daughter,” she said.

One Response to “Pens to Pictures— Films give voice to prisoners”