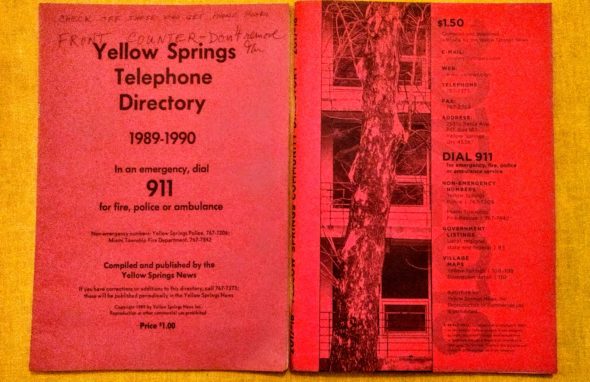 As the deadline for this year's Red Book submissions approaches, we explore the community directory's inception.

Way Back Wednesday — The Red Book

It’s that time of year again — the time of year when we here at the News send out our little yellow cards and entreat the village public to give us their digits. It’s time for the annual updating of The Red Book.

Those who’ve lived in the village for decades might already be familiar with the brief history of The Red Book — officially the Yellow Springs Community Directory, but colloquially referred to by the unchanging color of its cover. Some may remember it as a small — and ultimately pragmatic — act of defiance; others may regard it simply as a quirk; just one of many things that give our village its character. Both are true.

It all began in 1989, when the Ohio Bell phone book, which had up until that time given Yellow Springs its own section within its pages, unilaterally folded the listings for all villagers into its Fairborn section.

Villagers were not pleased with this decision. In May and June of 1989, Roger Lurie and Ruth Bent wrote to the News to express their dismay and to urge other villagers to voice their opinions to the powers that be: 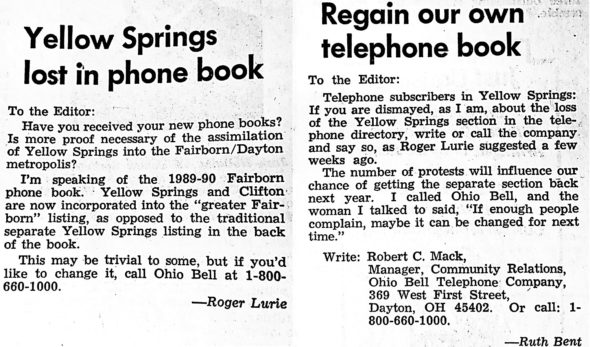 These were the only letters I could find from villagers in the 1989 archives on the subject of Yellow Springs’ symbolic annexation into Fairborn, but one might imagine from the letter writers’ sense of urgency that the topic wasn’t limited to page four of the local paper. Friends and neighbors must have walked down Xenia Avenue talking about the unannounced change, or stopped one another in the aisles of Weaver’s or IGA.

Or at least, this is what I assume from the large, bold ad that appeared on page six of the News the week after Ruth Bent’s letter was printed: 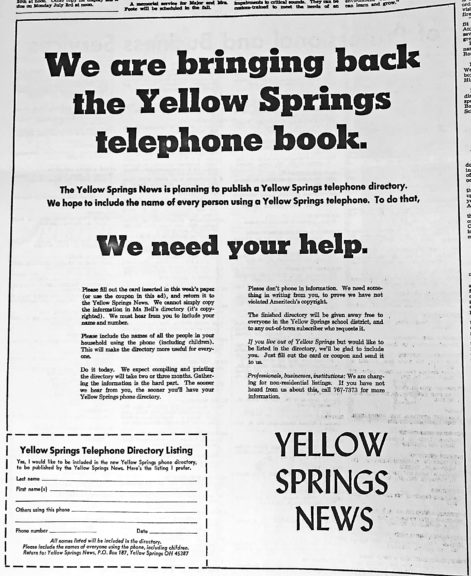 The small print on the ad reads in part:

“Please fill out the card inserted in this week’s paper (or use the coupon in this ad), and return it to the Yellow Springs News. We cannot simply copy the information in Ma Bell’s directory (it’s copyrighted). We must hear from you to include your name and number. … Do it today. We expect compiling and printing the directory will take two or three months. Gathering the information is the hard part. The sooner we hear from you, the sooner you’ll have your Yellow Springs phone directory. Please don’t phone in information. We need something in writing from you, to prove we have not violated Ameritech’s copyright. The finished directory will be given away free to everyone in the Yellow Springs school district, and to any out-of-town subscriber who requests it. If you live out of Yellow Springs but would like to be listed in the directory, we’ll be glad to include you. Just fill out the card or coupon and send it to us.”

And so began several more weeks of page six ads, reminding folks to get their cards in or miss out on the next big thing: 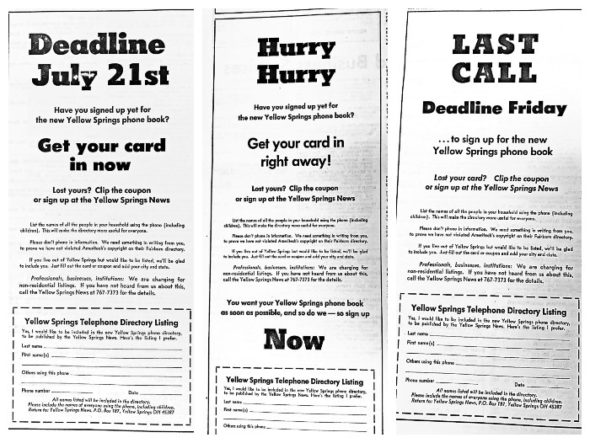 In September of 1989, the very first Red Book was distributed to the village. It was 32 pages long, with 14 pages of business listings and 18 pages of residential listings. Page 13 of the directory offers thanks to Terry Marshall, who was office manager at the News, who “conceived, compiled and carried [the directory] to completion.”

Yellow Springs’ response to losing its own space in the phone book wasn’t just down to a small town’s offense at being lumped in with surrounding environs. The growth of Fairborn around I-65 was beginning to creep its way toward the village. As News editor Don Wallis put forth in his ever-elucidating editorial column, the Phone Book Problem was that most slippery of slopes: first this, then urban sprawl, then loss of greenspace, then … ? Not content to lament, Wallis encouraged his weekly readers to hold Village Council gently to the fire on the issue of sprawl and called for action from Township Trustees. 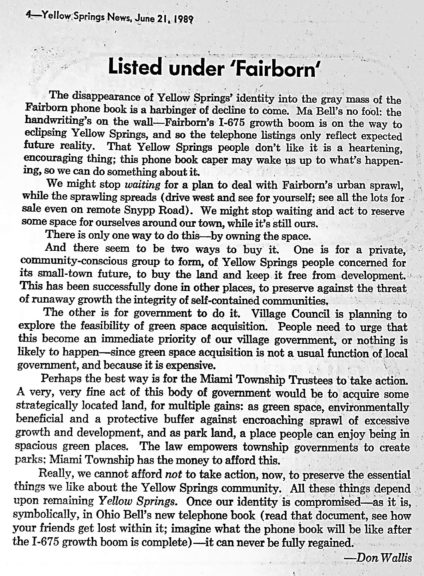 Three decades later, Yellow Springs continues to work to preserve greenspace within (and outside of) its boundaries — with some major victories in recent memory. This is work that will, no doubt, continue for as long as Yellow Springs is Yellow Springs.

But the Phone Book Problem was solved by one office manager — and a whole lot of villagers who sent in their yellow cards.

Which reminds me: if you haven’t sent in your yellow card — or filled out our handy-dandy online form — “Hurry, hurry” and get your details to us this week. Consider this a long-winded, but informative last call. Even if you’ve had your name and number down since the very first Red Book, be sure to get in touch and let us know everything’s still the same. It won’t be copyright infringement now if we copy your number from last year’s directory — so at the very least, look us up in The Red Book and give us a call to let us know you’re still here.