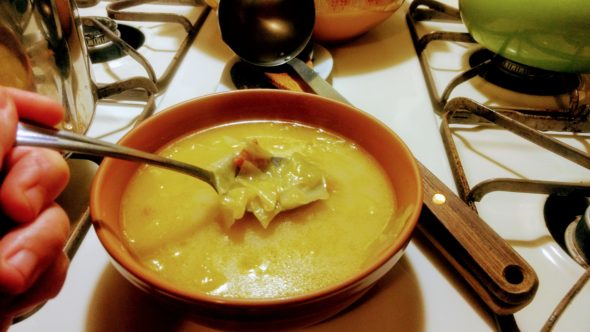 Cabbage soup with sausage and milk.

Of cabbages and kings

There’s a scene in the 1971 move “Willy Wonka and the Chocolate Factory” where young Charlie Bucket’s mom, as she works washing large, hot tubs of clothing by hand, announces that the family is again having cabbage soup — well, “cabbage water” — for dinner. The unappealing-sounding food is a signal — one of many — to the viewer that Charlie and his family are very poor.

I thought about this scene recently as I pulled a head of cabbage from my refrigerator. I am the only person in my house who likes cabbage; it was a food that I did not grow up eating. Though my family growing up was not destitute like Charlie’s, my dad was a rural preacher and my mom worked at Wal-Mart; both worked weekend nights cleaning floors at a large factory for a while. We weren’t exactly living high and wide.

There were times when my family did need governmental assistance; there have been times, as an adult, when I have needed it myself. I’m thinking of this now in light of President Trump’s well-discussed proposal for the American Harvest Box program, which would halve benefits received by those who qualify for the Supplemental Nutrition Assistance Program, or SNAP, and replace these benefits with boxes of pre-packed food items, apparently decided on by the government.

There are many criticisms being leveled at this proposal, from the questionable nutrition of the proposed box items to the lack of infrastructure in place to handle such a program. To those who receive food assistance, or to those who have ever needed it, the proposal might seem just another iteration of the same idea that plagues ideologies nationwide: that poor people are largely unintelligent and dishonest. That they cannot make their own choices when it comes to food. That they will defraud “the system” if given the chance. That those whose tax money helps fund food assistance programs should govern what those who receive are allowed to eat. That they — that we — are less than people.

It has been a few years since I have needed food assistance. I remember going to Kroger essentially in the dead of night to avoid the impatient huffing and muffled choruses of “Oh, God” that would occasionally sound from the line behind me when I’d pull out my WIC coupons, when I had them. Those reactions would stick on me like a skunk’s spray for the rest of the day, and nothing could clean them off.

I’m thinking about this as I attempt to make cabbage soup for the first time, from no recipe. I am happy that I no longer need help — at least for the foreseeable future — feeding myself or my family, and that I can make a dish as simple as cabbage soup because I want to, not because I have to. And nearly as much, I am relieved that I don’t have to sweat under the stares of folks who consider me … I don’t know, it’s hard to plug in the right adjective here. I just know that a free box of food showing up at my house would, in a perfect world, be a fun and happy surprise for me. But in this world, the world where food is not easily attainable by those who are poor and sometimes treated like a luxury by those who are not, such a box would mean something else.

• ½ lb. cooked or smoked sausage of choice (I used summer sausage, because it was a giant half-log leftover from Christmas and you can only eat so much of that stuff on crackers)
• milk/cream

Sautee chopped onions in the bottom of a large pot in light oil of choice; if including sausage, slice and sautee with onions. When onions are transparent, add the chopped cabbage and cook a few minutes. Add broth; bring to boil, then reduce heat and cover. Cook on low heat for 20–25 minutes. For a creamier soup, add some milk or cream to your taste.

(Adjust cabbage to broth ratio as befits personal taste; cabbage cooks down quite a bit, and if you aren’t using sausage, this can be quite brothy.)

This column originally appeared in the March 8 issue of the News.