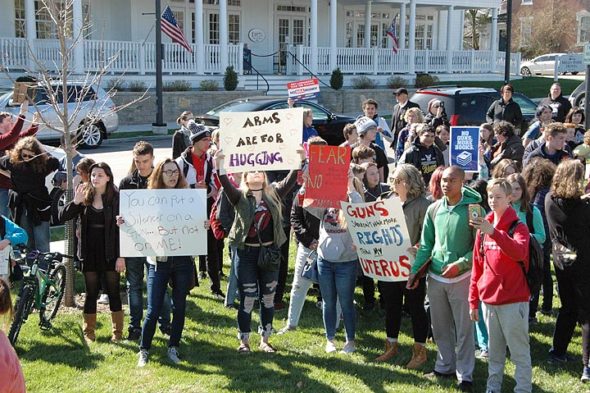 “No more fear” — Students walk out to protest school shootings

Kayla Graham and Matt Minde contributed to this story.

Students from McKinney Middle School and Yellow Springs High Schools participated in the National School Walkout on Friday, April 20, on the 19th anniversary of a mass shooting at Columbine High School in Colorado.

At 10 a.m. the students, estimated at about one-third of the student body, walked out of their classes, marched downtown and gathered in front of Jackson Lytle & Lewis Funeral Home. Students stood atop a soap box with the words “We the People Demand Safe Schools” and read the names of those injured or killed by school shootings since April 20, 1999, intermixed with their own passionate speeches.

As the students marched closer to the heart of downtown they were met enthusiastically from beeping cars which the students echoed with whopping and proudly raising their signs. Chants from the students rang out. “NRA, go away!” and “No more fear, volunteer!”

In interviews with students, a major theme was wanting to feel safe in school and be able to further their education without fear of a school shooting. Alaina Hoff, a senior, said she was “tired of students’ lives being on the back burner to political issues.” But she was validated by the involvement of her peers.

“I am proud of the students all fighting for a cause,” Hoff said.

Eighth-grader Malaya Booth said she was, in part, protesting the National Rifle Association, which “protects the guns not the kids.” When asked if she feels safe at schools, she responded that while she feels mostly comfortable, the recent school shooting in Florida was so “devastating” that it has given her pause.

“There is this little fear in your heart,” Booth said. “It could happen to anyone. It’s really scary.”

Raine Galvin, a senior, said she walked out to send a message to a society that has become desensitized to mass shootings.

“This shouldn’t be considered normal, ” Galvin said. “And we want to put an end to it.”

YSHS/McKinney Interim Principal Jack Hatert praised the students for their leadership and for exercising their voices on an issue that he said is, ultimately, about supporting a safe environment at their school. The walkout was a learning opportunity, he added.

“I think what kids are learning here today is as rich or more rich than what they will learn in the classroom,” Hatert said.

Later in the day a counter protest took place across the street from YSHS/McKinney. The six to eight kids who held the counter protest were not necessarily for gun rights, but were protesting the binary nature of the protest itself. They felt the choice was to go with the protesters or stay in. The group was dismayed because they felt there were no attempts at discourse.

“There was pressure to choose sides, and that doesn’t foster critical thinking. We disagree with that binary choice,” said Delia, an eighth-grader who preferred to go by only her first name, and chief organizer of the action.

“It’s about having your own opinion,” said Rosemary Barret, also in eighth grade.

Read the April 26 issue of the News for the full story.