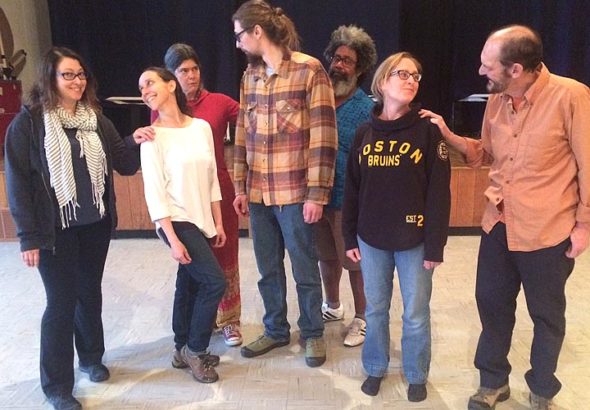 It started with a collection of poems.

Well, the writing was inspired by life; but the poems, composed over a span of about four years, are the basis of an original theatrical work debuting here next week when The Yellow Springs Theater Company presents “when heart beats…,” written and directed by Colton Pitstick.

Performances will be 8 p.m. Wednesday through Saturday, May 9–12, at First Presbyterian Church.

Pitstick, 25, said he began writing poems about his experiences and state of mind in the years after graduating from Yellow Springs High School in 2012. Of the dozens of poems penned during an emotionally tumultuous time, 15 make up the arc of the play, Pitstick said.

An active member of the local theater company who has appeared in multiple productions and written short works for the company’s annual show of 10-minute plays, Pitstick said he started thinking about turning his poems into a theatrical piece about two-and-a-half years ago.

“I had gone to Miriam (Eckenrode Saari, a YSTC founder) with all these poems I had, and said, ‘I think I may have something here,” Pitstick recalled following a rehearsal last weekend.

“She read through them and said, ‘There could be, but not yet.’”

So he got to work, consulting with Eckenrode Saari — who serves as a producer of the production along with Ali Thomas — to shape the individual poems into a cohesive whole applicable to a stage setting.

The result is a multimedia piece that spans the course of a day and night, both literally and metaphorically, according to producer Thomas. The piece involves “about nine performers,” Pitstick said.

It begins with the physical act of waking up, and the first half of the production follows through a variety of daytime activities.

“The second half is like a really long night,” Thomas said, her voice adding stress to ‘really long night’ as she extended her arms wide to suggest a broad interpretation of the concept.

The staging takes various forms, with single or multiple performers acting out the narrative or expressing the text through movement. Sometimes the text is portrayed by the actors’ dialogue, sometimes it is recited while the performers create the scene.

Choreographed movement and dance are a significant element of the production, Pitstick said.

Victoria Walters and Thomas serve as the show’s choreographers, though Thomas pointed to Walters as the primary person responsible.

The choreography helps “bring out the emotions” of the poems, Walters said last week.

“The poetry led to dance, and that led to music,” Pitstick said.

While Guth has selected some Bach works as accompaniment, Jam Salad “came up with this funky, jazzy” flavor, Pitstick said.

Visual art is part of the mix as well, with Whitney Sykes creating original painted panels for the production.

“They’re going to be immersed in art,” Thomas said.

Pitstick said he loves the results.

“It’s an amalgamation of different art forms — a theater equivalent of a collage,” he said.

“It’s easy to say it’s my show, but it’s not, he added. “Every person who’s come on has changed it.”

Walters agreed. “It has taken on a life of its own,” she said.

For co-producer Eckenrode Saari, the results reflect “the spirit in which the [theater] company itself was formed.”

“I’m excited for the company to be producing an original work that utilizes myriad forms of artistic expression and artists into a single piece,” she wrote in an email.

And Pitstick said he deeply values the collaborative aspect of the production.

“It’s the coolest thing ever,” he said. “I’m immensely blessed to have everyone on board.”

Thomas is full of praise for the young man she says she first met when he was a middle-schooler performing in the school district’s production of “Fiddler on the Roof” and she was helping with costumes.

“I think Colton is a genius,” Thomas said.

She appreciates the emotional honesty and vulnerability he reveals in his poems, the subject matter of which can sometimes be difficult.

“He grapples with his hopes, fears, drug use, inadequacy about forging relationships and just the sheer difficulty of getting through the day.”

Tickets for the production are available at the door. Cost is $10 for the Thursday through Saturday performances. Canned goods to be donated to the Beloved Community Project’s food insecurity program will be accepted as admission for the Wednesday night performance.