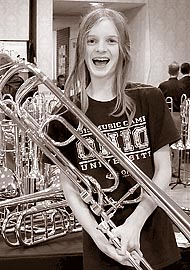 Malawi Lee McDonald passed away unexpectedly at their Yellow Springs home on Dec. 10, 2018, after a long, mysterious illness.

Mala was born March 12, 2003, and spent their early years in Hagerstown, Ind. From the beginning, Mala had an unusual sense of who they were and what they wanted. Their priorities included mastering the skills to join their older siblings’ activities, helping others and wearing the least clothing possible. Mala learned to walk and read long before anyone thought to teach them and would act as math and spelling consultant for Lyric and Ember’s computer games.

Mala thrived in the radical unschooling lifestyle. They loved traveling, exploring nature and helping with our family businesses. They saw themselves as a citizen of the world and an equal to every living thing. Moving to Yellow Springs in 2012 gave them a community of people who cherished their quirkiness and barefoot lifestyle. Mala was a passionate pacifist and committed to a vegan life at age 9. They delighted in the natural world and did not kill mosquitoes or take pleasure in weeding.

When Mala was 10, the McDonalds traded some room air conditioners for an old flute and Mala discovered a new passion. They turned their laser focus to mastering the flute, and then to every other band instrument in the course of a few months. The family was kept hopping locating instruments and ferrying Mala to lessons and rehearsals, first with Miami Valley Music Institute and then Community Band, Wright State Bands, Wittenberg Orchestra, Honor Bands, and many other competitions, ensembles, and festivals. Mala set outrageously high musical goals and then met them one by one. They played tenor sax in Ohio Brass & Electric at 10 and performed on bass trombone with the Yellow Springs Chamber Orchestra at age 11, playing the solo in “Tuba Mirum” at 13. They premiered a set of trombone pieces by Gil Woody at age 12. They saved up for a tour of European brass instrument factories. The Dutch Bass Trombone Open performed Mala’s composition, “Boneo and Juliet,” in 2016. Professional musicians recognized a kindred soul and accepted Mala into their fold without question.

But along the way, something went wrong with Mala’s health. As they became thinner, weaker and more exhausted, they gave up wind instruments and turned to piano, folk instruments, videography and rap music. They loved to explore music stores and pawn shops with their dad and jam on whatever instruments were handy. Mala’s love of geography led us on trips to Mexico, Canada, Iceland, Israel and Palestine in their last year alone. We stayed in Airbnb apartments away from tourist attractions and simply absorbed as much culture and language as possible between the endless medical procedures and specialist visits.

Mala loved to help others and delighted in choosing new recipients for their Kiva International microloans. When they sensed the end was near, they put nearly all their savings into helping small entrepreneurs around the world, with the ambitious — of course! — goal that their rotating loans would eventually add up to $1,000,000. You can honor Mala’s memory by supporting a young musician, eating a vegan meal or making your own Kiva loan.

Mala is dearly missed by their parents, John and Laura McDonald; siblings, Lyric, Ember and heart sibling, Noel Williams; grandparents, Lee and Jeffrey Huntington, of Yellow Springs; and Tom and Kathy McDonald, of Indianapolis; and many aunts, uncles and cousins. A celebration of life will be held in the spring.