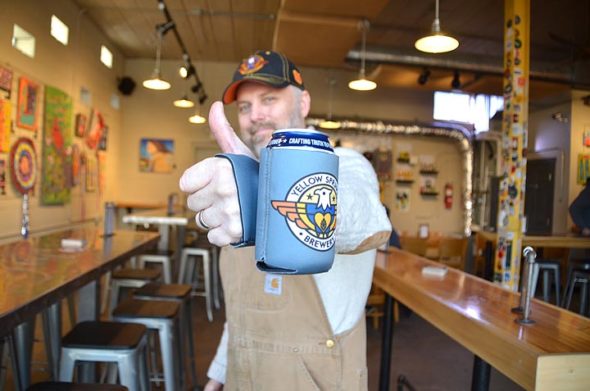 The patent is pending for local entrepreneur Jon Horvath’s latest invention, The Can Hand, an ingenious way to hold a beverage while keeping one’s fingers free for other tasks, such as texting or holding an umbrella. Horvath will host an open launch party for The Can Hand at Yellow Springs Brewery on Saturday, March 2, from 4 to 8 p.m. with games, raffles and refreshments. The brewery was Horvath’s first customer and will start selling their logo-printed Can Hands this weekend. (Photo by Megan Bachman)

“Just dumb enough it might work” is one way grocer-cum-inventor Jon Horvath explains his new creation, The Can Hand.

A multi-tasking tool for the beverage wielder, it’s a coozie worn on the back of your hand, freeing one’s fingers for other uses.

“You can do 100 percent more than you can do with a regular coozie,” Horvath said of his patent-pending invention in a recent interview.

Playing cornhole, using a smartphone, playing cards, holding an umbrella at a sporting event or cradling a potluck plate all while enjoying a beverage are a few possible combinations Horvath suggested. The insulated jacket even holds a baby bottle for the busy parent.

To Horvath, who by day manages a Trader Joe’s store in Kettering, The Can Hand fits in the realm of other gift items like the beer helmet, and is only intended to be partly practical.

The Can Hand will be launched this Saturday, March 2, at Yellow Springs Brewery, with games, raffles and refreshments from 4 to 8 p.m. In addition to hosting his launch, the brewery is also Horvath’s first customer and will start selling their logo-printed Can Hands in the taproom that evening.

Horvath will also be hawking the neoprene sleeves at the upcoming Street Fair — a batch of his own designs — with the help of his sons, Jack, 13, and Ted, 11.

In fact, the venture is a family affair, with Ted taking charge of warehousing and shipping and Jack working on the website. Horvath also sees it as a learning opportunity for the youth, which is why he didn’t want to take any shortcuts in bringing his idea to fruition.

“I have to prove the concept with the kids — they have to see the work that goes into it,” Horvath said. “My goal is that my kids will learn how to take a product from idea to market.”

The idea’s genesis was nearly four years ago, when during a croquet match in the village Horvath and two friends began troubleshooting creative ways to hold a drink instead of putting it down.

“They moved on to other things, helmets and such, but I couldn’t stop thinking about it,” Horvath said of the idea, which Fife gave him permission to pursue. Three months later Horvath called a local leather worker to start working up some prototypes.

Horvath then secured a patent lawyer to protect the intellectual property rights, and he tracked down a Missouri coozie manufacturer, US Poly, to see about production.

US Poly has, in fact, been churning out coozies for three decades, not long after the original patent for the invention was filed in 1981 by Idahoan Bonnie McGough, who envisioned an insulated beverage sleeve stuffed with goose down and likely modeled after the tea cozy. Today most coozies are made from neoprene foam rubber — the same material used in scuba gear.

Horvath pitched the concept to US Poly, which he said receives dozens of suggestions for creative coozie applications each month, and the company agreed to manufacture it for him.

“The VP of merchandising said, ‘I’ve never seen anything like that before,’” Horvath recalled.

Horvath is not new to novel contraption design — The Can Hand is not even his first invention. He’s also come up with ingenious ways to slice pizza and store chips without them turning stale. But those patents have yet to be filed.

Less commercially, Horvath is a master tinkerer who finds joy in solving problems on the fly — and on the cheap — with whatever happens to be lying around.

“I feel like there’s an art in being able to solve situations with what you have in front of you — scraps of wood, leftover screws,” he said. “It’s so much more satisfying than getting the actual piece you need.”

Friends and family have even coined the term “Horvathing” to describe his improvisational brand of ingenuity, which is defined by Horvath himself as pursuing “functionality without conventional wisdom.”

He’s built his own sauna from wood scraps, erected a 600-gallon rain barrel system of his own design and once came up with a quick way to deal with a common nuisance.

“Our basement was flooding once before we had an extra pump so I cut a hose off of a carpet cleaner, duct taped it and ran it out of the window with my kids helping,” he recalled.

Horvath credits both his family and his military service for such skills. His father and brother are engineers, and while in the Marines Horvath earned the reputation as the “MacGyver” of the platoon for his improvising. For the last 14 years, Horvath has utilized the same skills at Trader Joe’s.

Originally from Erie, Pa., Horvath moved to the village with his family in 2008. His wife, Karla, is a teacher’s aide at Mills Lawn and his kids are enrolled in Yellow Springs Schools.

Overall, Horvath has enjoyed the process, especially naming the invention. He now looks forward to the next step — seeing the public response to his brainchild.

“I love to see people’s faces light up when they get it,” Horvath said of such reactions. “But if you overthink it, you don’t get it.”

For more information, attend the March 2 launch or visit https://www.thecanhand.com.