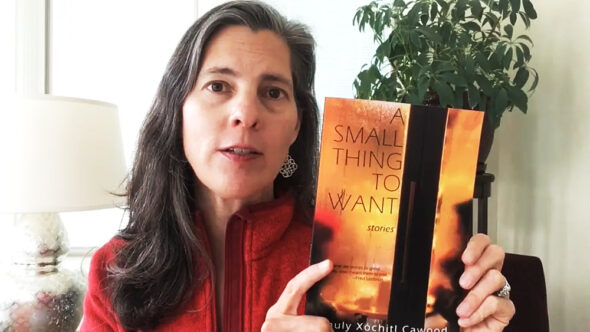 ‘A Small Thing to Want,’ a collection of short stories by author and YS native Shuly Xóchitl Cawood, pictured, was published in May. (Submitted Photo)

“It’s funny — people still kind of think I live in Yellow Springs because I come home a lot.”

Author and YS native Shuly Xóchitl Cawood was home in Yellow Springs once more, visiting her parents, Hap and Sonia Cawood, when she spoke to the News by phone recently.

It’s actually been a couple of decades since Cawood has lived in the village — she’s now in Johnson City, Tenn., with her husband, Preston McKee — but the feeling that she’s still around might also have something to do with the fact that her writing is a presence in the village. Her new collection of stories, “A Small Thing to Want,” was released in May, and was profiled on WYSO’s “Book Nook” with Vick Mickunas. Appearances at the library and the Emporium to talk about the book and celebrate its release were scheduled for this summer — but both were canceled.

“I would have loved to do them,” she said. “But we’ll get them rescheduled one day, when there’s not a pandemic.”

Cawood’s career had its nascency here in the village — she began writing short stories in middle school, efforts which were supported and encouraged by her teacher, the late Esther Rothman. By high school, she’d mostly abandoned short stories in favor of poetry, and spent time working on a high school literary magazine headed up by the late Don Wallis.

“I loved being a part of that — [Wallis] was wonderful,” she said.

Years later, a stint at the Antioch Writers Workshop studying creative nonfiction led Cawood to pursue an MFA in writing from Queens University in Charlotte, N.C., with creative nonfiction the focus of her studies. While working on her master’s thesis, a memoir, Cawood said she began to feel “stuck” within the narrative confines of creative nonfiction — namely, that she had to stick to writing about things that had really happened.

To stretch herself, Cawood began writing fiction again for the first time since she was a teenager. Stretching even further, she applied to her MFA program to study fiction alongside creative nonfiction, and was accepted, receiving her MFA in both disciplines. Her thesis became her first book, the memoir “The Going and Goodbye,” published in 2017.

Cawood said that fiction and creative nonfiction are complementary in many respects, requiring the same elements like plot, setting and characterization — with one seemingly simple, but key, difference.

“In memoir, you have to stick to the truth — with fiction, you get to make all of those things up,” she said.

That difference presented a certain amount of challenge as Cawood wrote the stories that make up “A Small Thing to Want.”

“There’s a lot of freedom in fiction, but you have the whole world to choose from — it can feel overwhelming,” she said. “So it took me a while to really find my voice in fiction — but I did find it.”

“A Small Thing to Want” was published by Press 53, a small, independent publisher operating out of Winston-Salem, N.C. Both this book and Cawood’s memoir were published by small presses, and both times she felt that the advantages were tremendous. She was able to work closely with her editor at Press 53 on “A Small Thing to Want,” and the publisher afforded her more control over the end product than she might have had at a larger press.

“I care deeply about things like the cover and the title, and I had veto power over all of that — you often don’t have control over these kinds of things with a publisher,” she said. “So I was very, very lucky.”

The stories in “A Small Thing to Want” follow a cast of characters from a variety of times and places, many of whom find themselves navigating relationships on the brink of collapse. Cawood said these kinds of stories — stories of who we choose to stay with and who we choose to leave — have always been her interest.

“I write about people in conflict, who either want to get closer or push each other away,” she said. “Even my memoir is about the people we bring into our lives and who we let go of and how hard that can be.”

The stories in “A Small Thing to Want,” written over several years, were all chosen to become part of the collection because they fell in line with this theme. Though most of the stories weren’t written specifically with the collection in mind, a few of them feature a recurring cast of characters, particularly a trio of stories at the end of the book about a couple named Suzette and Mig navigating different stages of their relationship.

Cawood said that “Happy,” the first story in the trio that follows Suzette and Mig, was supposed to be the end of their story — but that Suzette wasn’t ready to be silent just yet.

“She just would not go away until I wrote the next two stories,” she said. “So I blame it on her.”

Cawood acknowledged that she doesn’t go easy on her characters, and that sometimes means that the endings she gives them are nebulous — “it either goes well, or it doesn’t,” she said. She’s fascinated by characters who can’t or won’t communicate their needs and desires to their loved ones, which can often mean that, in the end, they don’t get what they want.

“One of the things that interests me as a writer is what we perceive as barriers to what we want, and how often we are our own barriers.” she said. “These are characters who create their own barriers and don’t realize that they’ve created them.”

Nevertheless, Cawood wanted the collection to end on a note of hope — both in general and for the character Suzette.

“Without spoiling anything for those who haven’t read it, I will say I wanted her character to know that, whatever she did going forward, she was going to be okay,” she said.

She referred again to the story of Suzette and Mig, whose characters in “Happy” are on the brink of divorce. Cawood wrote the story after going through her own divorce “I remembered what that was like in my first marriage — to be at a crossroads with the person you love and you don’t know how to move forward,” she said.

As a writer of both fiction and nonfiction, however, Cawood made it clear that she doesn’t blur the lines between the two disciplines. Places like Chapel Hill, where she lived while earning her MFA, and an unnamed small Ohio town that could double for Yellow Springs, lend verisimilitude to her stories, but all the people she follows through those towns come resolutely from her own imagination.

“I think every story starts with a kernel of truth,” she said. “But these characters aren’t me — they’re themselves, and everything they say and do belongs to them.”

“A Small Thing to Want” is available for purchase online at press53.com and other online retailers. A collection of Cawood’s poetry, “Trouble Can Be So Beautiful at the Beginning,” was the winner of the 2019 Adrienne Bond Award for Poetry and will be released by Mercer University Press next year. Visit shulycawood.com for more information and to read Cawood’s blog, entries from which are published in The Johnson City Press and The News Neighbor, where Cawood is a guest columnist.