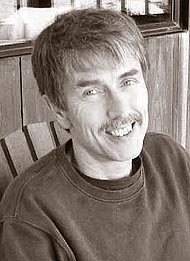 Joel Frederic Jensen, 62, died unexpectedly on Sept. 2, 2020. He was born in Springfield, Ohio, and grew up in the Vale outside Yellow Springs.

Joel believed in living lightly on the Earth and working for social justice and environmental protection. Joel was known for his brilliant mind, quick wit, kindness and generosity. A resident of Redwood City, Calif., for 32 years, he commuted to work by bicycle and loved to hike in the local foothills. He was a member of the Unitarian Universalist Fellowship of Redwood City for 16 years, where he served on the Board, helped maintain and improve the Fellowship building, and had recently joined the get-out-the-vote team.

As an engineer, Joel was recognized for quickly honing in on the most pressing technical challenges of any project and working tenaciously to solve those challenges. He graduated summa cum laude from Ohio University in 1982 with a bachelors’ degree in mechanical engineering. In 1991, he earned his master of science degree in electrical engineering from Santa Clara University. For 15 years, he worked as a senior managing engineer at SRI International, where he helped create the groundbreaking SRI Telepresence Surgery System, a prototype for the robotic technology that allows surgeons to operate more effectively through tiny incisions instead of the large incisions that were required in the past.

For the past 20 years, Joel worked as a principal design engineer for a small consulting firm in Palo Alto, Calif. There, he led over 100 product development projects, including medical devices, robots, consumer goods, sporting goods, security systems and theme park attractions. Joel is named on scores of patents assigned to companies ranging from Apple and Disney to Intuitive Surgical and Starbucks. Outside of work, friends, family and neighbors appreciated his help with wide-ranging repairs and home improvements; it seemed that he could fix and build anything.

Joel was a table tennis enthusiast who could often be found at Pong Planet in San Carlos after work, playing late into the night. He was an avid reader and could discuss in depth an astonishing variety of sciences and social issues. He loved to dance and attend local theater, music and comedy events.

Joel made family a priority in his life, from volunteering at his daughter’s school to going out to comedy clubs and line dance events with his wife to helping relatives follow their dreams. He is survived by his wife of 34 years, Kathy Voss-Jensen; his daughter, Risa Jensen, and her partner, Andrew Dawson; his mother, Martie Jensen; his siblings and their families, Winnie and Tom Church, Raven and Mike Stephenson, Kitty Jensen and Patty Gehring, Marian Axilrod Jensen, Ian and Erica Axilrod and Bjorn Jensen and Natalie Cápiro; and a host of other relatives and dear friends. He was preceded in death by his father, Dave Jensen, in 2002, and his brother, Peter Jensen, in 2005.

A memorial service will be planned for summer 2021. In lieu of flowers, donations may be made to Earthjustice or to the Sierra Club Foundation.